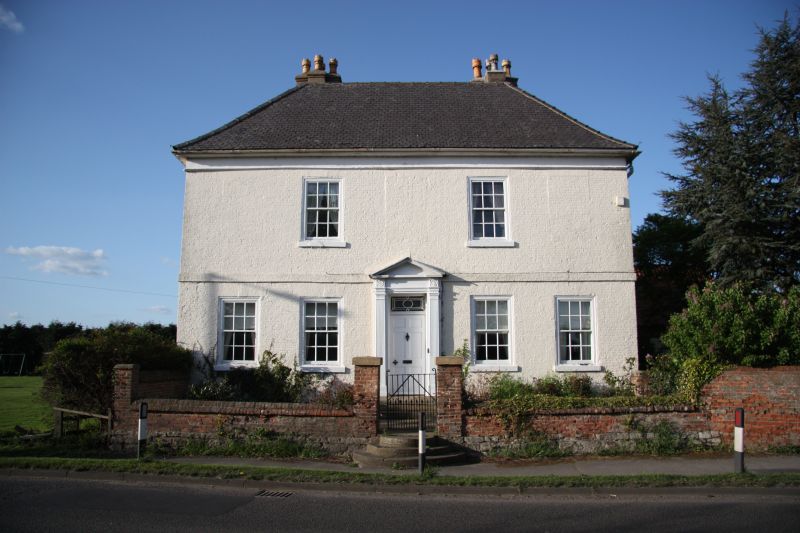 House and attached walls and stable. C17 and mid C18. House
refronted C18. Painted render over red brick with a dressed
coursed rubble plinth. Steep hipped slate roof. Wooden eaves
cornice. 2 rendered stacks each with 4 shafts. 2 storeys, 5
bays with a first floor band. Central doorway, 3 steps up, with
a panelled door and traceried overlight set in reveal and flanked
by single fluted Doric pilasters supportinq an entablature with
paterae and pediment. Either side are 2 glazing bar sashes with
2 similar sashes above. To the riqht, set back, is a sinqle
storey, 2 bay late C18 red brick and pantile stable with dentil
eaves and raised and coped right gable with single pilaster
under. Single small glazing bar fixed light with a doorway with
stable door to the right. Projecting from the left is a painted
brick and pantile lean-to and extending from the right is a
single storey 4 bay red brick and pantile C20 range of
outbuildings. To the rear of the house is a lower wing.
Extending from the south west side of the house is a red brick
wall on a dressed coursed rubble base with moulded brick coping,
after 3 metres this turns at a right angle, drops down and
continues eastwards for 12 metres broken by a central gateway
which has single piers with ashlar copinq and orb finials
flanking an iron gate with 3 semi-circular steps leading down to
the pavement. A higher red brick wall with less elaborate coping
and broken by a gateway with wooden gate extends eastwards for 17
metres. A similar low wall, broken by a gateway with 2 ashlar
coped piers and an iron gate, extends from the south east corner
off the house for 3 metres and meets the front wall. Interior.
The south west room has late C17 bolection moulded panels and
fireplace. The north east room has a large fireplace, now part
blocked, with bressummer. There is a late C17 dogleg staircase
with turned and twisted balusters.