A Grade I Listed Building in Dunham-on-Trent, Nottinghamshire 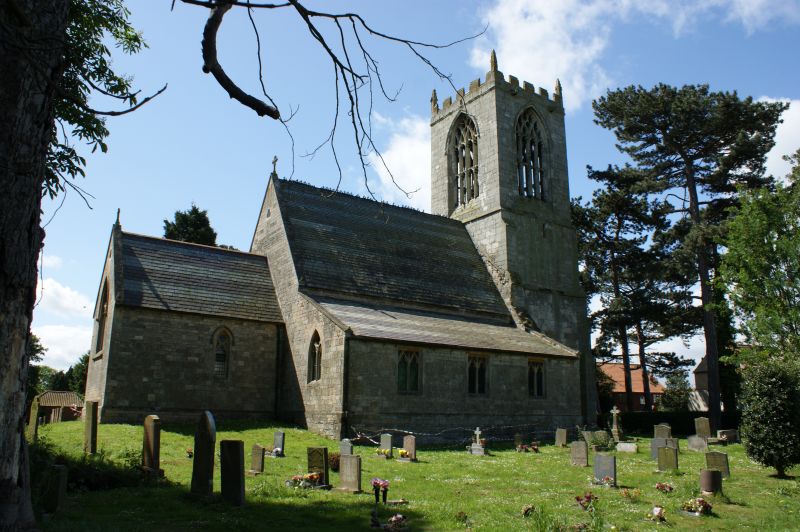 Parish church. C15. With the exception of the tower the church
was rebuilt in 1862. Ashlar. Slate roofs. Coped gables with
single ridge crosses to the east end of the nave and chancel.
Set on a plinth. Tower, nave, north aisle and chancel. The C15
tower with embattled parapet and 4 crocketed pinnacles has 2
gargoyles on the north side and the remains of single gargoyles
to both the west and south sides. The diagonal buttresses are
gabled part way up where they are decorated with crockets. There
are single string courses extending over the plinth and at the
juncture of each of the 4 stages. The west is of 3 stages. West
doorway with pointed arched surround, hood mould, label stops and
wooden door. Above is a single ogee arched and vaulted niche
with 2 bosses, the arch is decorated with crockets, over is a
hood mould with grotesque head label stops and ornate finial.
Above is a single large moulded arched window with 4 lights,
panel tracery, cusping, hood mould, figurative label stops and
finial. There are 4 very large arched andtraceried belfry
openings each with 4 arched and cusped lights surmounted by a
further 4 similar lights. There are 3, 4 and single small
rectangular stair lights to the west, south and north sides
respectively. The east side has evidence of a former nave roof.
The north aisle has 3 two light windows with tracery and cusping
under flat arches. The east wall has a single 2 light arched
window with tracery and cusping. The north chancel wall has a
single arched, traceried and cusped light with hood mould and
head label stops. The east wall has a single 3 light arched,
traceried and cusped window with hood mould, head label stops and
sill band with foliate stops. In the apex is a single trefoil.
The south chancel has a single 2 light window with cusping and
single stone transom under a flat arch. The south nave has 3
arched 2 light Y traceried windows with hood moulds, label stops
and carved head finials. Interior. 3 bay nave arcade with
double chamfered arches supported on circular columns with
moulded capitals and, at the west and east sides, on foliate
decorated corbels. The double chamfered chancel arch is
supported on slim engaged columns with foliate decorated
capitals. The tall double chamfered tower arch has foliate
decorated imposts, the angles below the imposts are decorated
with ribs and there are blind cusped panels at the base. The
south chancel wall has a piscina with cusped and decorated arch
and foliate decorated ogee hood mould, label stops and finial.
To the right is a single sedile with fleuron decorated moulded
arch and similarly decorated hood mould,with foliate label stops.
The reredos and furniture are C19.