A Grade I Listed Building in Fledborough, Nottinghamshire 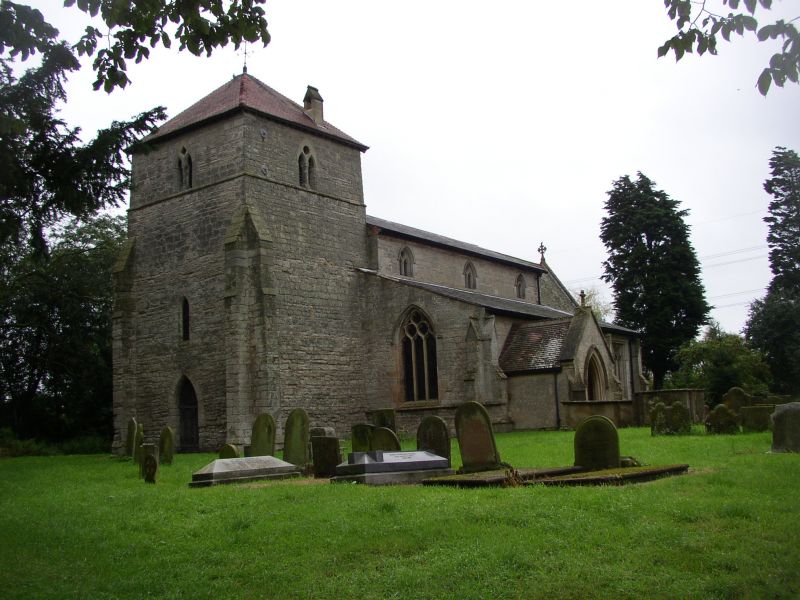 Parish church. C12, C13, C14, C15, chancel shortened C18,
restored 1890 when the chancel was rebuilt. The aisles and south
porch were rebuilt in 1912. Dressed coursed rubble with ashlar
dressings and red brick to clerestory eaves. Slate roofs to all
but the tower and porch which are tile. Coped east chancel gable
with single ridge cross. Bellcote to tower. Buttressed. String
course to all but the tower, south east aisle and porch. Tower,
nave, north and south aisles, south porch and chancel. The angle
buttressed tower of 2 stages with a string course at the juncture
and pyramidal roof has a pointed chamfered arched west doorway
with wooden door. Above is a single chamfered and deep inner
splayed C12 lancet. Inthe belfry are 4 pointed arched C13
openings, each with 2 arched lights divided by a single shaft
with a lozenge cut into the window heads of the east and west
sides and a circle to the north and south sides. There are 2
round tie plates to the south and north sides. The north aisle,
west wall, has a single arched 3 light window with tracery,
cusping, hood mould and label stops. The angle buttressed north
wall is set on a plinth and has a pointed moulded arched doorway.
To the left are 3 C15 traceried windows each with 3 cusped lights
under a flat arch and with hood mould and label stops. The east
wall is also on a plinth and has a single arched and traceried 3
light window with cusping, hood mould and label stops. The
central light is part blocked with ashlar. The C14 clerestory
has 3 arched 2 light windows with tracery, cusping, hood mould
and label stops. The east nave wall has evidence of an earlier
chancel. The chancel is set on a plinth on the north and east
sides. In the north wall is a single C15 3 light window with
tracery, cusping, flat arch and hood mould. The angle buttressed
east end has an arched 3 light C19 window with flowing tracery,
hood mould and head label stops. In the south wall are 2 three
light C15 windows with tracery, cusping, flat arches and hood
moulds. The south aisle east wall has a single blocked pointed
arcade arch, there is also a later blocked doorway. Leaning
against the wall is a hollow, shaped, ashlar coffin. The angle
buttressed south aisle has 3 three light C15 windows with tracery
and cusping under flat arches and with hood moulds and label
stops. Leaning against the wall are 2 slate head stones, that to
John and Eliz. Rayson, 1740, is decorated with a skull and
crossbones, to the right is a head stone to Elizabeth wife of
John Rayson, 1742. Both are engraved with decorative lines. The
diagonally buttressed south porch, with coped gable and single
ridge cross, has a moulded arched entrance with hood mould and
label stops. The interior roof is supported on 5 tranverse
chamfered arches. In the east wall is a re-used sundial. The
inner moulded arched doorway with C16 door has a hood mould and
head label stops. The door is C16. The north aisle, west wall,
has a single arched 3 light window with tracery, cusping, hood
mould and label stops. The south clerestory corresponds to the
north. Interior. 4 bay C13 nave arcades with double chamfered
arches supported on tall quatrefoil piers with fillets and
moulded capitals. The C13 double chamfered chancel arch is
supported on keeled responds. A low chamfered ashlar wall
decorated with small recessed arched panels separates the nave
from the chancel. C12 tower arch, chamfered imposts supporting
the pointed chamfered arch. The west doorway has a round arch.
A sill course extends around the south and west walls, with the
exception of the eastern most bay, of the south aisle. A similar
course extends around the north aisle. In the north chancel wall
is a rectangular piscina with inner traceried and cusped arch,
hood mould and label stops. Over is a small rectangular panel
with 3 sleeping soldiers in decorated ogee arcades. To the left
is a smaller panel with 2 censing angels and a figure of Christ
rising. To the right is a further smaller panel with the remains
of 2 decorated ogee arcades. There are 3 further small remains
of this decorative Easter Sepulchre high up in the wall. Beside
the south doorway is the remains of a stoup. The south aisle
wall has a piscina mounted onto a pedestal with foliate carved
drain. The north aisle east window has an ashlar blocked
centre panel with single corbel for a statue with a canopy over
decorated with cusping and crocketed arches. In the north aisle
wall is a square recess and an arched C14 tomb recess decorated
with a stylised cross, there is an illegible inscription on the
wall behind. Also in the north aisle is a C14 wimpled lady with
rippling hems to both sides and the upper half of a C14 alabaster
knight. In the tower is a monument decorated with a foliated
cross. There are several C18 floor slabs and a hatchment. The
pulpit, octagonal font and furniture are C19. Againt the south
wall is a primitive alms box with iron fittings inscribed
"Remember the Poor 1684". The east window of the north aisle
contains some pale coloured C14 stained glass with 2 figures
under arches in 2 of the lights. There are further fragments in
the north west window, the 2 eastern most windows ofthe north
aisle wall, the north chancel and east and west windows of the
south aisle, south wall. All partly restored C19. C17 nave
roof, other roofs C19.