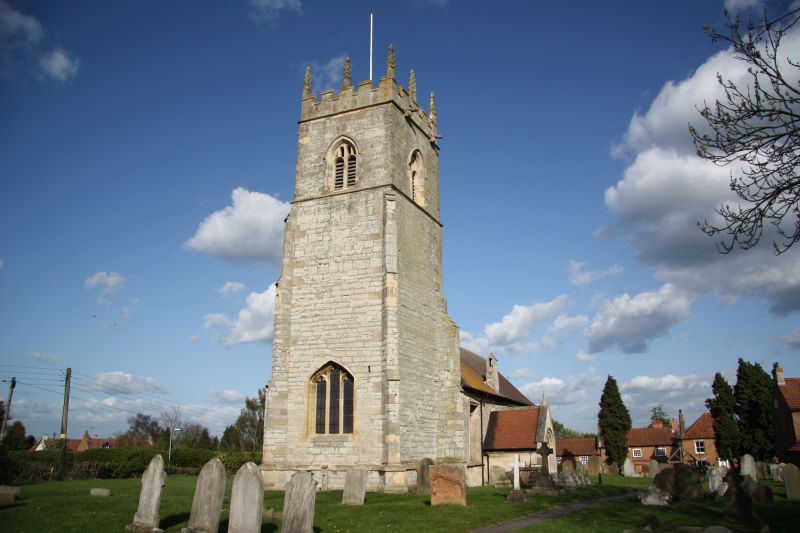 Parish church. C12, C13, C14, late C14, C15, restored and re-
roofed 1863, further restored 1907. Coursed rubble, dressed
coursed rubble and ashlar. Tile roofs. Single stack to south
nave. Tower, nave, south porch and chancel. The C15 diagonally
buttressed tower of 2 stages with a band at the juncture is set
on a plinth with a moulded band over. Embattled with 8 crocketed
pinnacles it has 2 gargoyles to both the north and south sides.
The west side has a single arched window with 3 cusped lights.
There are 4 arched bell chamber openings each with 2 arched
lights and panel tracery. There are single rectangular stair
lights to the west and north and 2 to the south. The east side
has a single clock face. The raised north nave wall has a
continuous sill band broken by the doorway. Single late C14 3
light window with cusped lights and mouchettes under a flat arch
with hood mould. To the left is a pointed double chamfered
arched doorway and hood mould and further left are 3 similar
windows. The C13 coursed rubble chancel has 2 C13 lancets in the
north wall. The buttressed east end has a single C14 arched
window with 3 cusped lights and cusped trefoils over. There is a
single transom and the window is blocked under this. The south
chancel has a single double C13 lancet. To the left is a pointed
chamfered arched doorway. The raised C12 south nave wall has a
continuous sill band broken by the porch. There are 3 late C14 3
light windows with cusped lights and mouchettes under flat arches
with hood moulds. To the left is the 1907 ashlar and tile porch
with coped gable and single ridge cross. Set on a chamfered
plinth with moulded arched entrance, hood mould and label stops.
The inner moulded pointed arched doorway has a hood mould with
head label stops. Further left is a single similar 3 light
window and hood mould. Interior. The inner chamfer of the
double chamfered tower arch is supported on corbels. There is a
C20 screen under. In the north wall at the junction of nave and
chancel and set diagonally is a single niche with cusped ogee
arch. In the south chancel wall is an ogee arched piscina, in
front is the remains of a C13 shaft piscina with nailhead
decoration. The north and south nave walls have single cusped
niches. The late C17 altar rails have heavily twisted balusters.
There is a panelled pulpit. The remaining furniture is C20 with
an octagonal font.