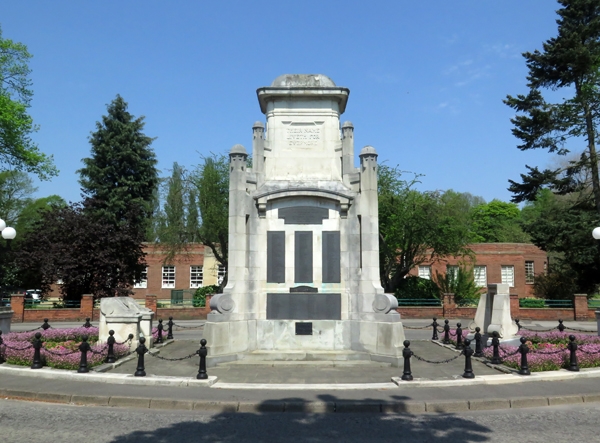 War memorial. 1925. Designed by A. H. Richardson of Worksop.

War memorial. 1925. Designed by A. H. Richardson of Worksop.

EXTERIOR: the memorial comprises a rectangular block in two stages topped by a rectangular domed cap with moulded cornice. It is supported by diagonal flying buttresses, each with two set-offs with scrolled feet, domed caps and cross motifs. On each face of the memorial are inscribed plaques with elliptical pediments on curved brackets.
South face: THEIR NAME/ LIVETH FOR/ EVERMORE/ TO THE GLORY OF GOD/ AND TO THE EVERLASTING MEMORY OF/ THE MEN OF/ WORKSOP PARISH/ WHO FELL IN THE GREAT WAR/ 1914 - 1918/ (Names)/ 1939 - 1945/ (Names)

SUBSIDIARY FEATURES: the memorial stands within an oval kerb with dwarf railing and spiked chains. Standing to the west of the main memorial, a monument in the form of a lectern with chamfered base, cornice and scrolled brackets, with sloping plaque, commemorates the Sherwood Foresters Regiment. To the north and south are splayed, carved and panelled piers each carrying a three-branched lamp standard.

Worksop’s war memorial, in remembrance of local men lost in the First World War, was unveiled on 30 May 1925 by Gen Sir Horace Smith-Dorrien and dedicated by the Rt Revd Edwyn Hoskins, Bishop of Southwell. It was designed by the architect A.H. Richardson, and made by Lidster and Brammer, all of Worksop.

The cenotaph forms part of a wider memorial landscape along the contemporary Memorial Avenue, which connects the cenotaph with the Grade I Priory church, the Lady Chapel of which was restored in 1922 as a further war memorial.

Worksop war memorial, Memorial Avenue, unveiled in 1925, is listed at Grade II* for the following principal reasons
* Architectural interest: a large-scale and architecturally ambitious war memorial;
* Context: as a key element of a wider memorial landscape, extending from the memorial, along Memorial Avenue to the Priory church;
* Architect: designed by A.H. Richardson, a Worksop architect whose work is increasingly well regarded;
* Historic interest: as an eloquent witness to the tragic impacts of world events on this community, and the sacrifices it has made in the conflicts of the C20.