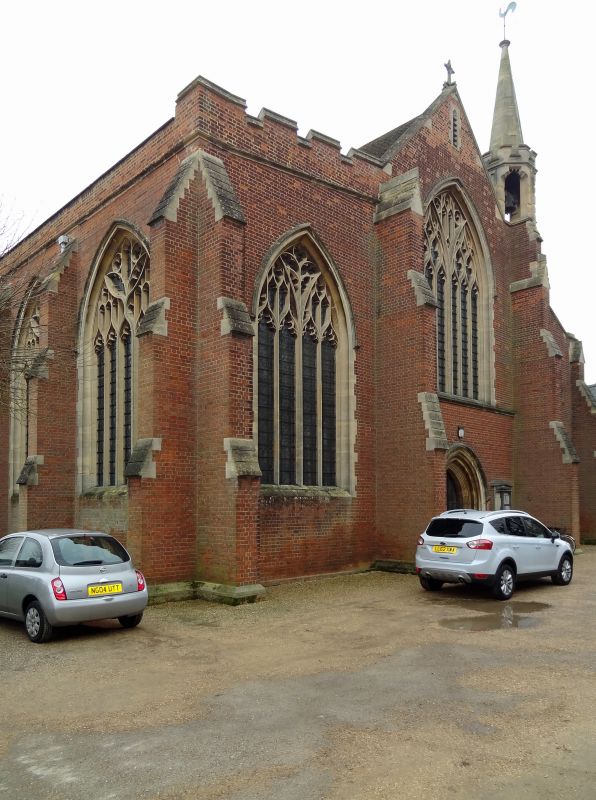 PLAN: Nave, N and S aisles. E end never built and the E end of the nave is used as a chancel.

EXTERIOR: The church, never completed, is primarily in a free Perpendicular style drawing upon the architecture of late medieval East Anglian churches. The nave has a gabled roof while the aisles have flat roofs behind plain brick parapets on the N and S sides. The windows are large and involve both Decorated and Perpendicular forms. The N side was intended as the show facade and has four bays to the aisle which has large five-light windows that fuse both Decorated and Perpendicular forms as was popular for churches around 1900. The Perpendicular S aisle windows are much simpler, being of conventional four-light mullioned-and-cusped design. Each aisle bay is divided from its neighbour by large buttresses with offsets. The W window is set high above a continuously moulded doorway and has mainly Decorated elements in the tracery. Between the nave and S aisle on the S is a small octagonal bell-turret of limestone with a single bell: its sides are open and it has an embattled parapet with an octagonal spirelet. There is no clerestory and the E end ends in a blind wall.

INTERIOR: The dominant feature internally is the five-bay arcading on both sides with tall, wide arches which rise to near the level of the wall-plate. The piers are octagonal and have moulded capitals and double-chamfered arches. The roof over the nave/chancel is six-sided and is divided into square panels by moulded ribs. The S aisle roof is a lean-to while that over the N aisle is almost flat. The rich decoration on the roofs, in cream, red, blue and gold was carried out in 1937 under Comper.

PRINCIPAL FIXTURES: The altar is a commercial copy of an English altar favoured by Comper, but obtained from the Warham Guild. The pulpit is to Comper¿s design but came from St Mary, Iffley (Symondson and Bucknall, p 292), and has traceried Gothic sides and stands on a tapering base. In the aisle windows there is much bottle-end glass. The nave and chancel areas have simply appointed seating.

HISTORY: Built to serve the southern expansion of Oxford at New Hinksey, the church embodies the sense of Anglican mission. The church remained incomplete after 1900 with the eastern parts never being built due to lack of funds. Even the nave and aisles were executed to a rather different design to one shown in a drawing by Benjamin Bucknall (illustrated in Symondson and Bucknall, p. 86) which envisaged gables on the aisles and a tall crocketed spirelet on the NW corner of the N aisle. The buttresses were intended to terminate in pinnacles rising above the parapets. The design appears to have been scaled back to economise but, despite the fragmentary nature of the church as built, it is still a fine, spacious building of good proportions. The tall arches, large windows and late medieval character of the church anticipate Comper's important church of 1902-3, St Cyprian¿s, Clarence Gate in Marylebone, London.

J Ninian Comper (1864-1960) was born in Aberdeen, the eldest son of the Rev. John Comper, a minister in the Scottish Episcopalian Church. He was articled to Bodley and Garner and commenced practice in 1888. From that year until 1908 he was in partnership with William Bucknall (1851-1944). With the exception of the Welsh War Memorial in Cardiff (1928), all Comper's work was ecclesiastical. His first independent building was a chapel added to his father's church of St Margaret of Scotland, Aberdeen in 1889. He was staunchly Anglo-Catholic in his churchmanship and usually worked for like-minded clients. He placed great emphasis on the creation of beautiful settings for worship and designed many fine vestments, beautiful altar furnishings, and church fittings and decorative schemes. As his career progressed he became very eclectic in his work, drawing on both medieval and post-medieval sources and creating what he described as `beauty by inclusion'. He was knighted in 1950.

REASONS FOR DESIGNATION:
The church St John the Evangelist, New Hinksey, is designated at Grade II for the following principal reasons:
* Although never completed, it is of special interest as a very good example of a late Victorian Gothic Revival church in a free Perpendicular style church.
* It is by one of the last great architects and designers of the Gothic revival
* It has a spacious, well-proportioned interior with impressively decorated roofs.