A Grade I Listed Building in Great Haseley, Oxfordshire 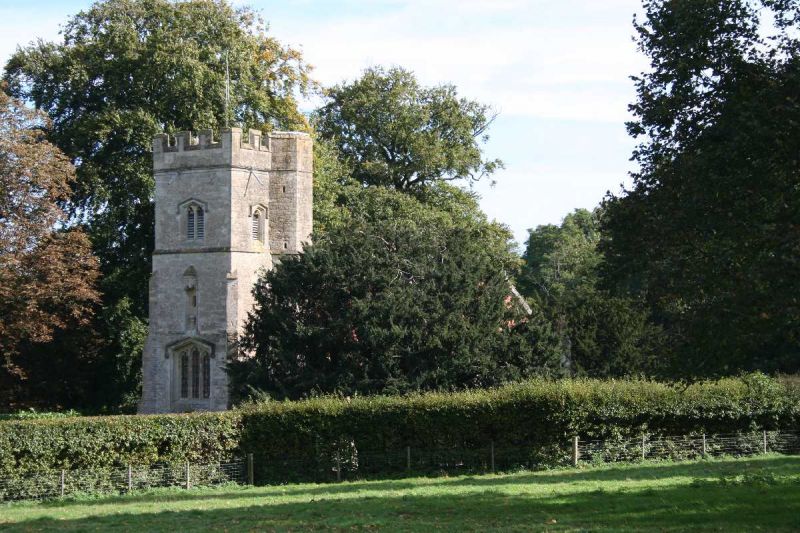 Chantry, now church. Consecrated 1449. Founded by Richard and Sibil Quatremayne
of Rycote. Coursed squared limestone rubble and ashlar dressings from the
Taynton quarries; old plain-tile roof. Nave, chancel and west tower. Nave and
chancel are a single structure of five bays separated by stepped buttresses
which rise above the roof bearing a variety of pinnacles. 2-light side windows
have shallow arches of triangular form with labels, and the 4-centre arched east
window has 5 lights with panel tracery. Towards the west end of the north side
is a fine 4-centre arched doorway with moulded square surround and recessed
spandrels with quatrefoils, and there is a corresponding but plainer doorway on
the south. The 3-stage crenellated tower has a west doorway with pointed moulded
arch above which is a 3-light triangular-headed window and a canopied niche. The
2-light belfry openings also have triangular heads. Interior: Continuous wagon
roof, formerly painted. The bench pews in the nave and chancel and the base of
the chancel screen are contemporary with the building. Of c.1610 are the western
gallery, the wooden pulpit with sounding board, and 2 elaborate canopied pews,
one surmounted by a musicians' gallery reached by the stair to the former rood
loft. The elaborate Baroque reredos is dated 1682 and has 4 flirted Corinthian
columns and a segmental pediment. The barleytwist communion rails are roughly
contemporary. There is a monument of 1767 commemorating James Bertie, Earl of
Abingdon, incorporating a marble bust, and a plaque to Alfred St. George
Hammersley with inscription by Eric Gill. The building and contents are of
outstanding interest, were placed in the guardianship of the Ministry of Works
in 1952 and are scheduled as an Ancient Monument.
(J. Salmon, Rycote Chapel, MPBW Guidebook, 1967; Buildings of England:
Oxfordshire, pp.747-8).