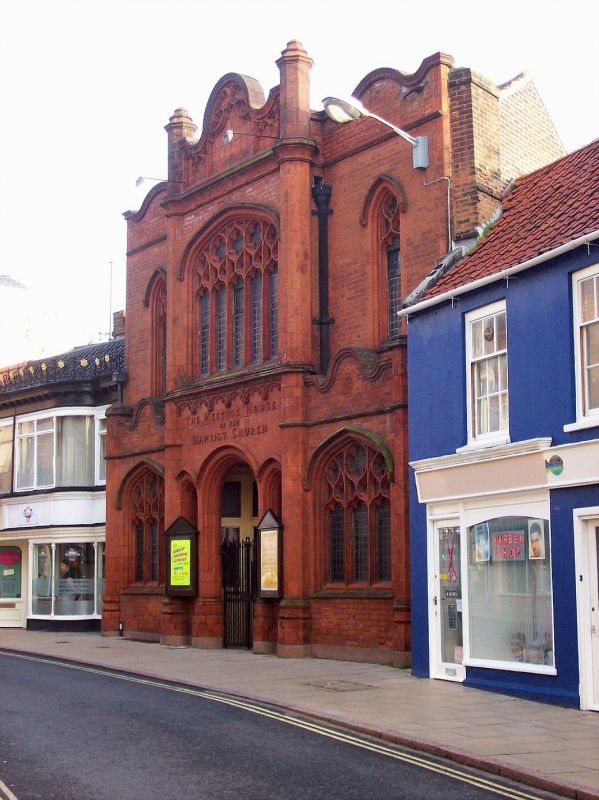 Baptist church, built in 1902 and opened in 1903. It was designed by A F Scott of Norwich and constructed by Girling and Smith of Cromer. The surviving section of the C19 town house, formerly known as Claremont House, is not of special interest and not included in the listing

Baptist church, built in 1902 and opened in 1903. It was designed by A F Scott of Norwich and constructed by Girling and Smith of Cromer.

MATERIALS: of Fletton brick with terracotta dressings and a slate roof.

PLAN: the building is rectangular on plan, aligned north-east to south-west, with the rear section to Surrey Street incorporating part of the C19 house that originally stood on the site.

EXTERIOR: the Free Gothic Revival style principal elevation to Church Street is of two storeys in three bays. Its central entrance bay projects with octagonal shafts rising to finials with a shaped panelled parapet between. To the ground floor there is an arched entrance screen with continuous hoodmould to a recessed porch. It has a central, round-headed archway with wrought iron gates and flanking lancets with wrought iron railings. The porch has an encaustic tiled floor and half-glazed doors with sidelights and fanlights. Over the doorway is a terracotta frieze with blind cusped tracery and the inscription 'THE MEETING HOUSE / OF THE / BAPTIST CHURCH' in relief. To the first floor there is a large, five-light window with a four-centered arch. The two flanking bays are identical and have slightly projecting ground floors with three-light windows with four-centered arches, moulded string courses, shaped parapets and octagonal corner shafts. The first floor has lancets, moulded string courses and shaped parapets. All the windows have cusped ogee heads, quatrefoil tracery and hoodmoulds with foliated stops. The three- and five-light windows also have double-chamfered sills.

The C19 rear elevation to Surrey Street is of three storeys in three bays with the right-hand bay being wider. To the ground floor there is an off-centre recessed porch with a four-centered arch. It is flanked on its left-hand side by two, small horned sashes with a large, three-over-three horned sash to the right-hand side. The left-hand bay has two-over-two horned sashes to the first and second floors while the central bay has blind window openings. To the right-hand bay there is a two-storey canted oriel with horned sashes which rises through the first and second floors.
INTERIOR: the entrance provides access to a small lobby with a parquet floor and vertically-boarded wainscoting to the walls. It is divided from the chapel by a screen wall with a central, three-light window flanked on each side by two-light windows; all with flat arches, stone surrounds and cusped ogee heads. Doorways to the chapel at each end have stone surrounds, half-glazed doors and fanlights with cusped ogee heads. A wrought-iron staircase with elaborate scroll work rises from the lobby's right-hand side to the balcony above. The double-height chapel has a raked, parquet floor and vertically-boarded wainscoting to the walls. It is divided into six bays by a blind arcade of Tuscan pilasters and three-centred arches. The rectangular ceiling is deeply coved and panelled with moulded ribs on simple wooden corbels. At its centre is a leaded, glazed dome. A panelled and canted pulpit with blind cusped tracery, steps and side rails with pierced balusters stands at the north-east end. Behind is a panelled backboard with a shaped pediment, a top row of square panels and a blind arcade of three-centered arches below. It sits beneath a round-headed arch rising from corner pilasters. Laid out in rows in front of the pulpit are bench pews with tongue and groove backs and plain bench seats with shaped bench ends. Attached to the aisle walls are individual, folding seats, all with their own bible stand and brass coat hook. In the late C20 the south-west bay at the entrance end was partitioned and the pews removed to create a meeting room. Above this meeting room is the balcony which is set beneath a three-centered arch carried on large, plain corbels. It has a balcony front comprised of ornamental iron scroll work with pointed arches with trefoil tracery and flora and foliage motifs set above a row of Greek crosses with fleur-de-lys terminals to the arms. The balcony is raked and has bench pews, vertically-boarded wainscoting and a wooden floor. To the balcony doorway there is a panelled screen with small-paned lights. A moveable wooden screen has been constructed behind the first row of pews on the balcony, closing it off from the rest of the church to help conserve heat. All internal woodwork, including the pulpit, reredos and pews, is of pitched pine.

To the right-hand side of the pulpit is a wooden panelled door which provides access to the surviving section of the C19 house which originally occupied the site. It comprises two rooms to each floor which are simply fitted out but retain a small number of original fixtures and fittings including built-in cupboards, panelled doors, dado rails and coat hook rails.

After the Great Eastern Railway extended its network to Cromer in 1877, the town came to be seen as an attractive place to live and visit. Among the new residents were a number of evangelical Christians - known as the Cromer Friends - who sought to establish a Baptist church in the town. In order to achieve their objective they turned to the Norfolk Association of Baptist Churches for help and a small sub-committee was subsequently formed. It comprised, along with a small number of Friends, Harry Gould, Treasurer of the Association, and George Green, later Lord Mayor of Norwich, both of whom were Deacon’s at St Mary’s Baptist Church in Norwich, the county mother church. Although the congregation’s first public service took place in the upper room of the Town Hall on 19 July 1898, it was not until May 1899 that the Association finally revealed that it had resolved to start a Baptist cause in Cromer. In December 1900, the Rev S J Henman of Yalding, Kent, was appointed as the first resident pastor and at a congregational meeting held on 1 January 1901, his proposal to form a church to be known as ‘Cromer Baptist Church’ was carried unanimously. Although the recognition service took place nine days later in the Wesleyan Chapel, early services were then held in the houses of Friends and the dining room of the Imperial Hotel before moving to a classroom at the Board School until a new church could be built. However, despite a growing congregation, no suitable site could be found on which to build a new church. In a bid to resolve this issue, George Green came to Cromer to see if he could find anything suitable and found Claremont House, an empty, C19 town house, for sale on Church Street. He subsequently bought it for £1,600 and then sold it to the Association for the same price. The Association then invited the Norwich-based architect Augustus Frederic Scott (1854-1936) to design a new church on the site and contracted Girling and Smith of Cromer to undertake the building work. Although most of Claremont House was demolished to make way for the new church, its rear section fronting Surrey Street was retained for use as a vestry and Sunday school. The building work was completed by the end of 1902 and the Church opened for public worship on 1 January 1903.

Cromer Baptist church, built in 1902 and opened in 1903, designed by AF Scott of Norwich and built by Girling and Smith of Cromer, is listed at Grade II for the following principal reasons:
* Architectural interest: its unaltered Church Street elevation is a well-executed composition in a Free Gothic Revival style;
* Interior: it retains the majority of its original fixtures and fittings, including its pulpit, backboard, bench pews and unique folding seats to the aisle walls;
* Group value: it forms a group with Nos. 18 to 28 (even) Church Street; the Albion Hotel, Church Street; and Nos. 1 to 7 (consecutive) The Gangway, all listed at Grade II.