A Grade I Listed Building in Ault Hucknall, Derbyshire 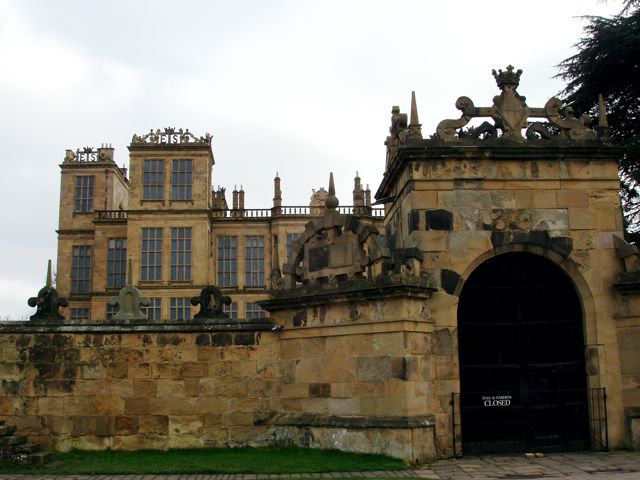 Country house now owned by the National Trust. 1590-1597, probably by Robert
Smythson, for Bess of Hardwick, Alterations 1788. Service wing 1860 by S. Rollinson
of Chesterfield. Sandstone ashlar, roofs hidden behind parapets. H-plan , with a
double stepped extension at each end. Two storeys, with three storey towers, each over
a basement storey. Moulded plinth, moulded string courses between each floor, and
moulded eaves cornice. Openwork parapet and scrolled parapets enclosing the initials
ES. West elevation of 1-1-2-6-2-1-1 symmetrical bays. The two bay parts are
projecting towers. The centre six bays have to the ground floor a flat-roofed
colonade on eight Tuscan Doric banded columns. Within is a central doorway with
moulded architrave and pair of doors. Flanked on each side by three 3-light
mullioned and transomed windows, with ovolo mouldings. Moulded sills on brackets.
The two storeys above have the centre two bays advanced, with a chamfered corner to
the upper storey. Two 4-light windows, flanked on each side by pairs of 3-light
windows. Two transoms to the lower tier and three transoms to the upper tier. The
chamfered angles of the advanced bay have single light windows with three transoms.
The projecting tower bays have pairs of 3-light windows placed close together, with,
from the basement, one, two, three and two transoms. Similar 3-light windows to the
return elevations. Extruded angle bays set back to the right have again similar 3-
light windows. Tower bays to north and south repeat the elevations of those to the
west and the elevations are symmetrical, having the return elevations of the east and
west fronts. The east front is the same as the west except that it lacks the central
doorway. Two storey service range to the north of c1860 by S. Rollinson. This has
3-light recessed and chamfered mullion windows and a balustraded parapet. Interior:
The plan of Hardwick is exceptional for its date, having the hall placed symmetrically
and at a right angle to the facade. The decoration is rich in contrast to the
severity of the exterior to Flemish pattern books and to Serlio. The hall has a
screen dividing off a lobby rather than the traditional passage. It was carved by
William Griffin and has remarkably correct Roman Doric columns. It supports a first
floor gallery providing access across the front of the house. Chimneypiece with
strapwork and overmantel with the Hardwick crest. Plasterwork by Abraham Smith. The
pantry is to the south, the buttery and kitchen to the north. The main staircase is
to the south and the secondary staircase to the north, by the lower chapel which was
originally open through two storeys and was converted into the Steward's room c1800.
The main staircase is grand in a severe way, broad and shallow flight of unadorned
stone steps. They lead to the drawing room which has plaster over-doors. The stairs
lead on up to the state rooms. The Long Gallery runs the full length of the east
side, 166 feet long. The Long Gallery has three huge bays and on the back wall two
large fireplaces probably by Thomas Accres, loosely based on designs by Serlio, with
coupled banded pilasters below and black columns above. In the middle are figures of
Justice and Pity in oval frames surrounded by vigourous strapwork. The figures were
added later. Frieze by John Ballergon. The High Great Chamber fills much of the
west side of the house. Coloured plaster frieze by Abraham Smith, with forest
scenes. Panelling. Fireplace attributed to Accres, with the Royal Arms by Smith over
it and breaking into the frieze. The Withdrawing room is in the centre of the west
front and has a large alabaster relief of Apollo & the Muses, brought to the house in
the C19. To the north are two lower rooms; the Green Velvet Room which has a
fireplace with a central figure of Charity, carved and inlaid by Nayll, Mallery and
Accres. The Blue Bedroom has an overmantel carved with the Marriage of Tobias,
probably not original to the house. The back stairs descend to the Dining Room which
has an overmantel with strapwork and female nudes. The Cut Velvet Room has a
strapwork overmantel with a relief of Ceres by Smith. The Chapel has a simple
panelled screen. Other rooms have similar Elizabethan chimneypieces as well as some
early C18 panelling and decoration.
Sources:Robert Smythson & the Elizabethan Country House by Mark Girouard, Yale
University Press 1983.