Church of St Mary the Less 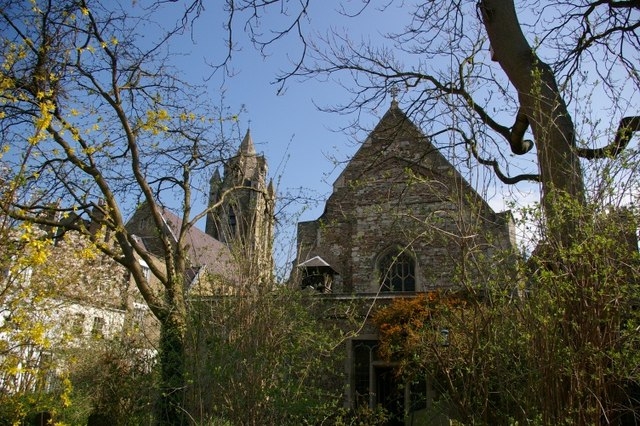 II*
The church is pre-Conquest in origins, but only a reset fragment of interlace ornament survives from that period. Part of the W tower is C12. The church was almost rebuilt 1340-52 to serve as the chapel for Peterhouse college, and it was attached to the college by a gallery stair. There was apparently an intention to have a western transverse ante-chapel in the manner of Merton College, Oxford, but this was never built, and the westernmost bay adjoining the tower was completed or rebuilt in the C15. Other work in the C15 included new tracery in the side windows, at least on the N, and possibly the reroofing of the whole building, as a scar of a low-pitched roof is visible at the W end, although the roof was also redone in the C17. A chantry chapel was added on the N in 1443 for Thomas Lane, Master of Peterhouse; the S porch was added in the mid C15 by John Leedes, d.1455, bursar of Peterhouse; the vestry was rebuilt and partially converted to a chantry chapel for John Warkworth c.1487; and a chantry was added on the S side in the early C16 for Henry Horneby, another Master of Peterhouse. The church was refitted in 1741. The tower, standing in the mid C18 fell or was demolished before the mid C19. The church was restored in 1856-7 by Gilbert Scott, and again in 1876 and 1891. The 1876 work probably included rebuilding the roof in steeply pitched form. The parish room and lower part of a new tower were built in 1892, and the S chapel was built in 1931 to designs by T H Lyon. There were further repairs in the C20.
MATERIALS: Rubble, mostly ashlar faced inside and out, with some repairs in brick. Barnack stone dressings, Collyweston stone slate and lead roofs.

EXTERIOR: The building is undivided externally. Its height is emphasised by the large, tall windows, steeply pitched roof and offset buttresses reaching the full height of the walls. It is largely mid C14 in appearance, but this is partly the result of C19 restoration that altered the late medieval or post-medieval roof pitch and the C15 tracery on the N side. The very large E window is C14 and has six lights with excellent flowing tracery. It is surrounded by three C15 statue niches, those on the sides with vaulted canopies, that below with a projecting pedestal on an attached shaft. The E end was refaced in 1963.

There are four C14 windows in the N wall all of four cinquefoiled lights, restored in the C19, which almost fill the bays between the buttresses. A similar window in the fourth bay is blocked. The westernmost window in the N is C15, but with the tracery restored in a C14 style.

The windows in the S wall are similar to those on the N, but more irregular in their arrangement. The E end of the S side is largely hidden behind the S chapel, the stair to Peterhouse and the SE vestry. The westernmost window on the S is C15, and the W wall has a three light C15 window with vertical tracery. The S vestry is C14 in origin, but was rebuilt in the late C15 and has two C15 E windows and one in the S wall. There are two small openings in the E wall to let light into the ossuary below the vestry, an unusual fixture relating to medieval burial practice. A fragment of Anglo-Saxon interlace ornament is built into the S wall of the parish room. The scars of the older tower and the former, lower pitched roof are visible in the W gable of the nave.

INTERIOR: The interior is lofty and light, with very large windows. There is no internal division, although there was formerly a screen between the 3rd and 4th bays. The windows have shafted splays and moulded rerearches, the C15 windows at the W end with taller bases on the shafts than the C14 windows. The E window is flanked by ogee headed niches, largely rebuilt but incorporating some earlier fragments. The first window on the S has blind tracery that is carried down to form a 4-bay piscina and sedilia. There is a blocked door and C15 tomb recess in the N wall for Lane chapel, and the former Horneby chapel, now the ante-chamber to the S chapel, has an early C16 door and contemporary arch for a tomb recess with an elaborate ogee frame. The S chapel has a barrel vaulted roof and a statue niche opposite the door. The ossuary below the vestry has a C14 brick vault with clunch ribs and a central, octagonal pier. The C12 tower arch is of two, plain round-headed orders and has quirked and chamfered imposts. There is a square headed door above the tower arch. To the NE is a half arch that awkwardly joins the tower to the C15 N wall.

PRINCIPAL FIXTURES: The four-bay piscina and sedilia composition formed by carrying down the mullions of the 1st window on the S side is C14. The individual bays have miniature vaults. There is a simpler C14 piscina in the S vestry. The C14 font is octagonal, and has shields painted in the C17 with various arms. The stem has blind tracery panels and shafts at each angle. The richly carved cover is dated 1632. There are Hanoverian Royal arms, probably part of the 1741 refitting. The stem of the pulpit of 1741 is the sole survivor of a complete C18 refurnishing of the church. The hexagonal pulpit, with a matching hexagonal sounding board, and enriched panels in each face, one with an IHS monogram, was rebuilt in 1900. C19 nave benches with square ends with blind tracery panels. The high altar, with riddel posts is 1913 by Ninian Comper. What is apparently the former C19 reredos with rich carving, including figures of saints, is hung on the W wall of the church. There is some good C19 glass, including the W window of 1886 by Kempe.

Monuments include a C13 or C14 coffin lid, with indents for a later brass, and some good C18 and C19 wall tablets, including one for Godfrey Washington, vicar, d. 1729, a relative of President George Washington. There are also two brasses, one for John Holbrook, d.1436, Master of Peterhouse, the other of c.1500, also for an academic.

Two small fragments of Anglo-Saxon interlace carving are reset on the outside of the parish room.

HISTORY: The church originates from before the Conquest, and was apparently founded and served by a small clerical dynasty, passing from father to son. It was originally dedicated to St Peter and was called St Peter outside Trumpington Gates to distinguish it from the other St Peter's by the castle. Perhaps in response to growing pressure on parish clergy to be celibate, the last in this dynasty, Henry, gave it to the Hospital of John the Evangelist c.1197-1207. Its revenues were appropriated to the hospital, but it remained a parish church. In 1286 it was transferred to the new foundation of Peterhouse and was used as the college chapel until 1632, although it retained parochial functions also. By 1340 the church was said to be 'old and ruinous' and the scholars were not using it. By 1352, however, the new church was sufficiently complete to be consecrated, when it was rededicated to St Mary, distinguished from the other St Mary's as St Mary the Less. Peterhouse was founded by a bishop of Ely, and architecturally, St Mary the Less appears to have been influenced by the Lady Chapel at Ely Cathedral, and the chapel of St Etheldreda's at the bishop of Ely's London residence. The church always retained its parochial functions, and in 1632, when a chapel was built within Peterhouse, it reverted to purely parochial use. It was refitted in the Georgian style with panelling, box pews, a choir gallery and a central pulpit in 1741, but all of this except the pulpit was removed when the church was restored in a Gothic style in 1856-7 by Sir George Gilbert Scott, one of the most important church restorers of the mid C19. Other changes, such as removing the Jacobean roof and giving it a stepper pitch were also intended to give the building a more Gothic appearance. The architect of the S chapel, Thomas Lyon, was also the architect of the chapel of Sidney Sussex College.

REASONS FOR DESIGNATION
The Church of St Mary the Less, Cambridge is designated at Grade II* for the following principal reasons:
* Interesting church of c.1340-52, built to serve as the chapel for Peterhouse with a fine E window and a gallery linking it to the college.
* Unusual C14 ossuary.
* Noteworthy C14 font with a C17 cover.
* Restored in the C19 by Sir George Gilbert Scott.
* Very strong group value with other neighbouring buildings on Trumpington Street, in particular Peterhouse.