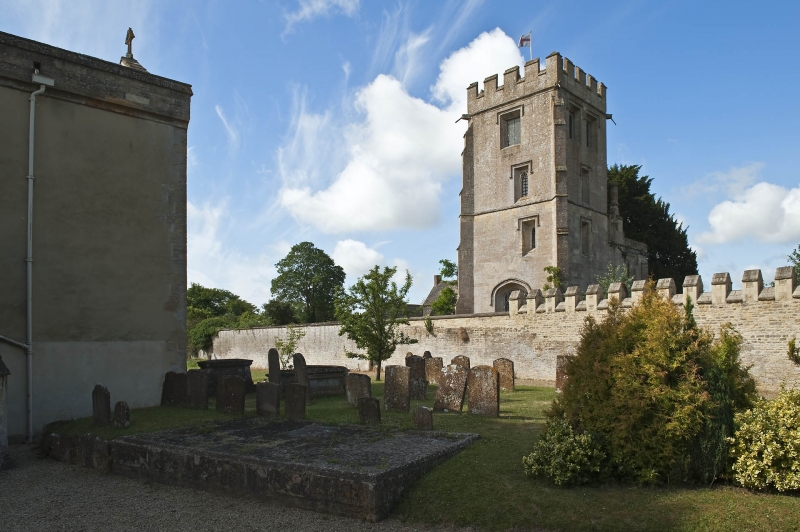 Former chapel. c.1470-71, probably by William Orchard for Sir Robert Harcourt.
Limestone ashlar; roof not visible. 4-storey tower with nave, and 2-storey bay
with chancel to right. Eared architrave over keyed hollow-chamfered arched
doorway to C16 panelled doors, and hood moulds over two 2-light
cinquefoil-headed windows to nave and room above; offset buttress to right,
moulded cornice with gargoyles and octagonal crenellated stone stack. Tower has
hood moulds over one- and 2-light cinquefoil-headed windows, and square-headed
upper-lights. 3-light panel-tracery window to east (left). Crenellated parapet
with gargoyles beneath. Stair-turret to rear with slit lights and similar
parapet. Similar windows to sides and rear, and hood mould over late C15
four-centred hollow-chamfered rear doorway. Interior: chancel has a fan vault on
head corbels and hollow-chamfered chancel arch with quatrefoil spandrels. Nave
has quartered and moulded beams to panelled ceiling, originally painted, and
pointed arched doorway with plank door to stone newel stairs with similar
doorways and ancient plank doors. Room above nave has moulded beams and moulded
stone fireplace. Tower: early C17 panelling and similar stone fireplace. Tower:
early C17 panelling and similar stone fireplace in first-floor room, moulded
beam in room above, and late C17 bolection panelling in third-floor room.
Formerly attached to the parlour end of the medieval manor house, demolished
c.1750. The nave of the chapel was used by servants and was recorded (in 1818)
as having been decorated with red and gold to the beams and gold stars on a blue
ground to the panels. The family, assembled in the room above, could view the
altar through a squint (now blocked). The tower possibly provided lodgings for
the priest or lord's retainers, and its design is similar to those at Minster
Lovell Hall and at Magdalene College, Oxford, also by William Orchard. The tower
derives its name from Alexander Pope who stayed here in 1717-18, when he used
the upper room in the tower to translate the fifth volume of Homer's "lliad".
(Buildings of England: Oxfordshire, p.782; National Monuments Record; M. Wood,
The English Medieval House, 1965, pp.173-4, 239; Bodleian Library, M.S. Top,
Oxon for late C18 and C19 drawings).