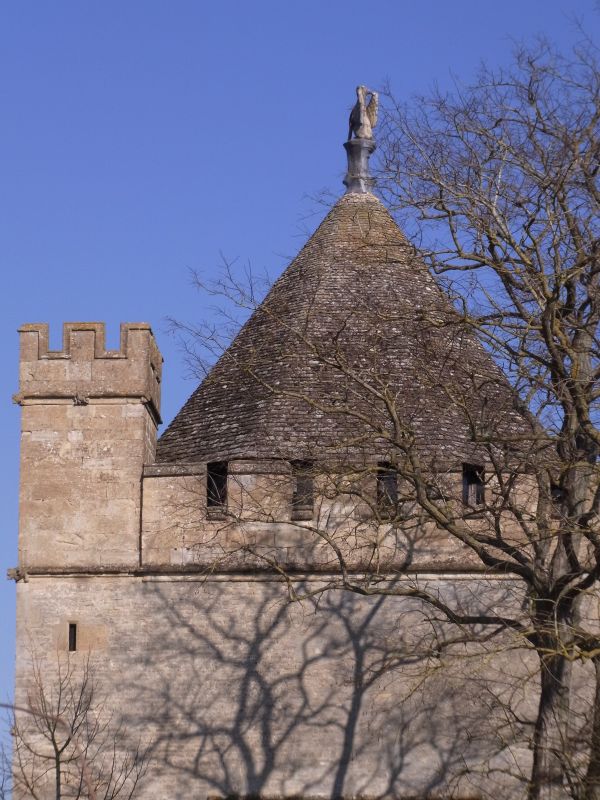 Kitchen. c.1485, with possible earlier origins. Coursed limestone rubble;
conical stone slate roof surmounted by lead griffin. Tower of square plan and
open to roof. Front of tower has hood mould over three C15 two-light
trefoil-headed windows. Gargoyles to cornice beneath crenellated parapet; stair
turret in left corner has slit lights and similar parapet. Offset buttresses to
left; rear wall has hood moulds over two C15 two-light trefoil-headed windows
and over a wide blocked 4-centred arched doorway. Now entered via C15 doorway in
rear wall of Manor Farmhouse (q.v.). Interior: left side wall has 3 ovens, one
with medieval door, an aumbry and a C15 plank door with decorative iron hinges
to stone newel stairs. Wall opposite has 2 screen walls flanking spaces for two
fires. The smoke escaped through 2 rows of six pointed louvred vents in each
bay, still situated under the eaves of the roof, which were regulated from a
passage behind the battlements. Squinches support an octagon which takes the
roof: head corbels in each corner support arch-braced squinch arches with
traceried spandrels and eight arched ribs meeting at the apex; 3 tiers of arch
bracing to purlins. One of the finest medieval kitchens in existence. Formerly
attached to the service end of the medieval manor house, demolished c.1750.
(Buildings of England: Oxfordshire, pp.782-3; National Monuments Record; M.
Wood, The English Medieval House, 1965, pp.251, 253. and plate 20A; Bodleian
Library, M.S. Top, Oxon, for late C18 and C19 drawings).