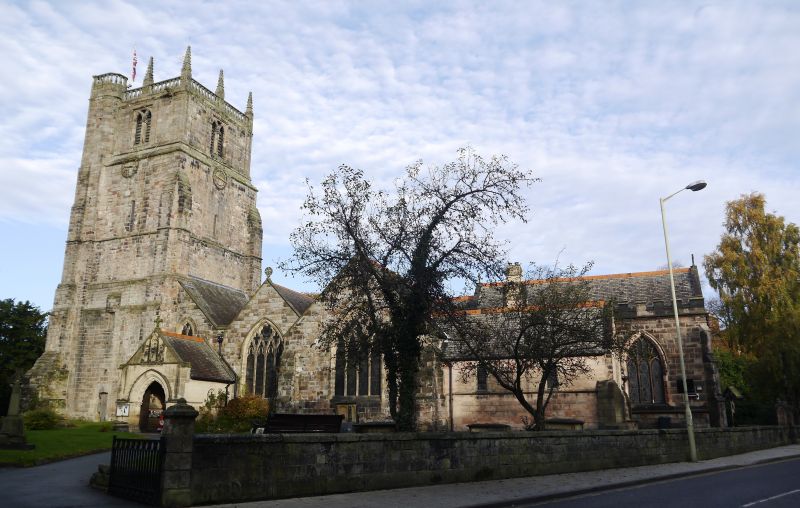 Tower: late C12/early C13 to bottom three stages, which have prominent stepped angle buttresses and an integral stair turret to south west corner; scattered lancet and narrow round-headed openings either original or C17 with rectangular opening to first stage on south side; below this is a slightly cambered doorway with nail-studded plank and muntin door and lintel recording the names of the church wardens in 1692; this is probably the date of the re-building of the top stage when the balustrade, crocketed corner pinnacles and two-light belfry windows were added; the large window with intersecting tracery on the north face of third stage is also of this period; blocked doorway beneath [obscured by ivy at time of re-survey (1985)] probably c.1662.

Nave: hidden by aisles except for late C19 west window and pointed doorway considerably restored by Street; in angle with tower and actually belonging to south aisle is a late C17 window; the aisle has a gable to south with a late C19 Decorated-style window and has a lean-to roof abutting east face of the tower, gabled ashlar porch by Street has good moulded arch resting on columns with natural leaf capitals; south transept also has a late C19 Decorated-style window, although the stonework like that of south aisle is of medieval or C17 appearance, late C19 vestry projecting to east.

Chancel and flanking chapels probably late C17 and present three gables to Church Street, windows all C19, although east window with its curious mixture of reticulated and panel tracery is said to be an 1861 copy of an earlier window; south chancel chapel much re-built and embattled parapet added c.1830; north transept entirely by Street on east and west sides but north wall is earlier and has a blocked doorway bearing names of four churchwardens in 1715; buttressed north aisle has three late C19 windows with panel tracery on north side and one on west, probably copies of late C17 windows, west bay on north left blind.

INTERIOR: almost entirely of late C19 appearance and dominated by Street's restoration, the most curious feature being the two octagonal piers set very close together at the east end of four bay nave arcades; south aisle and transept arches also by Street but the pointed three bay arcades with octagonal pillars to chancel are either late C14 or C17; arch-braced collar-beam roofs to nave and aisles and panelled wagon roofs to chancel and flanking chapels all by Street, as are transept roofs; round-headed doorway to north side of tower has late C12 appearance but is probably C17.

Most of fittings and furnishings including font by south door, stone pulpit, marble reredos (1880) and wooden parclose screens to chancel by Street but octagonal font with spread-eagle carving to one of sides in north aisle is dated 1662; long oak chest with iron hinges in north transept and chest with traceried decoration in south transept probably both partly medieval; some C16/17 panelling is re-used in one of chancel benches and there is a small panel fixed to east wall of tower; stained glass all mid to late C19 and south transept war memorial and reredos by Sir Giles Gilbert Scott.

A church is recorded at Oswestry in Domesday (although it was possibly not on this site) and it is likely to have originated as a minster foundation.