A Grade I Listed Building in Worthen, Shropshire 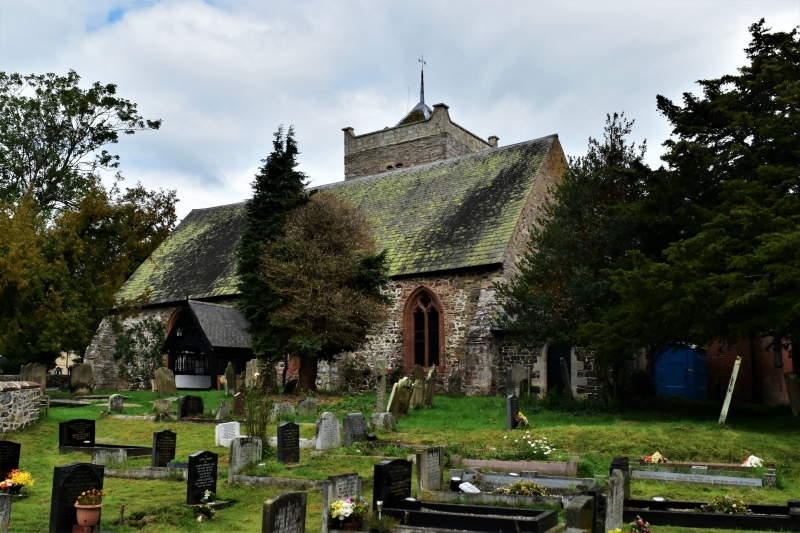 Long nave with roughly hewn sandstone quoins to north east and north west angles has C19 windows with geometrical tracery to left and right of tower with C17 buttress to far left; west window of four lights with simple panel tracery is also C19 (as is cinquefoiled cusped roundel above) but is said to be a copy of a Perpendicular window. South side has four large C17 buttresses and two C19 windows with cusped geometrical tracery to left and right; window with reticulated tracery immediately to left of third buttress from west also apparently C19: late C17 gabled timber porch has roughly turned balusters to sides and collar and tie beam roof, C19 fretted bargeboards and finial; C13 pointed south doorway has continuous moulding and hoodmould.

Chancel: has two round-headed windows with gauged heads on north and one on south and east; dentilled eaves cornice and coped verges to east gable: black stone gabled vestry added to south 1846.

INTERIOR: magnificent C14 nave roof of upper cruck construction in seven bays has arch-braced collars with cusped V-struts and four tiers of purlins (upper three moulded), restored when C18 plaster ceil removed in 1924. The other principal feature is seating to nave and chancel; Jacobean box pews with variety of patterns (mainly round-headed arches) with pendant knobs and cock's head hinges, cut down and rearranged 1846, to both sides of nave and to centre at rear; that to front on north (squire's pew) with Kynnaston family coat-of-arms; open wooden benches also with pendant knobs (generally squatter than those to pews) in centre to front of nave probably C16 but it has been suggested they are medieval and were remodelled in C17; further Jacobean woodwork incorporated in choir stalls. C13 pointed north doorway (leading to tower) has panelled door made up from dismantled pews c.1931; plain octagonal font heavily scraped and with C19 circular base is probably C14 or C15. Pointed chancel arch probably C14, reconstructed 1761 when present chancel built. This retains C18 texts on wooden boards, pedimented to east wall and with moulded entablatures on north and south; plaster ceil with moulded cornice 1785-86 and Jacobean communion table.

Although not recorded in Domesday, the church at Worthen is of pre-Conquest origin and the large size of the parish suggests that it may have been a minster.