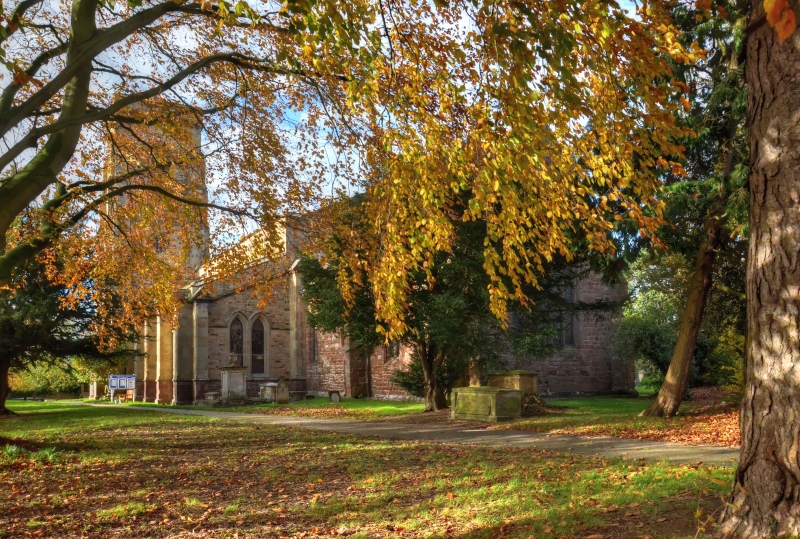 Aisles: five bays with four pairs of lancets similar to those in clerestory but linked by a continuous hoodmould, gabled buttresses; gabled ashlar porch in west bay on south.

Chancel: three bays on chamfered plinth with stepped buttresses between second and third bays from west; windows on north and south with plain Y-tracery and hoodmoulds (the central one on south at a higher level above the pointed priest's door); east window in a style of c.1300, intersecting tracery of five lights pierced by an elongated quatrefoil above, below the apex a small lancet opening; also in the east wall two stones with C12 chevron moulding presumably re-used from earlier church on site.

Interior: south doorway has wide pointed double doors with six carved quatrefoils (c.1830) on outside and original lock; tall broad arch at west end not to tower but to organ gallery; plain square panelled roof to nave in five bays with principals resting on stone corbels (c.1904), chancel roof of trussed rafter construction with scissor bracing and quatrefoil carving to cornice c.1300 (restored 1904); the chancel arch has been re-built (c.1830) but its broad tall, pointed form with bold quadrant mouldings is probably a copy of the original late C13 arch; C13 trefoil-arched piscina and in north wall an aumbry with shouldered arch and an oak door inscribed HP/WR/HH/1652. Five bay nave arcades have wide pointed arches supported by piers of quatrefoil section with fillets on tall octagonal bases much re-cut, the exceptions being the eastern responds and the first capitals from the east (red sandstone) which may be C14.

Fittings and furnishings: C12 plain round font has deep scalloping beneath the bowl and a moulded rim and base; wooden pulpit is of 1904; marble and mosaic reredos by G.E Street (c.1866); C17 oak panelling in chancel placed there c.1917 and further Jacobean panelling used in the screen below the organ gallery; six glazed medieval floor tiles set in a wooden frame on the south chancel wall; wooden screen across the chancel with its openwork tracery also in the style of G.E Street dates from 1904 as does the stained glass in east window, commemorating the reconstruction of the chancel at this time; there are two parish chests, one of early C17 at east end of south aisle and another at west end inscribed I B R P WAR 1700; an iron-bound chest with small painted panels (probably done in C19) dates from early C17 but is of continental origin.

A Saxon minster church, the parish of Pontesbury was formerly divided in three portions, an arrangement dating back until at least C13 and which persisted until 1909. The church stands in a roughly oval-shaped enclosure, a feature of early foundations.