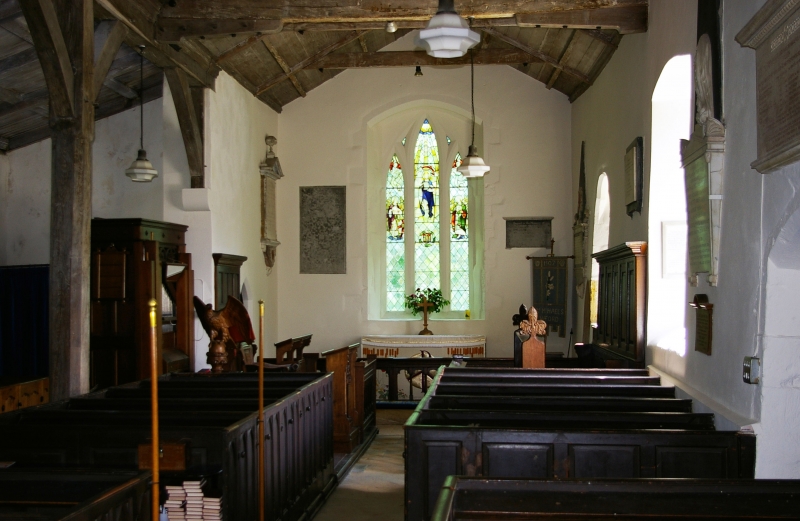 Anglican parish church. C13 origins, with remodelling in C18, Cl9; and early C20, for Ingham Baker then Lord of the
manor. Local stone roughcast; with Ham stone ashlar dressings; Welsh stile roofs between stepped coped gables, with
plain parapat having moulded coping on north side: west bell turret in timber clad with cedar shingles against the
stone west termination. Three-cell plan of single bay chancel, 3-bay nave and north aisle; with north-east corner
vestry and south porch. Chancel has plinth and very slim corner pilasters; east window a 3-light 'Y'-tracery window
with pointed-arched label, of C18; south wall has one small lancet. Vestry has single lancet window in the east wall.
possibly a reuse. North aisle has 3 single lancets and a segmental-arched doorway in the north wall and one lancet in
the west wall. Nave has a single lancet towards the west end of the south wall, with a 2-light chamfer-mullioned window
in chamfered recess; flat-arched without label, to east of porch, a matching 2-light window set high under eaves
towards west end, probably for a gallery, now blocked; west gable has a pair of lancet windows, South Porch added in
C18: plain coped south gable with stone tiled roof and gabletted finial, with chamfered triangular arched outer
doorway; bench seats; moulded segmental-pointed arched inner doorway. Interior of very individual character, Chancel
and nave have C18 boarded roofs with double-collar trusses; chancel plain with no arch into nave; in south wall a C14
partly-restored double piscina, and the lancet nearby has a trefoil rere- arch, as does the lancet in the south wall of
the nave. The nave is separated from the north aisle by a timber arcade of square-section posts with slightly- arched
braces to wall-plate beam; the aisle ceiling boarded to match, being of lean-to form. Fittings include some fragments
of C17 and C18 timber panelling in the chancel, a C18 altar table, and nave box pews of early C19 pattern; small
hexagonal pulpit in the north aisle probably C18; plain octagonal font of uncertain date, but possibly C14; boards with
the Creed and Lord's Prayer, dated 1795, and a GIIIR hatchment on the north wall. Monuments include marble decorated
wall tablets to Azariah Pinney, died 1760, and John Frederick Pinney died 1762, both former owners of trio manor house,
in the chancel; and to Elizabeth Pinney, died 1812, on the south wall of the nave. Two bells in turret, both of C18.
The chancel apparently collapsed in 1846, and part of the east wall and the vestry damaged by fire in 1895; major
restoration of 1902. First mention of church in 1266. (VCH Somerset, Vol IV, 1978, p73-75; Pevsner, N Buildings of
England, South and West Somerset, l958).