A Grade I Listed Building in Ewelme, Oxfordshire 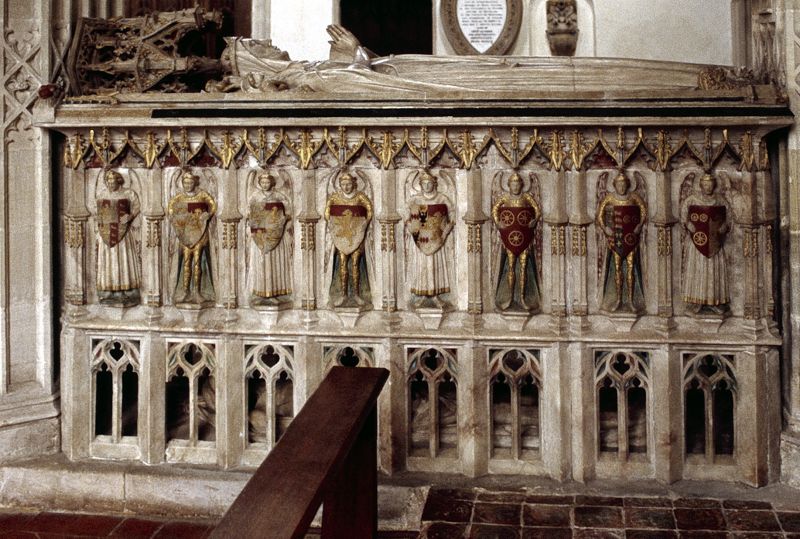 Interior: moulded two-centre arched arcades to aisles with piers of clustered columns, and carved angels bearing shields to spandrels, except to south of nave, which has blank shields to the spandrels. C15 ribbed roof, with feather-bodied angels with out-spread wings to intersection of beams to chapel roof.

Octagonal bowl font with quatrefoil carving with shields to each side, on a base panelled with blind ogee arches. The spectacular wood cover, presented by John, Duke of Suffolk, after the death of his mother in 1475, is of four tiers of cusped and crocketted arches with figure of St. Michael at apex; counterpoise is a carved Tudor rose.

Chest tomb to Thomas Chaucer (d.1434), and his wife, Matilda Burghersh (d.1436) with fine brasses to top and painted coats of arms to sides, in chapel. Alabaster chest tomb to Alice, Duchess of Suffolk (d.1475), between chapel and chancel with decorated arched canopy; effigy wearing coronet, robes and Order of the Barter; angels under canopies to sides; beneath in traceried base, stone cadaver. C15 wood screens, shortened in 1844, restored in 1925. Reredos and altar to chapel by Sir Ninian Comper, 1902.

History: Earlier church, dedicated to All Saints was rebuilt c.1432 at the expense of the Earl and Countess of Suffolk. The countess (nee Alice Chaucer) was born in Ewelme in 1409, the daughter of Thomas Chaucer, the lord of the manor, and grand-daughter of Geoffrey, the poet. She married William de la Pole, Earl of Suffolk in 1430 (created Duke of Suffolk 1448). He "for love of his wife and the commodity of her lands felt much to dwell in Oxfordshire". They rebuilt the church, established the adjoining almshouse and built the school. The use of brick, in the church parapet and the other buildings, is one of the earliest in the county.