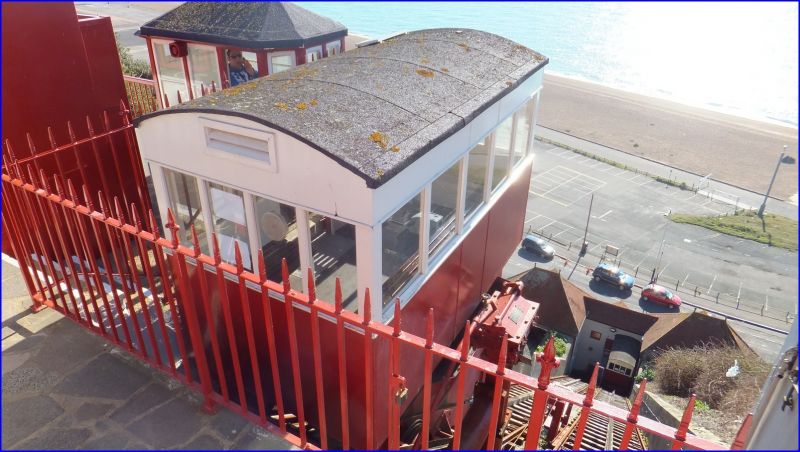 A cliff lift comprising waiting rooms, pump room, track, cars, brake houses, boundary railings and lift machinery. The cliff lift was constructed in 1885 for the Folkestone Lift Company by Messrs Waygood and Co. The waiting rooms were designed in a Domestic Revival style by the architect Reginald Pope and the builder was John Newman. The pump room was added in 1890 in similar style, at the same time as a second lift, which was removed in 1985.

A cliff lift comprising waiting rooms, pump room, track, cars, brake houses, boundary railings and lift machinery. The cliff lift was constructed in 1885 for the Folkestone Lift Company by Messrs Waygood and Co. The waiting rooms were designed in a Domestic Revival style by the architect Reginald Pope and the builder was John Newman. The pump room was added in 1890 in similar style, at the same time as a second lift, which was removed in 1985.

PLAN: two conjoined waiting rooms with a linking corridor at the lower level with an attached pump house on the east side. On the north side the waiting rooms are linked to two steeply inclined iron tracks 164 feet in length, each with a car and a brake house at the top.

WAITING ROOMS
EXTERIOR: the 1885 waiting rooms on Lower Sandgate Road are single-storey brick pavilions with concrete plinths, hipped tiled roofs to the centre and splayed bays to the ends surmounted by terra cotta ridge tiles and finials. They are linked by a lower single-storey central entrance block with a gabled verandah supported on six wooden piers. The arched entrance has two 3-panelled, rail mounted sliding doors and is flanked by two narrow casement windows. The waiting rooms each have a tall casement window adjoining the entrance and a tall canted bay under a projecting gable with wooden barge-boards. The side elevations each had a casement window. When the second lift was added in 1890 the main entrance was moved from the central lobby (which became the exit) to a new double door which replaced one of the windows in the eastern waiting room. A flight of steps was built up to this door and the turnstile access was removed at this time. The rear elevations of the waiting rooms project forward of the entrance block and access to the cars is on the inner side.

INTERIOR: the waiting rooms and corridor retain their original joinery including dado panelling with fielded panels, doors with moulded architraves and fielded panels and wooden railings to regulate access to the cars.

PUMP ROOM
EXTERIOR: a single-storey brick pump room with a concrete plinth and tiled roof, hipped to the west and splayed to the east with terra cotta ridge tiles and finials. The principal front has a projecting gable to the west with a three tier six-light square bay, a blank circular window, a four-tier four-light splayed bay and a single-light window in the side bay window.

THE LOWER STATION TANKS
The original tank was built under the Lower Sandgate Road and consisted of a brick-lined round reservoir. A second tank was built alongside in 1899.

TRACK
Cast iron track, originally laid on sleepers that spanned wooden longitudinal beams running vertically up the length of the track bed which were coated in tar. However as a result of the harsh coastal weather these were replaced by concrete within a couple of years. In the middle of the tracks are the emergency braking systems.

CARS
EXTERIOR: 1885 cars built to a modified goods-wagon design, fitted above a purpose-built undercarriage containing the water tanks. These run on a standard Victorian design of wagon wheels of approximately 28" diameter consisting of wrought iron spokes and cast iron rims. The undersides have undercarriages with a water tank and draining spout and a cistern valve between the two tracks fills the cars with water. The passenger cars have segmental-headed roofs, four windows to the ends and five windows to the sides. The half-glazed doors are on the centre of the outer sides and the Leas Lift is the only one from this era to be built with side door access to the cars.

WHEEL HOUSES
EXTERIOR: the upper station was originally provided with open air platforms and a driver station but the Board of Trade insisted that driver stations should be covered and two wheel houses were built, one for each platform. The wheelhouses are rectangular concrete buildings approached down flights of steps with continuous casement windows and hipped roofs. A third wheel house was built for the 1890 second lift.

INTERIOR: the wheelhouses retain the original driving controls. This was the only cliff lift ever built with dual controls. Although they were disconnected after a couple of years they are still in situ. The lift mechanism was originally provided with a separate brake wheel fitted lower down on the shaft of the balance wheel but this was replaced by a combined balance/brake wheel in 1887. Most of the controls were provided by standard railway components, for example the brake wheel was a level crossing gate wheel and the water lever was a signal box lever.

UPPER STATION TANK ROOM
This was built under the Leas in 1890 and fitted with two cast iron tanks linked to form a single reservoir of the same design used on railway water towers. A second tank to a different design was built alongside in 1899.

UPPER STATION TUNNEL
This is built under The Leas and extends the whole length of the upper station as defined by the cast iron railings (40ft). It is accessed down a flight of stairs down from the wheelhouse and gives access to the upper station tank room. It houses the brake wheel mechanism and control rods, the original dual controls and water pipes.

RAILINGS TO THE LEAS
The 40ft frontage to The Leas has cast iron spear railings with dog rail and urn principals and a gas lamp standard.

The Leas funicular cliff railway was built to carry passengers between The Leas situated on the cliff top and the lower promenade and was opened to the public on the 21st September 1885 by the Folkestone Lift Company on land leased from Lord Radnor. The lift equipment was supplied by Waygood and Co of Southwark and the waiting rooms were designed by a Folkestone architect Reginald Pope, the builder John Newman.

Two carriages mounted on triangular-framed trucks ran on twin tracks, coupled together by steel wire rope passing around a large pulley wheel at the upper terminal. In order to operate the lift water is admitted to the ballast tanks of the upper carriage; this overcomes the weight of the lower one which is drawn up as the upper carriage descends. It was the third water-balance lift to be built in the country and it is now the second oldest still in service.

Originally the lift operated as follows: once the lower car was loaded the toll collector contacted the brakesman who also had the job of supervising the loading of the upper car. The weight of the loaded car approximated five tons and to set them in motion the brake was released and the cistern valves opened allowing whatever water was necessary into the tank of the upper car until its ballast outweighed that of the lower car and its passengers. On arrival at the bottom, the toll collector released the water into a drain running onto the beach.

The lift proved so popular that a second lift was added alongside the original one in 1890, of slightly different design but operated in the same way, and at the same time an automated water pumping system was also brought in because the former method of discharging the water at the bottom after each journey was giving the water company concern. The first year of operation of the water recycling system ran into problems when the pipes taking the water back up the cliffs froze during the harsh winter of 1890-1. As a result an additional wing was built on the pump room to enclose these pipes and provide a coke stove to keep them defrosted.

The lower station building was used as a Home Guard Post during the Second World War. The original gas engines were removed at this time to deny the enemy an operating lift up the cliffs. After the war new electric motors were given to drive the pump from the War Damage Reparation Fund.

The Leas Lift, Folkestone, a cliff funicular railway built in 1885, operated by the water balance system, is listed at Grade II* for the following principal reasons:
* Rarity: of only eight water balance cliff lifts built nationally, this was the third, but is one of only three which are still operating by the original system;
* Engineering and structural interest: in its unique arrangement with two wheel houses with dual controls, with originally two separate lifts beside each other, with cars with side entrances;
* Rarity and degree of survival of the working machinery: being the only water balance lift with the original 1890 reciprocating pumps, with early cast steel herringbone gears in use, and its original balance wheel and brake assembly; it is the only funicular railway in the world with a working band brake and has a unique automatic, hydraulic, remote engine control system;
* Architectural interest: in the Vernacular Revival waiting rooms and pump house by Reginald Pope.