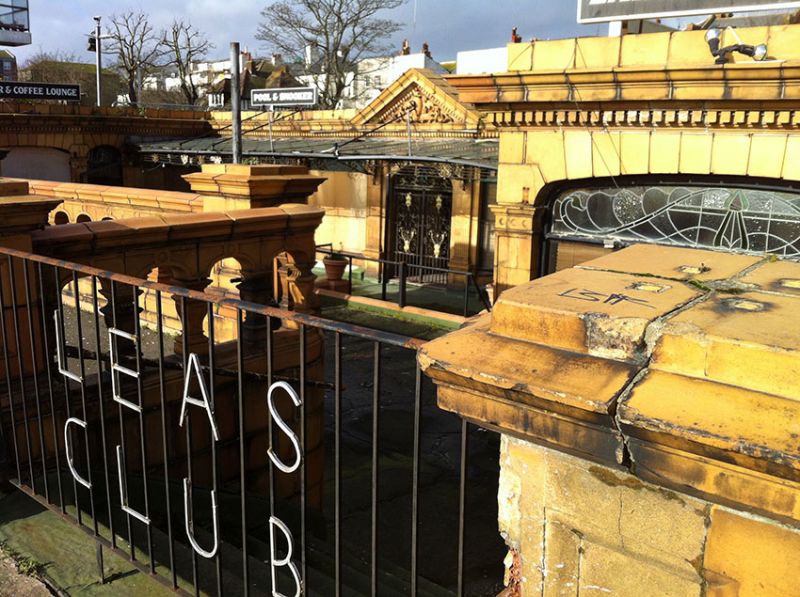 PLAN: One storey and basement with seven bay front, roughly rectangular with projecting end wings to the south and attached walls enclosing a forecourt. The interior comprises small tearooms to the south with billiard room underneath and large two-storey high main tearoom to the north.

EXTERIOR: Because of lease restrictions only one floor is visible behind a sunken forecourt. The frontage is by far the most architectural and the elevation of the most special interest. The south entrance front is symmetrical with an elaborate dentil cornice throughout and a central enriched pediment with dolphin motifs. Below is an arched doorcase with keystone and pilasters and an elaborate wrought iron overthrow and pair of gates. The door behind has original Art Nouveau style stained glass with floral motif. On each side of the main entrance are two bays with segmental arched windows and central narrow doors, all divided by pilasters. All windows and doors retain Art Nouveau style stained glass with floral motifs to the upper parts. The whole of the front has an attached iron and glazed verandah supported on large scrolled brackets and thin supports. The modern canopy entrance at street level is not of special interest.

The projecting wings have two similar segmental arched windows with two doors and the south facing ends have one segmental arched window. All windows and doors to the projecting wings retain their Art Nouveau style stained glass. Attached to the sides of the building are the terracotta forecourt walls, comprising elaborate balustrading on retaining walls with steps into the forecourt at the centre and sides which are flanked by pairs of panelled piers. These originally held lamps. The east side has nine window openings (one blocked) with terracotta lintels and mid-C20 metal-framed casements. The north side has one blocked opening with a terracotta lintel. The west side is similar but at the time of inspection most of it was concealed behind a fence. From the interior it was clear that all windows on this side had been replaced in the 1930s or 1950s with metal framed casements.

INTERIOR: The central entrance leads into a vestibule with dentil cornice and, on either side, a doorcase with eared architrave with ovolo and bead and reel motifs and swag frieze to the overmantel. On each side this leads into small tearooms. The central doorcase opens into the main tearoom which rises the full height of the building (ground floor and basement). The centre has a coved ceiling with patterns of diamonds and octagons, flanked by large coffered sections. The space is entered by an imperial staircase with turned balusters on the south side under a central segmental arch. The adjoining round-headed arches have a section of curved balcony beneath. The east and west sides have a gallery supported on Tuscan columns with Tuscan columns to the arches above the gallery. The upper level originally had six round-headed arches to each side but two were removed on each side and incorporated into larger arches to provide better sightlines for the building's later use as a theatre. The north side originally had a continuation of the gallery with one large central cambered arch flanked by smaller round-headed arches on each floor with balustrading to the gallery, which was originally used by a small orchestra and vocalist. In 1928 the north gallery was replaced by a proscenium arch. This has a central rosette decoration and six triangular motifs. The lower level south side has a separate room, formerly a billiard room. This has a later suspended ceiling, but above this some original plasterwork is likely to survive. This room has later panelling.

HISTORY: The Leas Club was opened in 1902 as a teahouse called The Leas Pavilion. It was designed by a local architect, Mr Reginald Pope for a Mr Frederick Ralph.

The site lay between two hotels on the east side of The Leas which had long leases from the Radnor Estate with an "ancient lights" clause so that no building could be constructed which would prevent light reaching their windows. As a result the building was constructed with only one storey visible above the ground, with a flat roof but a full-height basement.

The contractor for the work was Castle and Co and the overall cost was £10,000. The building was opened by Lord Radnor on 1st July 1902.

The teahouse was fully licensed and had high prices. A covenant in the lease required that the lessees would "use the room for the highest class tea and refreshment trade with the view to securing the best class of visitors only". At the far end of the gallery was seated a ladies orchestra, often joined by a vocalist. In 1906 a concert party was introduced on a makeshift stage below the gallery. During the First World War farewell concerts were held for the troops before they embarked onto the ships to France. The concert parties continued after the war until in 1928 a proper stage was built at the far end of the hall with plays and tea matinees. this flourished as a repertory theatre called the Leas Pavilion Theatre for 57 years until September 1985. It reopened as the Leas Club in March 1986 and has subsequently been run as a cafe and pub and venue for live music.

REASONS FOR DESIGNATION: The Leas Club is designated for the following principal reasons:

* As a rare example of a purpose-built Edwardian high class tearoom and its poignant evocation of troops departing for France in World War I and early-C20 popular entertainment;
* The entrance front is of special architectural merit for its high quality moulded terracotta work, ironwork grilles and attached verandah and for its Art Nouveau style stained glass;
* The plan form survives intact;
* The interior with its imperial staircase, galleried interior and ceiling survives substantially intact apart from a few alterations to convert it into a theatre in 1928;
* As an important Edwardian seaside building, comparing in interest with the later Leas Cliff Hall and Pulhamite caves at Folkestone, which are both listed Grade II.