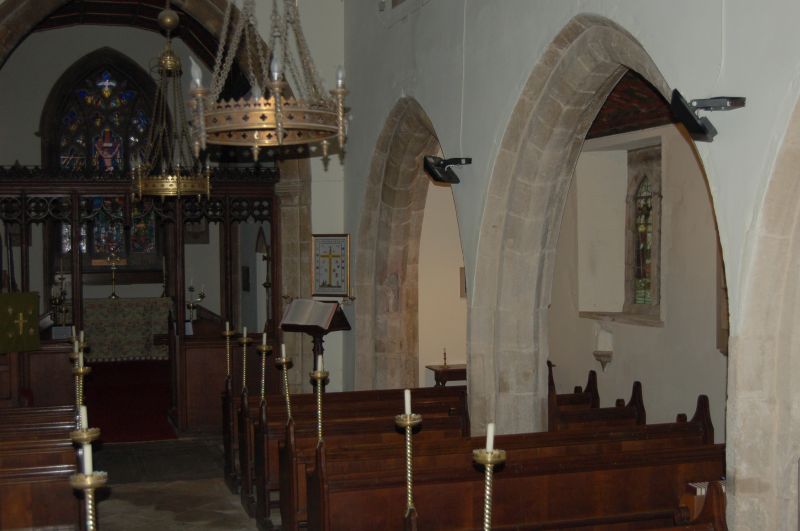 Parish church. C14, C16, restored 1874-6 by G F Bodley. Coursed limestone rubble
with ashlar dressings. Graded Swithland slate roofs. West tower with broach
spire, nave, south aisle, south porch, chancel. Double moulded plinth. 3 stage
tower with chamfered stringcourses. West elevation: pointed arch 2-light
window with cusped lights, hoodmould and head stops. Above, in 3rd stage a
similar louvred bell-opening with no hoodmould. Above in the spire, a 2-light
lucarne and above again a single light lucarne, both with crocketed gables.
North, south and east elevations the same, but without the lower window. Spire
topped with a cross finial, crocketed finial with empty niche on east gable of
nave. Clerestory only on south side with two C19 circular windows. North aisle
has a C16 doorway with 4-centred arch with chamfered jambs and 12-panel door. To
right, a 2-light pointed arch window, and to left a 3-light pointed arch window,
both with hoodmoulds and both C16 or later. To left again, an angle buttress with
set-offs. South aisle has, to left of porch, a 2-light window with flat head and
hoodmould, and beyond, a buttress with set-offs. To right of porch, a similar
window with a buttress beyond. C19 gabled south porch with coping, cross finial
and 2 buttresses with set-offs. Pointed arch doorway with double roll-moulded
jambs and hoodmould. South doorway is similar, with plank door. Chancel
completely rebuilt in C19. Coped gable with finial. Cill course. North wall has
a central buttress with set-offs and to right an ogee arch 2-light window with
flowing tracery and hoodmould. South wall has a central buttress with set-offs.
To left a priest's doorway with pointed arch and hoodmould and plank door. To
left again, a 2-light ogee arch window similar to that on the north wall. To
right, a 2-light pointed arch window similar to that on the north wall. Diagonal
buttresses at north-east and south-east corners. 3-light pointed arch east window
with flowing tracery and hoodmould. Interior: 3-bay arcade on south side of nave
with double-chamfered pointed arches and plain piers. Tower arch and chancel arch
are both double-chamfered with polygonal engaged columns with capitals and bases,
the tower arch with a hoodmould and headstops. Crudely shaped niche on eastern
respond. South aisle has C14 ogee arch piscina in south wall. Chancel has
blocked pointed arch doorway occupied by C19 organ. Flanking the east window are
single ogee arch niches with cusped heads and hoodmoulds, each occupied by the
figure of an angel on a pedestal. Sedilia below south-east window. Roofs all
C19. Screen reputedly by Bodley. Pews, choir stalls, pulpit, all C19. C19 bowl
and stem font with ogee-shaped wooden cover. Monuments: On north wall of nave
three C20 plaques to Murray-Smith family. Above north door the royal coat of arms
in square moulded frame. On west wall of south aisle a C18 oval marble cartouche
with flaming urn at top and ornate border of palm leaves and winged cherubs heads
with tassels. Inscribed to memory of John Horton (d 1701) and his wife Barbara (d
1705). Above arcade on south side, a C18 black and white marble cartouche with
winged cherubs heads supporting a shield at the top, and bunched drapes at the
base, inscribed to the memory of Andrew Horton Gent and Elizabeth his wife (both d
1721). To left of this, an oval slate tablet with white marble shield inscribed
to memory of Richard Wynne, Rector (d 1788). On the south wall a C20 marble and
mosaic plaque to one of the Murray-Smith family, and on the west wall a small
brass WWI memorial plaque. Chancel has a C20 memorial plaque on its south wall
and a late C19 plaque beneath its north-east window. Late C19 stained glass in
west window, south aisle and chancel windows. Early C20 in north windows of
nave.
VCH, V, 120.