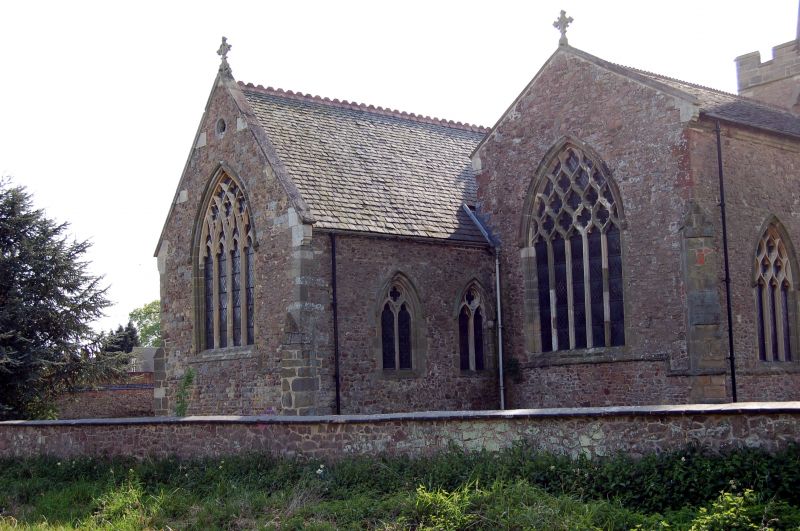 GV
II*
Parish Church. Largely early C14 though the chancel is earlier, and the spire
is Perpendicular. The Church was restored in 1882 by W. Bassett-Smith of
London. Random granite rubble with limestone dressings and Swithland slate
roofs. West tower and spire, nave and large north aisle, chancel. Tower is a
massively squat structure, with angle buttresses and two stages with embattled
parapet with corbel-table and recessed later spire with small lucarnes. The
paired casped bell chamber lights are set beneath a pointed arch with hollow
chamfered shouldered jambs. Big west window of 3-lights of finely reticulated
tracery. Buttressed south wall with low pitched C19 gabled porch and the
recut tracery in a linear Perpendicular style. Paired clerestory lights are
set in hollow chamfered arched recesses. Fabric of chancel seems largely of
earlier and probably C13 date: most of it is of cobble construction, though
the upper courses are granite. Externally all features are of a later date
however: there is a Perpendicular south window and a tiny priests door with
hollow chamfered jambs. Added vestry to south. String course across east
wall rises below the east window which is of 4-lights, a Victorian renewal in
a late Decorated style. The north aisle is wide, with its own pitched roof
and clerestory, similarly detailed to the nave. Its windows vary from
reticulated to linear forms but appear to be renewed. Its east window however
is a particularly flowing example of reticulation. Buttresses and string
course. Inside, the north aisle is similar in size to the nave, giving the
Church almost a double-naved appearance. The west tower arch is largely
obscured by the organ but is single chamfered. The nave arcade of 4 bays has
arches with sunk quadrant mouldings. The west respond is of clustered shafts,
but the other piers are octagonal with flat panelled capitals, 2 of which are
ornamented with simple quatrefoils and floral emblems in very low relief.
Nave roof with tie beam is Victorian, but some of the corbel heads seem to be
original. Chancel arch has quadrant mouldings but its responds are
Victorian. The chancel screen with cross dates from the restoration of the
Church. Piscina apparently a survival of the C13 building, a simple foiled
recess. Archway to north chancel chapel has clustered shafts as responds and
is of shallow pitch, the arch almost straight sided. Stained glass: some
fragments of C14 glass survive in north and south windows and the east aisle
window. Some of the fragments are merely floral or heraldic emblems, but
there are also two pairs of angels, vigorously swinging censers. In the
chancel north window is glass of 1866, richly coloured medieval style
narrative. Late C19 wood reredos, in an Arts and Crafts idiom. Painted blue
green red and gold it has two central figures of kneeling angels in low relief
and a frieze of vine motifs etc., the lines of the foliage highly stylized.
Victorian front seems to have used the aisle capitals as its inspiration: it
is also octagonal with simple raised floral emblems. C12 pillar piscina in
south aisle has chevron stem with cable moulding beneath scalloped squared
basin.