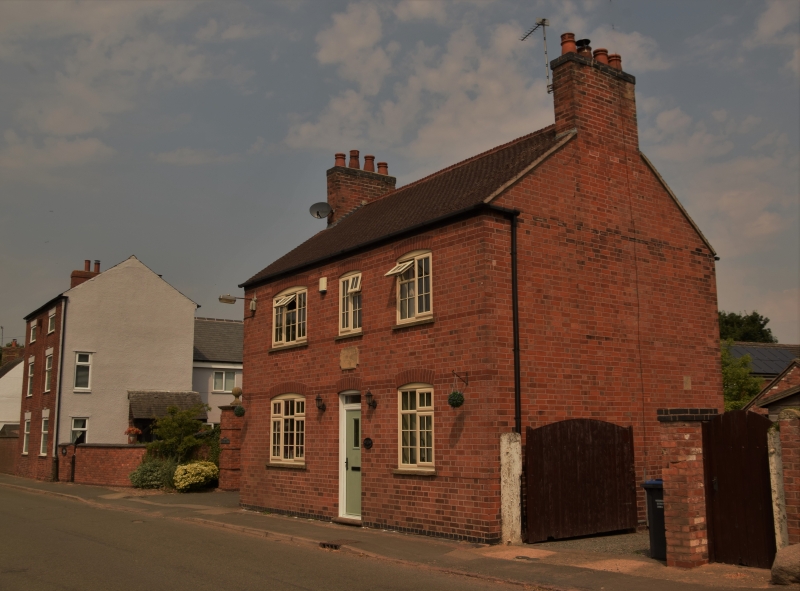 GV II
House. Largely C18, but incorporating early fragments and some Edwardian
alterations. Painted brick with welsh slate roof, but apparently, remnents of
a timber framed structure survive within the thickness of the walls. Gable
faces the street, but is unusually wide in span and is the main facade of
three bays with doorway to the left in a wide moulded wood doorcase with
medallions and beading in the architrave, and a shallow arch above the radial
fan light. The door itself is an Edwardian replacement, and so are the two
squared bay windows to its right which are contained under a single lean-to
roof. Three upper windows are renewed casements in original openings with
stuccoed flat arched heads with keystones. Single window in gable apex.
Lower wing to left of two storeys and three bays with central round headed
doorway and flanking 12-light sash windows with flat arched brick heads. Rear
elevation of main block has three windows with stuccoed heads with keystones
on each floor, on the ground floor, two retain their original 16-light sashes
with crown glass while one upper window is a 12-light sash. Single window in
gable apex. Door in lean-to addition beyond. Side wall has brick sill band
and one evident blocked ground floor window with signs of other disturbance
above. Gable end stacks. Inside, the cellar incorporates a fine C15 or early
C16 fire place with tudor brickwork behind a four-centred archway with stone
voussoirs.