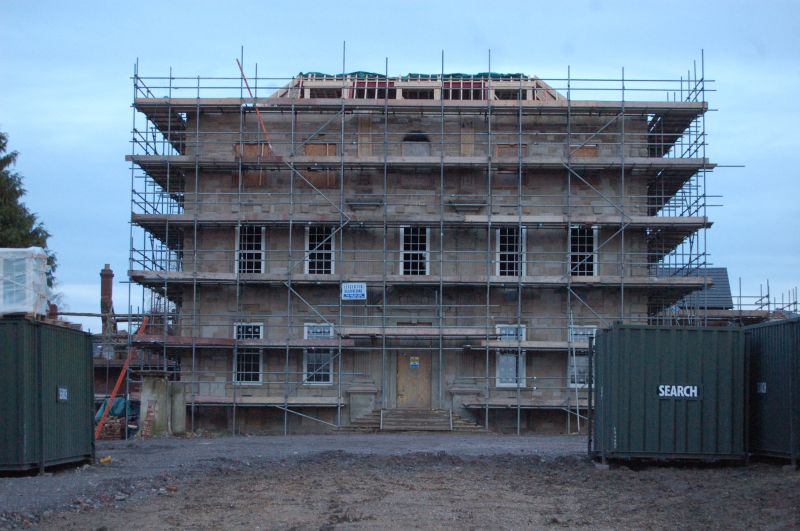 Country house dating to 1723 but with an early C17 core, converted into apartments in the early C21.

Country house dating to 1723 but with an early C17 core, converted into apartments in the early C21.

MATERIALS: the principal west frontage is of ashlared stone whilst the other elevations are rendered. The dressings are of stone except for those on the north elevation which are concrete. The roofs are covered in Welsh slate.

PLAN: the hall is square on plan and has two rooms each side of a central hall. It has a late C19 rectangular extension attached to the south-east corner. The bay window and the range on the north end of the east side are shown on the current Ordnance Survey (OS) map but no longer exist.

EXTERIOR: the hall is three storied with a basement and early-C21 attic floor in the shallow hipped roof. The symmetrical five-bay west façade has rusticated quoins and a moulded parapet that curves up at the ends and in the middle. The fenestration consists of early C21 nine-over-nine pane sashes to the lower two floors and six-over-six pane sashes to the second floor. The central second-floor window has a rounded arch surround. The windows retain their original bolection moulded surrounds which have keystones and large aprons. The basement windows are blocked up. A splayed flight of stone steps leads up to the entrance which has an early C21 eight-panelled door and original delicate fanlight. The lugged door surround has a broken segmental pediment with scrolls, supported on carved consoles and a keystone bearing the initials ‘LW’, presumably for Laetitia Wigley. The moulded jambs have been much repaired. The entrance is flanked by Corinthian giant fluted pilasters which end at the first floor, extending upwards to the parapet as narrow moulded pilaster strips.

The rendered south elevation is similar except it does not have a giant order or basement. The aprons may have been replaced. Attached to the front, right corner is the late-C19, single-storey music room which has a hipped roof behind a parapet. The fenestration and quoins are in a similar style to the original building. From the left, there is an elaborate door surround similar to those on the west and south elevations, followed by a canted bay window and then two windows. These are six-over-nine-pane sashes of early-C21 date, as are all the windows in the hall.

The north elevation has three bays with storey bands at first and second-floor level. These are of concrete, as are the quoins and window surrounds which are similar in style to those on the other elevations except for having cambered tops. The outer bays of the ground floor are lit by nine-over-nine-pane sashes whilst the central window is a narrow six-over-six pane sash. The first floor has a similar arrangement except the windows in the outer bays have twelve-over-twelve-pane sashes. On the second floor the outer bays are lit by six-over-six-pane sashes, whilst the central window has an arched surround.

The lower half of the subsidiary east elevation is obscured by the new detached house which has been built very close to it. The first and second floors have blocked windows with cambered arch surrounds in the outer bays, and there is a long round-arched window in the central bay lighting the stairwell.

INTERIOR: this retains very little of its original fixtures, fittings, joinery or plasterwork. The six-panelled doors, skirting boards, and cornices are all new; and the conversion into eight apartments has involved the introduction of modern kitchens and bathrooms. The new front door has salvaged C18 strap hinges and leads into the central hall which has a re-laid black and white chequerboard floor and C19 or C20 panelling. This is two thirds the height of the wall and consists of short lower and tall upper panels. It has two pilasters, the capitals of which form the springing point for an arch with carved spandrels that spans the hall. The dogleg stair with three balusters per tread is new but parts of the panelled dado have been retained.

The room to the right of the hall, occupying the south-west corner, has full height panelling with a short lower and tall upper panel. It has a dado rail and incorporated fireplace surround with a depressed Tudor arch. It is thought that the panelling dates to the C19 or C20 but about a quarter has been replaced during the recent restoration and it has been painted white. The Conservation Statement (2007) mentions that this room contains a late C16/ early C17 stone fireplace, now blocked, with a later surround. This is not visible and is presumably concealed behind the panelling. The room to the left of the hall, in the north-west corner, has similar panelling with incorporated fireplace surround, about three-quarters of which has been recently replaced. The music room retains a large Arts and Crafts style timber fireplace surround with an arcaded frieze and projecting mantelpiece.

Scraptoft Hall originated as an early C17 manor house. It was enlarged and completely remodelled by Lady Laetitia Wigley whose initials and the date 1723 were included on a rainwater head on the rear elevation (this has since been removed). In the Victoria County History (1964) it is stated that stone fireplaces with four-centred heads and a mullioned window belonging to the earlier house had recently been uncovered as well as traces of C18 wallpaper. The Buildings of England: Leicestershire and Rutland (1984) also mentions some C17 panelling, including one carved panel, on the second floor; a big chimneybreast and original four-centred fireplace between the two ground-floor rooms south of the hall; fielded panelling in the room north of the hall and bolection-moulded panelling in the rooms south of it; and some panelling on the first floor. This description was probably based on information from other sources rather than a site visit by the author however, and it is thought that most of the panelling had been replaced by the early C20.

James Wigley, the MP for Leicester, laid out the park which, at the end of the C18, covered about 100 acres and attracted visitors from Leicester. The garden included a lake, a pond, and a mound which concealed a small shell-lined grotto and was originally topped by a Chinese-style pavilion. The C18 outbuildings at one time included a bake-house, a laundry, and a small smithy, in addition to the stables. After 1765 the property was held by the Hartopp-Wigley family who lived in Little Dalby and let Scraptoft Hall to tenants. In 1787 it was leased as a furnished hunting-box to Eliab Harvey of Chigwell, Essex. Then in 1790 it was occupied by a retired London businessman named Wilson, and was afterwards the home of Thomas Paget of Ibstock. At the end of the C19 James Burns Hartopp inherited the estate through his wife and came to live at the hall. A servants’ wing was built on the rear (east) elevation in the mid-C19; and a single-storey music room was added to the south-east corner soon after 1896.
After the death of James Burns Hartopp, the hall was bought by Alfred Corah, of a Leicester hosiery firm, whose father had been the tenant in 1850. Corah died in 1924 and the house and grounds were later sold to B. W. Cole. The hall and adjoining land were then bought by Leicester Corporation in 1954 as the site for the new Leicester College of Education. Accommodation and lecture blocks were erected in the paddocks to the east of the hall in order to preserve most of the landscaped grounds; and in the hall the ground floor was used as offices, the first floor as lecture rooms and the second floor as residential accommodation. Alterations were made to the hall during this period, including the removal of the original hipped roof and chimneys and its replacement with a flat roof. The floor structures, boarding and ceilings were also replaced. It may also have been at this time that the stone surrounds, storey bands and quoins on the north elevation were replaced in concrete. In the late 1990s De Montfort University left Scraptoft Hall, and around the turn of the C21 the land to the south and east was developed for housing.

In 2007 the hall and stable block were purchased by a developer. The hall has been converted into eight apartments, involving the construction of a new roof within which a penthouse apartment has been built; the rebuilding of the roof structure over the music room; the re-rendering of the exterior; and the replacement of the early C18 oak staircase, as well as all the windows and almost all the doors. The servants’ wing has been demolished and a new detached house built more or less in its footprint. The stable block has also been converted for residential use, and the grounds to the north and east have been developed for further housing.

Scraptoft Hall, a country house dating to 1723 but with an early C17 core, is listed at Grade II for the following principal reasons:
* Architectural interest: it has a refined stone façade and secondary elevations which, viewed along the west forecourt through the ornate wrought-iron gates, presents an important and carefully designed Georgian composition;
* Group value: although the setting has been compromised by the modern landscaping of the forecourt and encroachment of the housing development, the Hall still has an important spatial and architectural relationship with the Grade II listed C18 wrought-iron gates, and it is nearby the Grade I listed All Saints Church.