War Memorial in the Churchyard of Church of St Wulfram 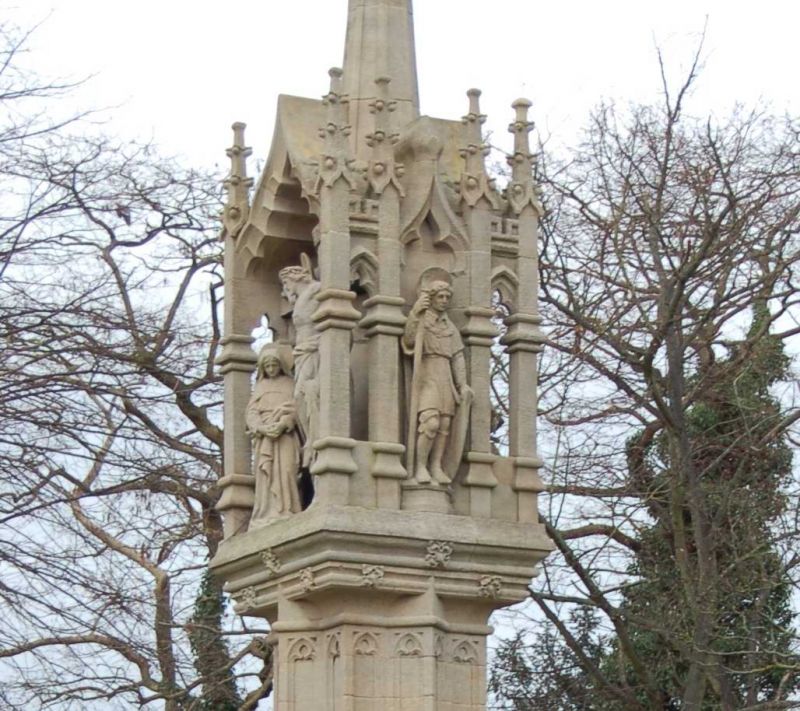 Entry Name: War Memorial in the Churchyard of Church of St Wulfram

First World War Memorial erected in 1920 to the designs of Sir Charles Nicholson.

PLAN: the memorial is located in the churchyard, north-west of the Church of St Wulfram. It is octagonal on plan and consists of four stages.

EXTERIOR: the memorial has an exuberant, highly detailed Gothic design. Upon the two-tiered octagonal base rests an octagonal plinth adorned with a blind Gothic arcade, each side with three trefoil-headed arches, except one side which contains a stone tablet inscribed with the following: IN GRATEFUL MEMORY OF THE GRANTHAM MEN WHO SACRIFICED THEIR LIVES IN THE GREAT WAR 1914 - 1919 WHOSE NAMES ARE INSCRIBED ON THE WALL WITHIN THE CHURCH. IN MEMORY ALSO OF THOSE WHO GAVE THEIR LIVES IN THE SECOND WORLD WAR 1939 – 1945. Above this, the broached column is an eight-pointed star on plan, forming 16 Gothic-panelled faces, surmounted by a square, moulded capital embellished with a four leaf flower motif. The highest stage has four richly canopied niches facing the four cardinal points with moulded and crocketed pinnacles at each corner and an octagonal, ribbed and crocketed pinnacle rising from the centre. The cusped niches form the shrine for the figure sculpture. On the west side is Christ on the Cross with the Virgin Mary and St John either side; on the north side is St Wulfram; on the east side is St Michael; and on the south side is St George.

SUBSIDIARY FEATURES: the memorial is set in paving stones which form an octagon.

This List entry has been amended to add the source for War Memorials Online. This source was not used in the compilation of this List entry but is added here as a guide for further reading, 23 January 2017.

The war memorial was built by Messrs Bowman & Sons with the sculptor Mr Phillips to the designs of Sir Charles Nicholson (1867-1949). The original plans, dated 1920, are deposited at the RIBA Drawings Collection. The memorial was unveiled by the local clergy and dignitaries in a ceremony on 27 November 1920. It is located in the churchyard of the Grade I listed Church of St Wulfram which contains the nine stone dedicatory tablets with the names of the fallen. St Wulfram’s is widely considered to be one of the most important parish churches in the country, due largely to its slender, crocketed C14 spire. The octagonal spire is set on a square tower, which in the C13 and C14 represented the most important development in the essentially vertical Early English style. The awkward join between the tower and spire was often broached, but at St Wulfram the broach is used in conjunction with corner pinnacles. These features clearly influenced Nicholson in his design for the war memorial. Nicholson was a leading ecclesiastical architect of the early C20 and has over 60 buildings on the List, many of them medieval or Victorian churches which he augmented or restored. He was articled to J. D. Sedding, one of the most prominent architects in the Victorian Gothic style, to whom he owed much of his interest and talent in church design. In 1893 he set up his own practice, winning in the same year the RIBA’s Tite prize, and he joined H. C. Corlette in partnership from 1895 to 1916. During the course of his career Nicholson designed many parish churches, using the English Gothic style with complete freedom, and was considered an authority on the design and furnishing of churches. He was consulting architect to seven cathedrals – Belfast, Lincoln, Lichfield, Llandaff, Portsmouth, Sheffield and Wells – and Diocesan Architect to Chelmsford, Portsmouth, Wakefield and Winchester. He also designed with Corlette the government buildings in Kingston, Jamaica, after the earthquake there in 1907, which probably constitutes the earliest extensive scheme of reinforced concrete buildings. In 1927 he took into partnership his chief assistant Thomas Johnston Rushton, whose son continued the practice.

The war memorial, erected in 1920 to the designs of Sir Charles Nicholson, is listed at Grade II* for the following principal reasons:

*Architectural interest: it is a richly detailed memorial that demonstrates a free and refined use of the Gothic idiom.

*Artistic quality: it is a finely crafted memorial embellished with figure sculpture in ornate canopied niches.

*Architect: Charles Nicholson is associated with over sixty buildings on the List and is recognised as an architect of national importance who displayed great skill and ingenuity in the Gothic style.

*Historic interest: it has special historic interest commemorating those members of the community who tragically died in the First and Second World Wars.

*Group value: the design was inspired by the elaborate detailing on the celebrated steeple of the adjacent Grade I listed church of St Wulfram, resulting in a close aesthetic relationship that enhances the memorial’s group value with the church.