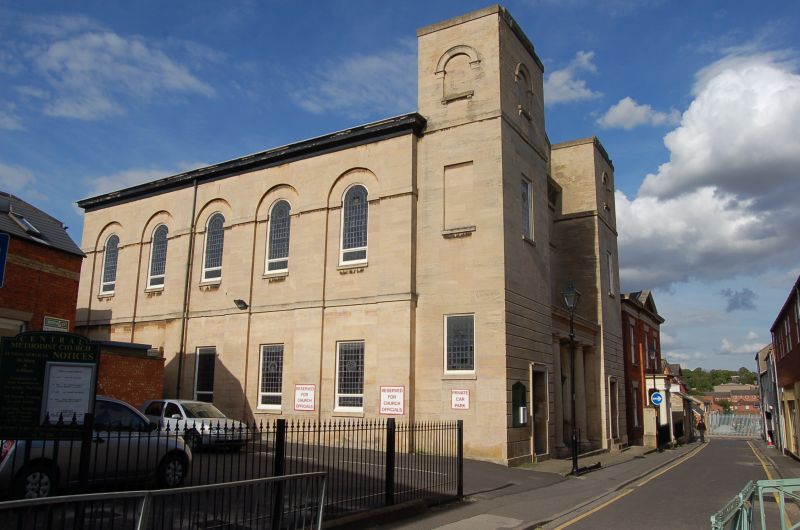 Wesleyan Methodist Chapel, built in 1840 and remodelled in 1924.

MATERIALS: the south front and west side are faced in fine ashlared limestone, the less visible east side is of rough ashlar laid to regular courses, and the rear is red brick. The apertures, which are mostly shallow, have stone dressings.

PLAN: the double-height building has a rectangular plan with a small projection on the rear west corner which contains ancillary rooms.

EXTERIOR: the chapel is a massive, Italianate building that dominates the narrow, built-up street. The regular façade is divided into three stages with pavilions at either end. The first stage of the pavilion has banded rustication and a recessed, two-leaf door set in a moulded architrave, reached by two steps. The second stage has a square-headed window with a narrow sill, and the third stage has a blind window set in a round-arched architrave with imposts and two corbels supporting the sill. On the outer returning wall of the projecting wings is a square-headed window on the first stage, and blind equivalents of the windows already described on the second and third stages. The triangular-gabled connecting block has a three-bay entrance in the Doric order (added in 1924) which has pilasters at either end, and columns flanking the moulded, round-arched doorway. The paired, two-leaf doors have two narrow, vertical panels and a square, glazed panel at the top. Above the dentilled cornice is a glazed tympanum. All the windows have square, leaded lights containing single, coloured, Art Nouveau-style symbols, including a pomegranate, rose, lily, passion flower, vine, wheat and fleur-de-lys. The second stage of the central block has three round-arched windows, linked by a continuous band at impost level. On the third stage, above the entablature, 'WESLEYAN CHAPEL' is carved in the gable head. The five-bay west elevation is in two stages, divided by a string course. The windows of both stages are set in round-arched, shallow recesses of double height, giving the impression of lesenes defining the bays. On the first stage, the windows are square-headed, and on the second stage they are round-headed, connected at impost level by a continuous band. The east side has the same arrangement of windows but they are set in a plain wall, unembellished by any recesses or banding.

INTERIOR: all the interior fittings, with the exception of the central section of the pulpit and the organ, date from 1924 when the chapel was extensively remodelled. The double-height hall is dominated by the massive organ chamber at the north end. As part of the remodelling, this was framed by a round arch with gilt-edged spandrels, supported by paired scagliola columns. Below the organ is the two-tier, mahogany-panelled pulpit which contains a niche for the stone font. The central section, which is the only remaining fragment of the original 1840 pulpit, is flanked by panelled side wings, added in 1924, behind which straight flights of steps lead to the pulpit. Behind the whole is a panelled screen which rises to gallery level. The gallery is accessed via stairs located either side of the front door. It is supported on slender columns and runs around all sides of the hall. The low, panelled front appears to belong to the original 1840 building, but the pine fitted benches, arranged in tiered groups, date to 1924. On the ground floor, the oak fitted benches (which replaced the box pews) are arranged in three groups. There are two memorial tablets, one to Richard Hornsby, 1864, and one to Thomas Dixon, 1867, which were installed on what was formerly the back of the hall. Since the alterations made in 1924, they are now in the narrow passage which runs transversely behind the pulpit. There is extensive ancillary accommodation at the rear of the chapel, including the vestry and the caretaker's lodging. The configuration of these rooms, which are plain, appears to be fairly intact, as does much of the joinery.

The Grantham Methodist Society was first recognised in 1788. Its members initially met in a room above a coppersmith's workshop in Back Lane, but by the turn of the century the increasing membership meant that new premises were needed. The first Methodist Chapel on Finkin Street was built in 1802 on the opposite side of the road to the present chapel. By the mid-1830s the members had outgrown these premises and they purchased a vacant plot on Finkin Street upon which to build a larger chapel. The plans and costings were based on those that had been drawn up for the recently erected chapel in Boston, designed by Stephen Lewin, and listed at Grade II*. (This was largely rebuilt after a fire in 1909). The building contract for the Grantham chapel was awarded to Messrs Greasley and Stretton who obtained the stone from Parker's quarry at Heydour. The foundation stone was laid in 1840 and the present chapel was formally opened in 1841. The caretaker's adjoining premises were situated to the rear and a separate Sunday School was built to the east side of the chapel. It had been stipulated that the design of the choir area should allow the installation of an organ at a later date without the need for structural alterations, and in 1857 the organ was duly installed. In 1874 the Sunday School was rebuilt on the same site by Frederick Brewin and has since been subject to alterations, notably the addition of a large single-storey extension on the north side in the 1960s. The Sunday School is detached from the chapel and is not of special architectural interest. The chapel was extensively renovated in 1924 by the architect Mr Lambert of Derby at a cost of £6,700. Almost the entire interior was stripped, including the box pews, gallery, floors, stairs and doors. The only part which was retained was the central section of the pulpit and the organ. New pitch pine seating was installed in the gallery, and stained oak seating replaced the box pews on the ground floor, which was re-laid on a concrete base. An arch supported by columns was constructed around the organ chamber, and side wings of panelled mahogany were erected either side of the pulpit. The original clear glass in the windows was replaced with leaded lights containing seven symbols. On the front of the chapel the three-bay entrance porch was added, a stone arch was inserted over the front door, and the windows in the flanking bays were converted into doors to provide direct access to the gallery. The main contractors for the whole scheme were Messrs Parks and Son; the decorating was carried out by J. Hopkinson; and the stone work was done by Messrs Streather and Winn. Some pews have since been removed from the front of the worship area. The chapel was attended by Margaret Thatcher (née Roberts) in her youth. Her father, Alderman Alfred Roberts, was a member at Finkin Street and a local preacher within the Grantham Circuit.

The Wesleyan Methodist Chapel, built in 1840 and remodelled in 1924, is listed at Grade II for the following principal reasons:

* it is a good example of a bold, architecturally sophisticated chapel built during a period of increasing confidence in non-conformist society;
* the chapel retains part of its original pulpit and organ, both impressive fittings displaying a high level of design and craftsmanship. The good quality replacement fixtures, dating to 1924, are sympathetic to the mid-C19 interior.