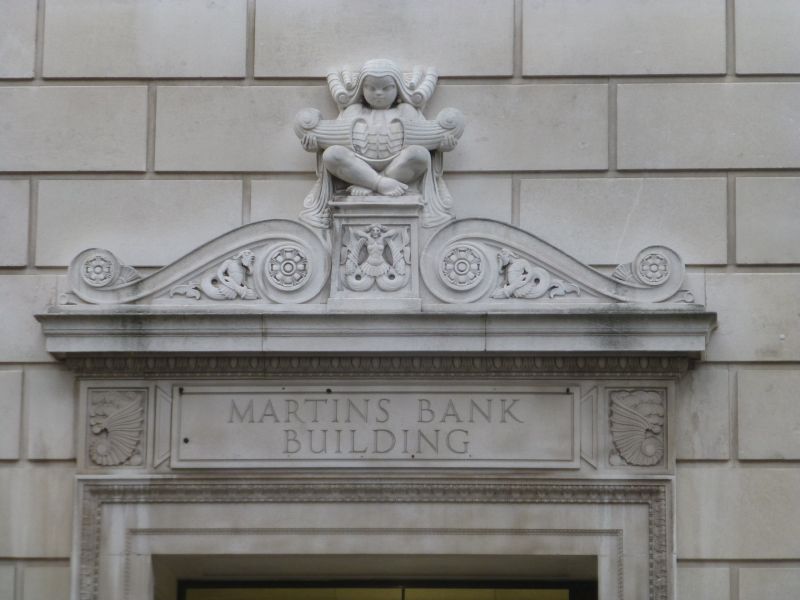 II*
Bank building, lying on the north side of Water Street. Built as headquarters for Martins Bank, 1927-32, by Herbert J. Rowse. Sculpture by Herbert Tyson Smith, assisted by Edmund Thomson and George Capstick. The building was latterly, and until recently, a branch of Barclay's Bank. It is currently (2007) undergoing renovation.

INTERIOR: Main doorway flanked by identical relief sculpture panels, the flat, linear style is influenced by the Paris Exhibition of 1925. These depict Liverpool as Neptune, accompanied by African children carrying bags of money, with anchor and weighing-scales. Above, grasshoppers, the sign of Martins Bank. The frieze of the entrance hall shows tribute bearers pouring coins into central receptacle. The entrance hall leads to large top-lit banking hall, with vaulted arcades on four sides, the columns hollow, threaded on to the frame. Travertine walls, floor, and columns. Circular corner lobbies. Curved counter in centre; light fittings, desks, and war memorial. The design of every detail was overseen by Rowse.

While the original Martins Bank is not known to have any direct links with the slave trade, banks were inextricably linked to the trade in eighteenth-century Liverpool, supplying the credit essential to a risky business which offered relatively long-term returns. The Heywood brothers, having been left a fortune by their father, established themselves as Africa merchants, engaging in at least 125 slaving voyages.

The relief sculptures at the entrance to 4 and 6 Water Street have provoked controversy in Liverpool since the late twentieth century. Some see them as dignifying, or accepting unquestioningly, the role of slavery in Liverpool's economy; whilst some see them as a more general celebration of the international aspect of Liverpool's trade and prosperity. Either way, the fact that the subject was chosen in 1927-32 is an indication of the extent to which Liverpool's former involvement with the slave trade has been embedded in its economic culture.

REASONS FOR DESIGNATION
4 and 6 Water Street is designated at Grade II* for the following principal reasons:
* Masterpiece of Herbert J. Rowse; one of the best interwar classical buildings in the country
* An essentially Liverpool building, its design perfectly expresses the American classicism promoted through Charles Reilly's Liverpool School of Architecture
* Sculptural decorations, referring to Africa's contribution to Liverpool's economy, in combination with the bank's connection with slavery, add to historical interest of building. This amendment is written in 2007, the bicentenary year of the 1807 Abolition Act.