A Grade I Listed Building in Uffington, Lincolnshire 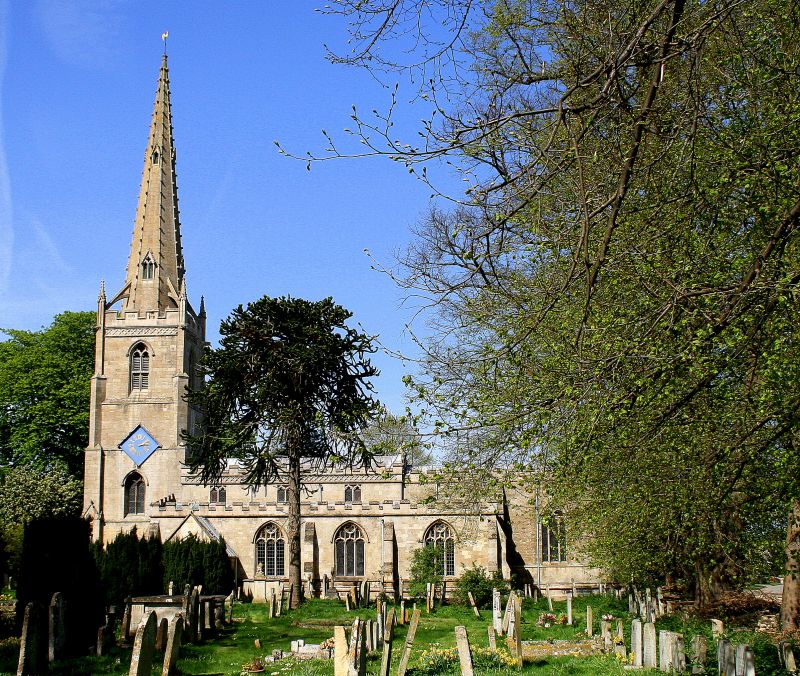 Parish church. c.1200, C13, C14, C15, restored 1864 by Edward
Browning of Stamford. Ashlar and coursed limestone rubble, lead
roofs. Western tower, nave, aisles, south porch, chancel, north
chapel. 4 stage C14 ashlar tower has clasping buttresses,
plinth, chamfered string courses, frieze, embattled parapet with
corner pinnacles. Set back crocketed spire with 2 tiers of
lucarnes in 4 principal directions. To the belfry stage are 2
light cusped headed windows with quatrefoils and brattished
transomes. In the ground stage are single 2 light windows with
hollow chamfered surrounds. The west doorway has elaborate
continuously moulded surround having bosses and vine scroll to
the outer concave order, and moulded hood. In the spandrels are
carvings of jousting helms with peacock devices. The doorway is
flanked by gabled niches to the buttresses having nodding ogee
canopies and statue brackets. There are similar niches to the
side walls. Above the door a 3 light window with cusped heads
and concave surround. C19 north aisle with 2 light window to the
west and 3 three light windows to the side, all with flowing
tracery. In the angle to the taller C15 embattled chapel is a
C19 doorway. In the coursed limestone rubble north wall are 2
tall 3 light windows with plate tracery, separated by a stepped
and gabled buttress, and in the east wall a similar 4 light
window. C19 chancel east window with 5 transomed lights with
flowing tracery, and in the south wall a similar C19 3 light
window. Nave clerestory has 3 paired C15 lights having cusped
ogee heads. Above is a lozenge frieze and embattled parapet.
The embattled north aisle was reconstructed C19 and now has 3
light windows with panel tracery, one of which is C15. South
porch also reconstructed C19 has double chamfered outer arch now
with C19 shafted reveals. The inner pointed doorway is
contemporary. Interior. 3 bay nave arcades c.1200 with circular
piers and abaci, hobnailed on the north, double chamfered round
arches. C19 arched braced roof rises from marble wall shafts on
elaborate figured corbels with Southwell style leaves to the
undersides. The tall C15 tower arch has a continuously moulded
surround and octagonal capitals. C19 chancel arch with clustered
shafted reveals, elaborate floriate capitals and deeply moulded
pointed head. To the south an opening to the pulpit has C19
richly moulded nodding ogee arched head. There are double
chamfered arches to the east ends of the aisles, that to the
north with an annular respond. In the north wall of the chancel
is a double chamfered arch with reset annular responds. In the
south side a C19 opening matching the chancel arch and an early
C13 piscina with shafted reveals and reset arched head. In the
north chapel west wall a further round headed arch can be seen
truncated by the north wall. In the south wall are 2 small ogee
headed niches, and the east wall has a quatrefoil frieze beneath
a blocked opening. Stained glass, in north chapel east window by
Waites 1851, and east window by Clayton and Bell, 1874.
Fittings. In the nave a fine brass candelabrum dated 1685, with
cherub's head. All fittings are C19, including font with marble
embellishments and elaborately carved pulpit. In the tower are 3
painted charity boards. Monuments: In the chancel north wall a
C14 arched tomb containing a full length effigy of a knight in
armour with his head on a helm with S collar and feet resting on
a lion, the legs were probably worked C16. Above, the 4 centred
arch has fleurons and a panelled archivolt, the ogee hood is
elaborately crocketed and rises to a foliate finial, beneath
which is a triangular panel of seaweed carving. The tomb chest
sides have quatrefoil frieze with shields. To the south wall of
the chancel is an elaborate alabaster and marble sideboard tomb
to Robert Manners d.1587 and his son, Olyver, depicting the
deceased kneeling opposite an altar in armour with ruffs. Behind
are semi-circular arches with roses in the archivolts. A fluted
frieze bearing a memorial inscription is supported on composite
pillars. Above is a cartouche of arms flanked by single shields,
all in strapwork surrounds. The gadrooned base bears square sunk
inscription panels. On the north side, a similar wall monument
to Dr. Stanton, Dean of Lincoln, showing the deceased and wife
kneeling opposite with 2 female weepers. Above are 2 semi-
circular arches with an angel blowing bubbles and Time.
Composite columns support a frieze and a cartouche of arms
supporting an obelisk. Beneath are scaley brackets and a death's
head corbel. To Mary Bertie, d.1678/9, a fine wall plaque with
draped inscription panel surmounted by a cartouche of arms with
flaming urn and gadrooned base. Also a monument to Charles
Bertie, d,1710, in a similar draped style with palm leaves and
escutcheon. In the south aisle a pair of late C18 monuments to
the Pierrepoint family in the form of obelisks with urns,
rectangular inscription panels, painted panels of arms beneath.