A Grade I Listed Building in Hougham, Lincolnshire 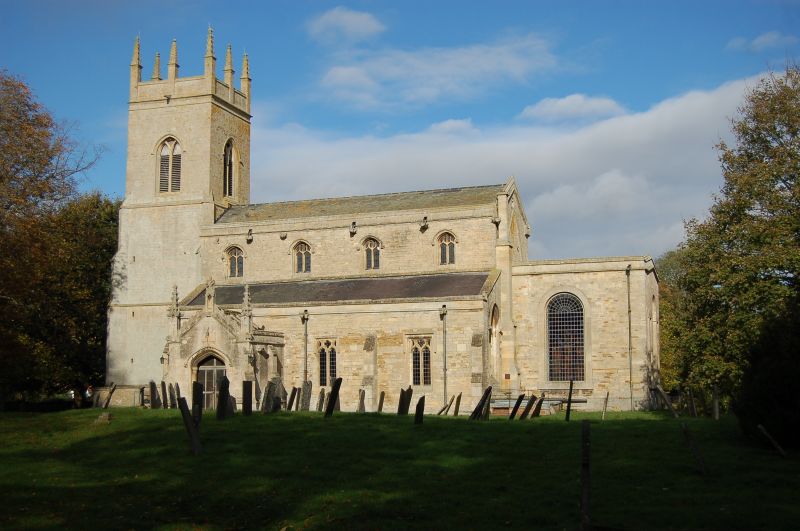 Parish Church. C11, C12, C13, C14, C15, C16, C18, restored 1845 and in 1895-6
by Temple Moore. Coursed limestone rubble, ashlar, slate and lead roofs.
West tower, nave, north and south aisles, south porch, rectangular chancel.
C14 ashlar west tower base with plinth, upper parts of which are C18. Three
stages with stepped angle buttresses, lit by two light windows with Y tracery
beneath pointed heads with chamfered hood moulds with human mask label stops.
Most of the windows are C18 restorations, as are the tower pinnacles which
share the same curious dogtooth motif. Only the ground floor window in the
west side of the tower appears entirely C14. North wall of nave is in coursed
limestone rubble with four paired clerestorey lights having cusped trefoil
heads under pointed arches with chamfered hood moulds and human headed label stops,
gargoyles and a moulded blank parapet above. The north aisle of coursed
rubble has a C19 3 light window in the west wall and 2 large 3 light C15
windows with cusped heads and segmental arches in the north wall with 2 large
3 light early C16 windows at its east end, which is built in ashlsr, and which
are distinguishable by the flatly rounded heads of the lower lights. The C13
north door has a deep heavily moulded head with human mask label stops. The
blank parapet and projecting gargoyles appear to be early C16, since the gargoyle
are rather larger and more naturalistic than the C15 examples. East wall of the
aisle has a C19 door. East wall of the chancel has large leaded 3 light
Venetian window, now blocked from within by C19 reredos. South wall of chancel
has large leaded C18 semi-circular headed window. South wall of nave has 2
light C14 clerestorey windows beneath a blind parapet with small quatrefoils
on the underside of the springing course. South aisle has C19 windows in the
east and west walls, and a pair of two light reticulated traceried lights beneath
flat hood moulds in its south wall. There is a further single C14 light west
of the porch. C15 blind parapet and projecting gargoyles over. South porch
is C15 with outer four centred arch with a sundial above. The roof has four
stone ribs and a pinnacled decorated gable with a gabled and floriated niche
above the crest. Inside, the south nave arcade is C12 with double stepped arches
with moulded cushion capitals and chamfered hood moulds. The arcade is
arranged in a rhythm of one and a pair with a pier of masonry between the two
groups. This masonry appears to be C11, since it contains the western reveal
of a three stepped window which is cut by a C12 arch of the arcade. The nave
walls are notably tall and narrow, and they may be C11 too. The north arcade
is c1300 with octagonal piers supporting pointed stepped and chamfered arches
with moulded capitals. Over the south door is a section of repositioned Anglo-
Saxon cross shaft, probably C10, with flaccid interlace and knotwork in a plain
panel (c/f Creeton, Lincs.) A C19 pierced stone screen in the Gothic style
divides off the Thorold mortuary chapel at the east end of the north aisle.
The chancel arch is C14 and matches the north arcade except that it has castellated
capitals and human mask label stops. First floor entry to C14 rood loft to
south of chancel arch, and ground floor doorway with flat lintel in the north
wall of the south aisle with blocked ogee headed door over. Also in the south
aisle is a slightly ogee headed piscina and 4 C14 castellated statue brackets
at the east end. In the east wall is a blocked square stone squint. Chancel
has a C16 arch in its north wall opening into the north aisle; the head comes
to an awkward point, and the jambs are severely moulded with one concave order,
probably early C16. Corbels and principal timbers of the south aisle roof
are probably C16 also; corbels are grotesque masks on the north and pendents
on the south. Fittings: C18 chancel roof and panelled screen at base of
tower, otherwise all is C19 including the Norman Revival font. Monuments:
early C13 knight in north aisle, recumbent, chain mail only with surcoat,
sword and shield, head on cushion, feet resting on a lion; possibly Sir Hugh
de Bussey, crusader. Small rectangular inscribed brass panel on south
chancel wall beneath window to Robert Meres, d.1652, Professor of Theology,
Chancellor of Lincoln Cathedral, with coats of arms. Marble wall plaque on
south wall of chancel, still life of chalice and books to Rev. George Thorold,
d.1832, by P. Rouw. Horizontal marble block with crowned cross and sacred
monogram in the north aisle to Arthur Thorold, d.1854, by A. Boucneau, resting
on a C15 monumental brass matrix of a knight and lady with shields beneath.