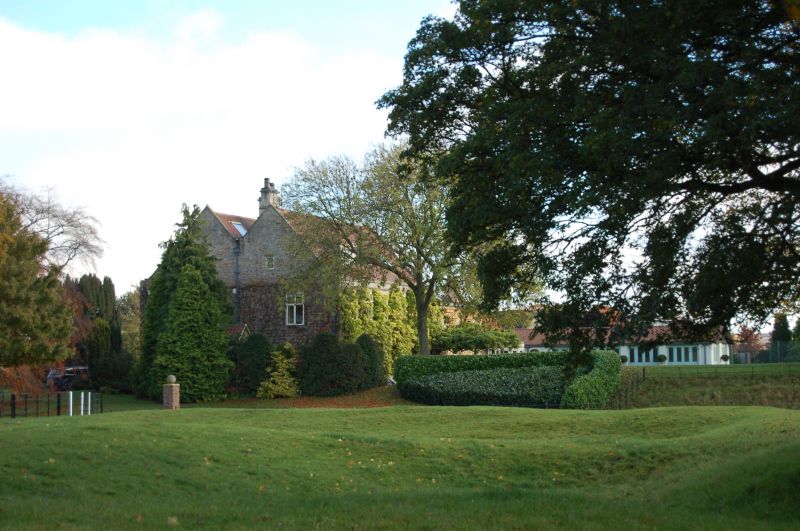 Country house; early C13, early C15, late C16 and with C19 and C20 additions
and alterations. Coursed and banded limestone and ironstone rubble with
ashlar dressings, stone coped gables and stone ridge stacks on tiled roof.
Parallel ranges, with C15 and later range attached to east. North front of
2 storeys with garret, has plinth and low moulded parapet. 5 bay facade with
quoins having central C20 panelled door with overlight covered by C19 open
porch of Tuscan columns supporting narrow frieze and cornice; flanked by 2
windows with C19 timber cross mullions in earlier moulded stone surrounds with
flat lintels and keystones. 5 first floor windows are similar. Interior
has in south eastern room an early C13 triple respond approx. 5'6" in diameter
with a plain chamfered capital and triple corbels above. The western wall
of the same room is contemporary and contains an internally splayed window
and in the same wall as the respond is at least one other contemporary arched
opening. This may be the base of a keep tower of the de Bussey family. East
of the main block is the south wall of a chapel licensed in 1405. This
contains 3 large 2 light early C15 perpendicular windows with cusped heads.
This was the site of the Medieval house of the de Bussey family and is
surrounded by a moat.
Source: D. L. Roberts, unpublished M.A. Thesis.