A Grade I Listed Building in Theddlethorpe All Saints, Lincolnshire 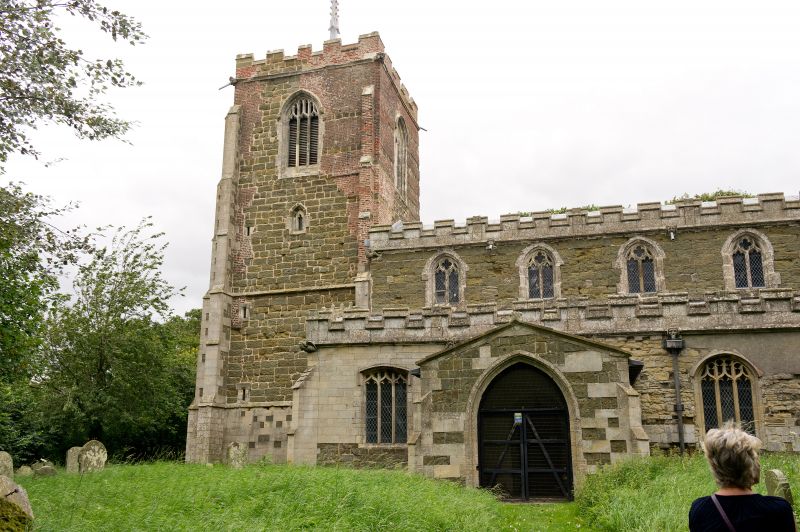 TF 48 NE THEDDLETHORPE LOUTH ROAD
ALL SAINTS
2/43 Church of
All Saints
9.3.67
I
Parish church. C12, c.1380-1400, late C17, 1865-66 minor
repairs. Squared greenstone rubble, coursed limestone rubble,
limestone dressings, C17 brick patching, lead roofs. Western
tower, nave with clerestory, aisles, south porch, chancel. The 4
stage tower is of squared greenstone rubble with a substantial
amount of brick patching, it has chamfered string courses,
stepped corner buttresses, battlemented parapet with corner
gargoyles and unusual lead covered central crocketted pinnacle.
To the belfry stage are 3 light louvred openings with panelled
tracery. On the south and west sides are small ogee headed
lights to the third stage. The west door has a continuously
moulded surround, hood and human head stops. Above is a 4 light
window, cusped ogee heads, panel tracery and moulded surround.
All windows are of a similar design. The north aisle has a
battlemented parapet with large gargoyles and corbels, it has a 2
light west window, 4 three light side windows, a continuously
moulded doorway and an east window of 3 lights. The clerestory
with battlemented and pinnacled parapet and gargoyles has 5 two
light windows. In the chancel north wall is a bricked up 3 light
window. The chancel east window of 3 lights is in an original
moulded surround with C19 tracery. In the south wall is a C19 2
light window, and an original one of 3 lights. Beneath is a
continuously moulded priest's doorway. The east nave parapet
has quatrefoil piercings and crockets. The south aisle east wall
has a crocketed parapet and corner pinnacles. In the south wall
which is partly limestone rubble are 2 windows of 3 lights and
one of 4, the easterly pair having cambered heads. The west
window is of 3 lights. The gabled south porch has a
continuously moulded outer arch, side benches, and low pitched
lead roof. The inner door is continuously moulded but with
striking ogee head. The rear arch is rounded. Interior. North
and south nave arcades are of 5 bays with octagonal piers and
responds and double chamfered arches. In the north wall of the
nave are incorporated many fragments of C12 chevron and beakhead
voussoirs. The double chamfered tower arch is continuously
moulded, with above the scar of an earlier nave roof. Concave
moulded octagonal chancel arch. The restored nave roof
incorporates the moulded principals of the original with coats of
arms of the donors and fleurons, and is of arch braced queen post
construction. Both aisle roofs match the nave and are
substantially intact. In the east wall of the south aisle is a
medieval altar slab with consecretaion crosses above which is a
stone reredos. This consists of a moulded stone frame with
quatrefoils, fleurons and human heads, cusped triangular top
surmounted by a crocketed pinnacle flanked by lower pinnacles.
Fragments of post medieval texts can be seen on the north wall of
the north and south aisles. The north aisle has a further
medieval altar stone, a statue bracket, and a door to the rood
loft. In the chancel is a blocked window on the north side and
on the south side is a triple sedilia supported on apparently
reused C12 shafts, with beyond a piscina. In the east wall are 2
human head statue brackets. In the south aisle window are some
fragments of C15 glass. Fittings. In the chancel fine early C18
turned altar rails, and a delicate marble altar table with turned
legs presented to the church in 1717. The C15 chancel screen of
7 bays enriched with panelled tracery to the upper parts and in
the bases of the bays. The upper part of the screen consists of
an early C18 marbelled cornice. To either side are parclose
screens of 1535, the upper parts of the panels have finely
wrought pierced Renaissance carvings of coats of arms, grotesques
and human heads. The pulpit and lectern are C19. The pews
have C16 poppy head ends and the rear pews have contemporary
brattished back rails and blank ogee tracery. At the rear of
the church is a late C17 richly carved oak pulpit removed from
Skidbrooke Church. The font is C15, octagonal with quatrefoils,
fleurons and human heads, having C18 openwork wooden cover. On
the west wall of the nave a section of lead from the roof bears 2
graffiti of 2 C18 Ships of the Line. At the west end is
preserved the C15 wooden pinnacle from the tower roof.
Monuments. In the south aisle chapel is a brass to Sir Robert
Hayton who died 1424 showing the deceased in plate armour with
feet resting on a lion. Nearby is the matrix for a double brass
of which only one brass shield remains. In the chancel are 2
early C18 marble wall plaques to members of the Newcomen family
with cartouches, arms and scrolls. A fine marble monument to
Hon. Charles Bertie and his wife Mary d. 1727, with sarcophagus,
obelisk and portrait busts beneath an open pediment supporting a
cartouche of arms, made by Andrew Carpenter, London. Beyond is
an early C19 monument in the Greek Taste.