A Grade I Listed Building in Alford, Lincolnshire 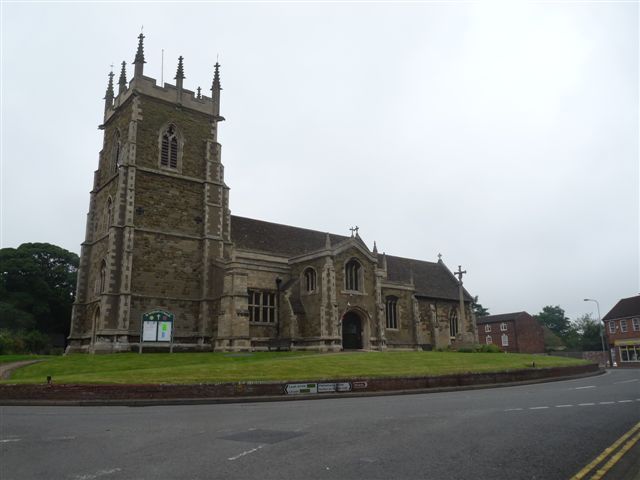 Parish church. Mid C14, C15, c.1530, C17. Restoration c.1867 by
Sir G.G. Scott. Coursed and squared greenstone, limestone
dressings, stone slate roofs. Western tower, nave, aisles plus
additional C19 north aisle, south porch with parvise, chancel,
north chapel. The 4 stage tower was rebuilt 1525-1535, but
part of the top stage and parapet are C19. Moulded plinth, 3
string courses, castellated parapet with pinnacles, stepped
corner buttresses. The paired belfry lights have C19 cusped
heads with quatrefoils and moulded hoods. The continuously
moulded west doorway has a deeply sunken middle order. To first
floor is a window of 3 lights, to the second a window of two
lights, both with panelled tracery. The C19 north aisle has a
west window of 4 lights. In the north wall are 3 further 3
light windows with flat heads, and a pointed doorway. The east
window is of 4 lights. The north chapel has 2 recut reticulated
windows and a pointed doorway, and in the east wall is a further
reticulated window of 4 lights. The early C14 chancel has a
reticulated window of 3 lights in the north wall, and 2 to the
south, all with moulded hoods. The handsome contemporary east
window is of 5 lights. All chancel windows are set in full
height recessed openings. On the south side is a C14 low side
window. The south aisle east window is of 3 lights with cusped
intersecting tracery. In the south wall are 2 three light panel
traceried windows, one with flat head, the other with triangular
head. Beyond the south porch is a late C17 4 light mullioned
and transomed window with cyma moulded cornice. The C16 gabled
south porch is surmounted by a parvise room. It has moulded
plinth, stepped corner buttresses, moulded parapet with
pinnacles. The continuously moulded outer arch is 4 centred
with moulded hood. The upper chamber is lit by single 3 light
windows to the south and west, both with deep chamfered reveals.
In the porch is a cambered doorway in the west wall leading to
the parvise. The inner south doorway has engaged angle shafts
with floriate capitals and a filleted roll moulded head, moulded
hood with C19 stops. The door is contemporary with a design of
panel tracery to the upper part, and an ogee headed wicket with
early lock plate and latch. Interior. Nave arcades, C14, 4
bays, octagonal shafts with floriate capitals, double chamfered
arches. The north western pier has plain octagonal moulded
capital. The C16 tower arch has octagonal responds and triple
chamfered arch. The C19 chancel arch has single chamfered order
and reveals. The north aisle arcade is of 4 bays, added by Sir
G. G. Scott in 1867, matching the nave. At the east end of the
original north aisle is a C16 4 centred continuously moulded
doorway to north chapel with above a 3 light panel traceried
window. In the south aisle is a trefoil headed piscina. At
the west end of nave the rood loft doorway and 4 turning steps
survive. In the north wall of the chancel is a pair of C19
moulded arches to organ and vestry. In the south wall is a C14
triple sedilia. All fittings and font are C19 apart from the
rood screen and pulpit. The late C14 screen is of 5 bays with
pierced panel tracery in upper and lower parts with cusped ogee
arches, bearing traces of original paint. Above is a C20 rood
design by L. Bond. The richly decorated Jacobean pulpit panels
remain with C20 base and steps. One panel is arched with
grotesque figures and the other is in a panelled design. At the
angles are fluted Ionic columns. In the chancel and north
chapel north windows are panels of C14 stained glass decorated
with foliage. The stained glass in the east window is by Sir
Ninian Comper. In the chancel a large standing alabaster
monument surrounded by its original wrought iron railings, to Sir
Robert Christopher, d.1668, and wife, of Alford Manor House.
Recumbent effigies, he in armour, hand on breast, back wall has
eared plaque with broken segmental pediment and coat of arms.
The corners of the tomb chest have swagged balusters, and the
west end has a further coat of arms. Attributed, probably
wrongly, to Edward Strong. In the south aisle is a scrolled
cartouche wall monument, surmounted by a female bust, probably
late C17, possibly a member of the Tiptoft family. In the nave
is a ledger slab with full length portrait in low relief and
black letter inscription to a priest, Richard de Watton, d.late
C14. The church was rebuilt by William of Tothby on the site of
the old church which was pulled down c.1350, and the North Chapel
was founded as a chantry chapel by the Tothby family in 1396.
The parvise was first used as a Grammar School, founded by
Francis Spanning in 1566.