A Grade I Listed Building in Baumber, Lincolnshire 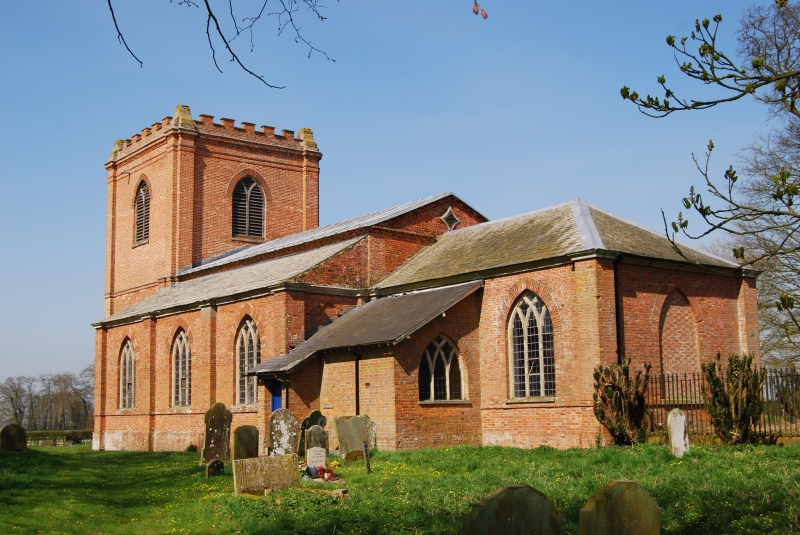 BAUMBER CHURCH LANE
TF 27 SW
4/1 Church of
St. Swithin
14-9-66
I
Parish church. Cll, C12, C13, 1758, 1892, restoration by W.
Scorer. Red brick with ashlar dressings, coursed limestone
rubble, lead and slate roofs. Western tower and porch, nave,
aisles, chancel and vestry. The stone church was completely
brick clad and refenestrated in 1758 and the 2 stage brick tower
has plinth, cill band, dentillated band, corbelled band,
battlemented parapet with dog tooth cornice. There are corner
buttresses and at the base of the south western one the stone
foundations of the earlier church can be seen. The south side
has a 3 light pointed window and to belfry stage on all faces are
2 light openings with wooden tracery and louvres. The western
side has a gabled porch with battlemented parapet, corner
panelled buttresses which are surmounted by decorated ashlar
obelisks with foliate crockets. Above the porch on the tower
face, the corbelled band is formed into a pediment and beneath
this is a plain eared ashlar panel. The porch has side lights,
and the inner doorway is late C12, set in coursed limestone
rubble walling, with zigzag decoration to the square cut arch.
The single order of collonettes is missing, but of the remaining
capitals, one is waterleaf, the other has worn figure carving.
The door is C18 having 6 panels. On the north side of the tower
is a blank pointed headed opening. The aisle has a plinth, cill
band and moulded ashlar cornice. At both ends is a blank pointed
headed opening with a blank quatrefoil over. The north side has
3 three light windows subdivided by plain buttresses. The nave
has a dentillated cornice and lead roof, and at the east end is a
lozenge shaped opening with curved sides. The chancel which has
a hipped slate roof has 2 three light windows to the north side
and a blocked pointed opening to the east end. The south side of
the church matches the north with the addition of a C19 vestry
with 3 light east window and south door. All windows have
matching intersecting cusped tracery dating from C19 restoration.
Interior. The rear of the west doorway is a plain semi-circular
headed opening, as is the opening from tower to nave. On the
nave side of the doorway a stripwork surround has been hacked
back, suggesting a Cll date. Inside the tower are massive
framed trusses, possibly built to support the bell chamber. The
wide C13 3 bay arcades have octagonal piers and capitals with
double chamfered arches. The C13 chancel arch has been replaced
by a 3 bay C18 screen with octagonal posts and ogee arches with
feathered gilt decoration and finials. Behind can be seen the
C13 respond and detached annular shaft of blocked arches into
vanished chancel chapels. The chancel has a coved ceiling with a
pretty pierced quatrefoil frieze. On the south wall is a C19
door to the vestry. Above the chancel screen is a wall painting
including the Royal Coat of Arms and some texts. The nave has
panelled walls to dado height. Between nave and chancel is a low
timber screen which extends to form a C18 pulpit with brattished
top. The fine tester is now hung at the west end of the north
aisle, it has an ogee top with finials. The C19 choir stalls and
octagonal moulded font match the C18 Gothick fittings. In
the nave are 4 hatchments to the Lievesey and Clinton families,
and a Commandment Board. Monuments. At the west end of the south
aisle is a large ledger slab with Lombardic inscription to John
Eland and his 2 wives d.1473. On the south wall is a tablet to
the Barber and Rowlands families d.1776-1797.