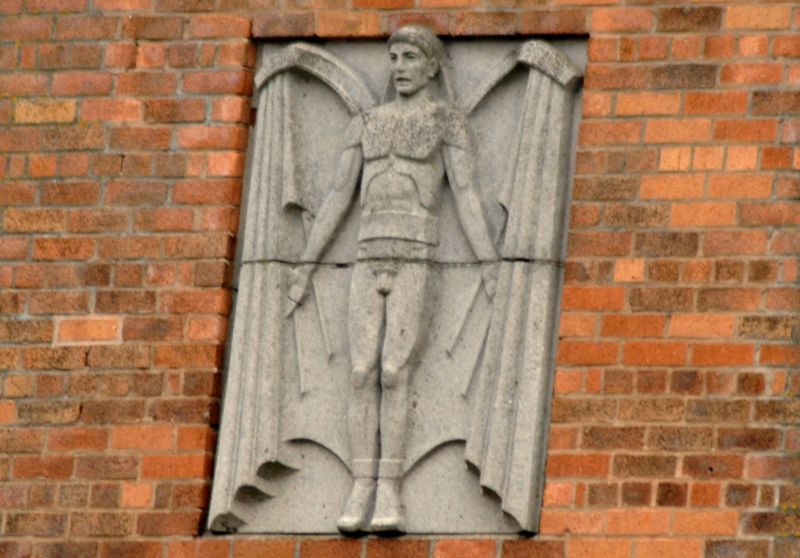 GV II*
Airport hanger, later used as terminal building, converted to commercial use 2001-3. Completed July 1941, architect unknown. Steel structural frame with brown brick claddings and facings, incorporating the 'Lamellendach' steel segmental arch roof system patented by the Junckers company of Dessau in 1920. One of 3 component structures designed as the central ensemble for the new Liverpool municipal airport designed by E.H. Bloomfield of the Liverpool Corporation's Land Steward and Surveyor's office.
PLAN: Massive open plan interior designed for aircraft hangar use and one of 2 hangars designed to flank a central curved terminal building and to face onto a wide V-shaped apron at the perimeter of a grass flying field.
EXTERIOR: The end elevations of the building are its principal architectural elements, and are composed of almost full width openings originally fitted with motorised folding doors, now retained in folded position behind a C21
glass screen wall at the north-east end of the building. Flanking the door openings at both ends of the building are substantial brick piers, between which extend the upper section of the end elevation, with a segmental centre section incorporating a wide glazed multi-light panel shaped like a bird with outstretched wings. The brick piers to the south-west elevation incorporate stone bas-reliefs of a standing winged man. The long side walls incorporate continuous glazing to the wall heads. The exterior of the building has been extensively repaired, and later extensions have been removed.
INTERIOR: Original interior notable for the complex patent steel-arched 'Lamellandach' roofing system based around a mesh of cross-braced components and vertical and horizontal tie rods. This achieved a lightweight, wide-span structure incorporating full length glazed panels to the apex and lower side areas. Above the steel frame were timber rafters supporting sarking boards. The interior has now been adapted and fitted out for commercial use, the most notable intervention being the introduction of wide glazed screens in the former door openings.

HISTORY: The hangar was planned as part of the original ensemble, and was intended to be a mirror image of Hangar No.1. However, its construction was taken over and finaced by the Air Ministry in 1939, with military use in mind, and both its dimensions and design changed accordingly, particularly in respect of the roof structure, ironically, a German design. The building, which was partially adapted to serve as an international terminal in the 1970's, fell into disuse with the other 1930's buildings when the new Liverpool airport and terminal opened in 1986. The building underwent comprehensive repair and refurbishment in 1999-2001, and has now been carefully converted to commercial use.

SOURCES: 'Speke Airport, Liverpool' Unpublished report prepared for English Partnerships by Stephen Levrant. 1997. 'Berlin, Liverpool, Paris - Airport Architecture of the Thirties.' Paul Smith and Bernard Toulier. 2000.
The former No.1 Hanger at the former Speke Airport is of special architectural interest as a major component of the most complete civil aviation ensemble of the pioneer phase of international air travel to survive in England. It formed part of the most ambitious municipal airport project of the inter-War period, and had a significant military role in the second World War. Its roof structure is now a rare surviving example of the use of the German 'Lamellendach' steel arched roofing system in England.