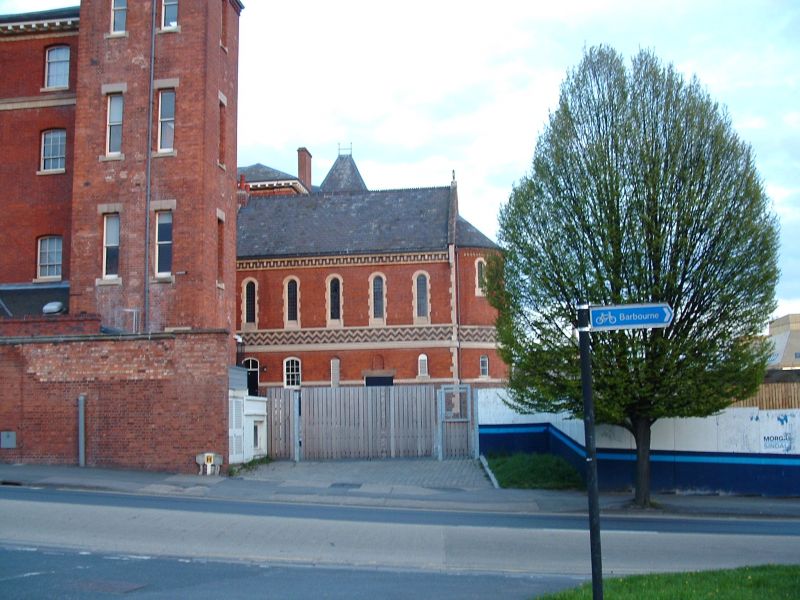 II
The Infirmary was designed by Anthony Keck and completed c. 1770. The masons were recorded as Bowen Stephens and Bott and the carpenter was Edward Haskow. It has an H-shaped plan and two storeys and a basement. A chapel was added in 1850 by Henry Day and he also added a third storey in 1864. Extensions to three of the wings, including sluice blocks by Martin and Chamberlain were complete by 1874. The south-east wing, including a similar sluice tower was added in 1887 by Fell and Jones of London. An outpatients' department was also added by 1874 and an extension to this in 1912, both by A.Hill Parker. The style is classical, save for the chapel, which is Neo-Norman. The building is of red brick with ashlar dressings and a hipped slate roof.

DESCRIPTION
EXTERIOR: There is a continuous stone band above the basement and a string course at the level of the ground floor sills as well as another below the added top storey. All the sash windows have segmental heads and are of 12 panes to the lower floors and 9 panes to the top. The deep, timber eaves are supported by brackets. The east (front) entrance has 11 bays, symmetrically disposed. The central three bays project slightly and the right wing, which is to the original pattern, also projects and has two bays. The central doorway is approached by a double staircase and has panelled doors and a pedimented doorcase of painted stone. There is a pedimental gable above the central three bays with an arched window. The left wing was extended in 1887 and includes a sluice block, attached to the extreme south-eastern corner, with a steeply pitched hipped roof and iron finial. The north and south flanks of the building were originally each of five bays with the three central bays projecting slightly. The wings were extended in the C19 and there are now 7 bays to the south face and 6 bays to the north face with attached sluice blocks at the extreme north-west and south-west corners with steep roofs, as before. The rear has 10 bays with a canted bay with hipped roof to the ground floor centre. On line with this is the chapel, which is connected to the main building by a short corridor. This is of red brick with a slate roof and an apsidal end facing west (ritual east). It has 5 bays and is set above a basement which has round-arched openings. There is a deep band of polychromatic chevron decoration below the sills of the windows and a dentilled cornice which is also decorated with coloured bricks. To the north of the infirmary block and facing onto Castle Street is the former Outpatients Building. This is single-storeyed, of red brick with a gabled slate roof with central rooflight and with nine bays to the entrance front. To the centre is a door with moulded stone surround and arched head with alternating stone and brick voussoirs. At either side and connected by flush stone bands at the level of their heads and sills are the windows, set in pairs. There is a dentilled brick band beneath the eaves. Also facing Castle Street and to the east of the former Outpatients Department is the Edward VII Memorial Annexe. This is of red brick with ashlar dressings in an Edwardian Baroque style and has a 5-bay, 2-storey central block flanked by single-storey wings of 2 bays. Dividing the bays are pilasters with banded rustication and the first floor has four circular windows with aprons and swags and a similar window to the open pediment at centre. In the centre at first floor level is a tablet with lettering in relief which reads "THIS ANNEXE WAS/ERECTED AS THE/CITY MEMORIAL/TO/KING EDWARD VII/THE PEACEMAKER/1912". The lateral, single-storey wings appear to have been altered or else not completed to the intended pattern.

INTERIOR: The entrance hall of the Keck building has a deep cornice and arched niches and panelled doors to both side walls with a plain fire surround and stone flagged floor. The division between the entrance hall and the spinal corridor, which extends through the building, is marked by a screen of two Tuscan columns which stand on short plinths and have pilaster responds to either side. The columns frame the door to the board room, which is panelled and has a lugged surround. The board room has panelling below the dado with raised and fielded panels. There are pilasters at either side of the window openings. The fire surround and overmantel are early-C20, of varnished wood, and include a carved plaque celebrating the founding of the Provincial, Medical and Surgical Association, which later became the British Medical Association. Two staircases lead off from the spinal corridor. The northern one has been replaced in the C19 and now has stone steps and a cast-iron balustrade. The southern one appears to be original and has wooden treads, a close string and vase and column balusters with square newels. This extends down to the basement and also up to the later, second floor, indicating some re-use of material from the earlier, matching northern stair. The ward rooms in the wings have been opened up to include the former sluice areas. The chapel interior has five bays with round-arched windows. The roof trusses rest on stone corbels and there is a miniature corbel table to the top of the wall. The chancel has a triple arch with nook shafts and chevron mouldings to the arches and also to the ribs of the chancel vault, which extend down the walls, between the arched windows. These meet with a miniature arcade which encircles the chancel below the level of the windows. There is mosaic decoration to the walling above the arcade, including the Star of David, Alpha and Omega and the Chi-rho. The pulpit has alternating concave and convex mouldings to its side and the wooden altar rails have miniature columns and an interlaced arcade.

HISTORY: The hospital which had been started in 1745 in Silver Street, Worcester was found to be inadequate and so a campaign resulted in the purchase of two acres of land in Artichoke Field (the core of the present site) in 1765. Anthony Keck won the competition to build the new hospital in the following year. Richard Broad's map of Worcester of 1768 shows the infirmary building in outline for the first time (although it was not completed until 1770 at a cost of £6,085). In 1832, at a meeting in the board room, held by Charles Hastings, the Provincial Medical and Surgical Association was founded, which was later to become the British Medical Association (BMA). In 1849-50 the board room and consulting room wing was extended by Henry Day and at the same time Day added a chapel to the west of the board room, using c.£300 raised by the Swedish opera singer Jenny Lind in a concert given in 1849. In 1864 Day was responsible for alterations to the building which included the addition of a further storey, and in 1866 the railings from the Worcester Arboretum were moved to the site to form the north and east screens.

The Infirmary has several later buildings attached to each side. With the exception of the buildings described here, that is the Infirmary building of c.1770 together with its upper floor of c.1855, the extensions to its north-west, south-west and south-east wings and their sluice blocks, the chapel and the former Outpatients block and the Edward VII Memorial Annexe, no other buildings or parts are included in this designation.

REASONS FOR DESIGNATION DECISION:
The Royal Infirmary Building , Worcester is listed for the following principal reasons:
* The building by Anthony Keck is a good and notably intact example of a mid-C18 hospital designed with a corridor plan.
* Despite some alterations the essentials of the plan and architectural details remain in situ.
* The Neo-Norman chapel of 1850 is a good example of its type and retains interesting fittings.
* The Outpatients Department added in the late C19 and the Edward VII Memorial Annexe of 1912 both complement the appearance and functioning of the Infirmary.