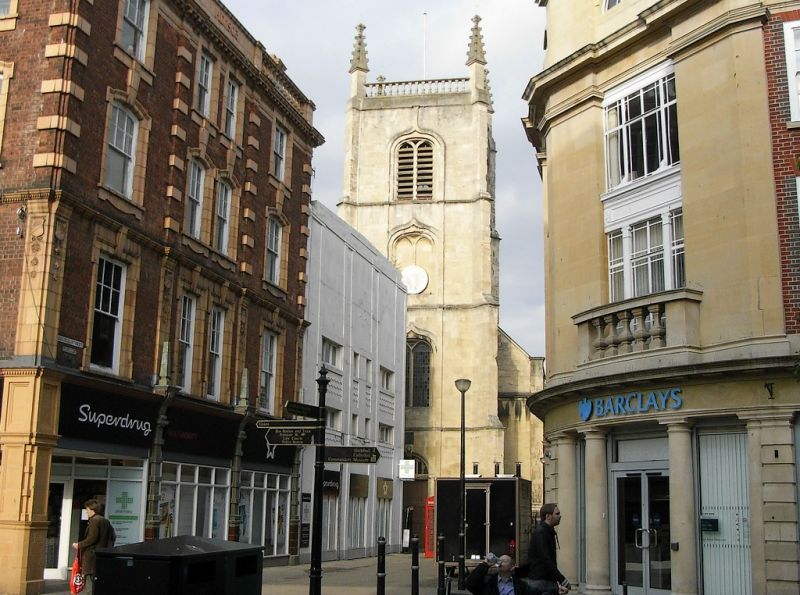 West tower in four stages, marked by string courses and with diagonal off-set buttresses; west entrance has double six-raised-and-fielded-panel door with carved lintel surmounted by fanlight with Perpendicular-type glazing in tooled architrave with moulded imposts and cherub's head carved in keystone. Upper stages have Y-tracery to two-light windows (leaded lights to first floor, blind above and louvred to belfry) with chamfered mullions and triple-chamfered reveals.

Nave has fluted full-height Doric pilasters between bays and round-arched, multi-pane windows with tooled architraves and keystones. Three-bay east end articulated by Doric pilasters and with projecting pedimented bay to centre pierced by an elaborate Ionic-style Venetian window; clock above parapet set in pediment; outer bays have panelled doors set below tall windows, all with similar round arches.

INTERIOR: aisleless, having a segmental vault with ribs springing from corbels each side with crowned and winged cherub-heads; bosses with Gothic motifs and circlet of cherub-heads over altar. Chancel divided by screen walls with raised and fielded panelling and outer six-panel doors, ramped up to tall 'plinths' surmounted by Roman Doric columns, panelling continues as reredos. Similar panelling to north and south walls approximately 2 metres high. Venetian window to interior has Ionic columns and cornice with acanthus modillions. Canted west gallery standing on square fluted wooden pillars; staircase has two-panel door. Leaded glass to windows, except late C19 stained glass to east designed by Eginton.

SUBSIDIARY FEATURES: railings and gates to west end have two levels of rails and spearhead bars, gates have segmental arch.

HISTORICAL NOTE: built on site of C13 church. Made redundant in 1977. A remarkably complete example of a mid C18 church, representative in its plan and internal details of both the C18 established church and civil administration and ritual. One of an important group of four churches in Worcester which, in their present form, are largely eighteenth century, with Church of All Saints, Broad Street; Church of St Martin, Cornmarket and former Church of St Nicholas, The Cross. Their towers, together with the Cathedral (qv) and St Andrew's Tower, Deansway (qv), form the most significant feature of Worcester's skyline.

A key building in this part of the city centre, forming a focal point for and having good group value with all the listed buildings in Church Street, St Swithin's Street and Mealcheapen Street (qqv).