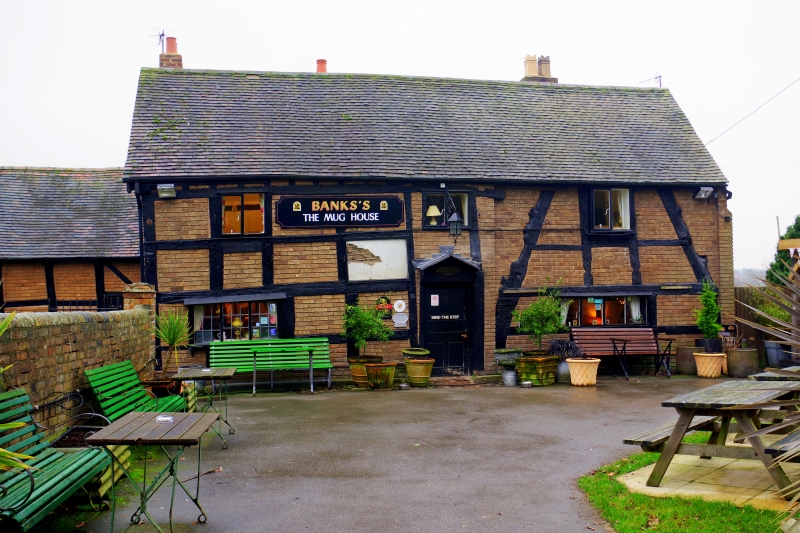 Public house. C16 or earlier origins, possibly rebuilt, later
altered and enlarged during mid C19 and re-modelled mid C20.
Part timber-framed, mid-late C20 brick infill and replacement
walling, part brick, plain tiled roof and 3 brick stacks to
rear main ridge. Three framed bays; 2 storeys.
FRAMING: irregular, mainly 4 square panels from sill to
wall-plate, cruck truss used as part of wall-frame in front
right bay; swept brace in lower corner of left gable end and
collar and tie-beam truss with queen struts in gable above.
FRONT ELEVATION to north-east: ground floor has a 3-light and
a 4-light casement, 3 first floor 2-light casements and
central 5-panel door, all flush-beaded, with gabled canopy on
brackets.
INTERIOR: much altered. A parallel mid-C19 range adjoins to
rear; 2 storeys with dentilled eaves cornice and at its
south-east gable end projects a single framed bay, single
storey wing, lower in height and having 2 square panels from
sill to wall-plate, a short straight brace in the upper
corners of the front wall-frame and a collar and tie-beam
truss with queen struts at its gable end; in the angle with
the main range it has a ledged and battened door.

Formerly listed in the parish of North Claines on the 71st
list for the District of Wychavon, County of Hereford &
Worcester.