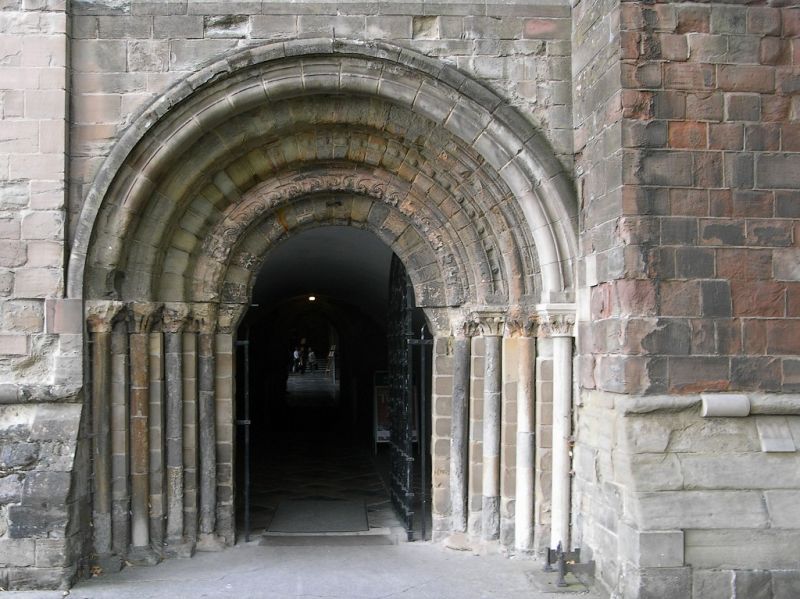 Also known as: College Hall COLLEGE GREEN.
The monastic refectory, now school hall. Mainly c1076-99
possibly with C10 origins, the upper part is c1476-99
incorporating Christ in Majesty c1220-30, and with C19
restorations including rainwaterheads dated 1886, and C20
gate. Coursed sandstone with slate roof; 2 external stone
stacks to north wall; cast-iron gate and rainwaterheads.
Rectangular on plan with lean-to extension to west. Early
Norman undercroft surmounted by hall. 5 bays. South side:
chamfered plinth; end off-set buttresses to 3/4 height;
pilaster buttresses to upper stage roll-moulded sill band. End
entrances: that to west a C19 creation which has flight of
steps to double plank doors with decorated hinges in
double-chamfered surround with roll- and hollow-moulding and
face stops. To right a round-arched entrance with 5 orders of
arches on 4 slender columns with eroded capitals, some recut,
the inner order on plain responds; arches have double roll,
roll-moulding with carved embellishment, roll and ball flower,
a double roll moulding and a single order of roll-moulding
(restored); hoodmould; within an ornate cast-iron gate.
Entrances to undercroft: 7 round-arched openings (one blocked)
mainly with plank doors, one glazed; to west are two
straight-headed openings, continuous roll-moulded impost band
rising as continuous hoodmoulds over round-arched openings.
Upper stage has five 3-light windows with reticulated tracery
to heads. North side has 5 similar windows, the second from
east end contained reading pulpit and projects on chamfered
base with roll moulding. To north-west angle an octagonal
stair turret. Continuous cornice and parapet with chamfered
copings. Entrance to right a pointed plank door in surround
with double-chamfered arch with three then two orders of roll
moulding and hoodmould with foliate decoration and three small
animals, winged lion stops. Further entrance to left. There is
evidence of two arches to this wall. East end has
straight-headed 5-light window with reticulated tracery to
head in arched recess with one order of roll-moulding and
hoodmould with face stops, moulded sill. Winged eagle to coped
gable end. West end has 7-light window with reticulated
tracery.
INTERIOR: east wall of hall has defaced over-life-size
Christ in Majesty in an elongated quatrefoil surrounded by the
Signs of the Evangelists; friezes below, with heads and
beasts, and above; thinly-vaulted niches to left and right.
Windows have single order of fluted columns and
triple-chamfered arch to head with ovolo-moulding. Hoodmoulds
with head stops. Columnettes with bosses support renewed
timber ceiling with ribs. The reading pulpit was on the north
side and its window bay is articulated by a tiny rib-vault
with an angel boss. The undercroft is sub-divided. At western
end has two and a half squat pillars with plain caps, the
westernmost becomes rectangular on west side, further
rectangular pier; scalloped capitals to responds; groined
vaulting. The eastern end has barrel vaults. Windows have
deep, chamfered reveals. At eastern end to ground floor a
barrel-vaulted passage leads to cloister and has low,
cambered-arched plank door with roll-moulded surround giving
access to undercroft; pointed plank door with
Perpendicular-type traceried decoration in taller,
round-arched surround with hoodmould gives access to cloister.
The north side of the hall is incorporated into the cloister
of Worcester Cathedral (qv).
All the listed buildings in College Green are part of a
significant group forming the setting for Worcester Cathedral
(qv) to the north side.
Scheduled Ancient Monument.
(The Buildings of England: Pevsner: N: Worcestershire:
Harmondsworth: 1968-1985: 307).