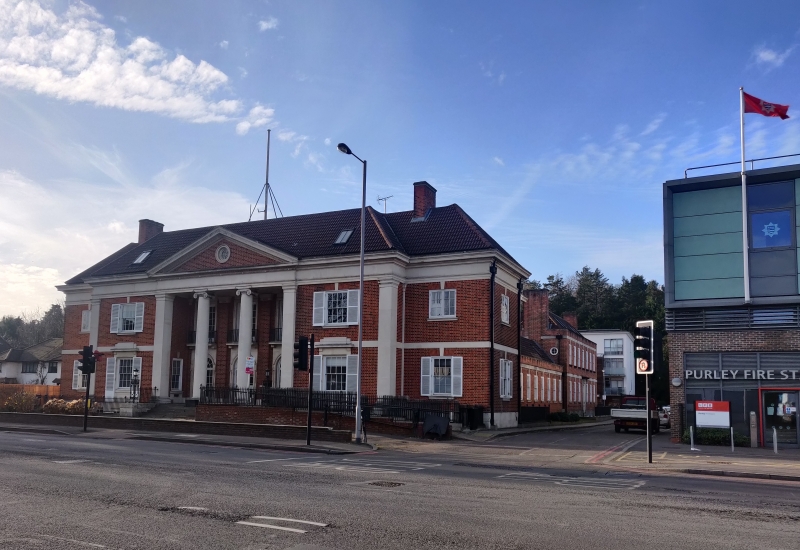 Council offices. Designed in 1929, following a competition, by Architects Nicholls and Hughes in a Neo-Classical style and opened by the Lord Mayor of London in 1930. One of the specifications was that the building should allow for future expansion and the rear part of the building was completed by May 1937, designed by the same architects in matching style and materials. Built of red brick with stone dressings and hipped pantiled roof. One or two storeys and basements with sash windows.
EXTERIOR: Front or south east elevation of two storeys and basement: seven windows. Central three bays have pediment with oculus and two giant Ionic columns "in antis". First floor has set back three French windows with cast iron balconies on first floor and round-headed French windows with keystones to ground floor. On either side is a bay with 16-pane sashes and shutters. The end bays are set back with casement window to first floor and 16-pane sash to ground floor with wooden shutters. Attached are cast iron area railings with urn finials and elaborate cast iron stand with lamp. The right side railings have been modified to provide disabled access. South west elevation has ground floor curved bay to Town clerk's Office. Attached to the front range is a section of two storeys and basement four windows . Twelve-pane sashes with keystones to ground floor. Right side doorcase with brackets, cornice with panel, half-glazed door and attached cast iron railings. To the left is a one storey portion with eight twelve-pane sashes. Terminating this elevation is a section of two storeys and basement seven windows with twelve-pane sashes and central doorcase with stone door surround with panel and console brackets. North west elevation, which is of two storeys and basement, has nine sash windows. The central seven bays are recessed and have twelve-pane sashes with keystones, The end windows have eight panes. Wide central doorcase with taller central console brackets and double doors. End projecting bays have external chimneystacks. North east elevation is almost identical to the south west elevation except that there is no bow window to the ground floor and the doorcase to the rear has been converted into a window. The building has an internal courtyard which has twenty on all sides.
INTERIOR: Entrance hall of 3 x 3 bays with round-headed arches with keystones and impost blocks, double doors, coffered ceiling, an original built-in semi-circular clock and San Stefano marble floor. The main staircase to the right leads to the council suite and is a well staircase with cast iron balusters and column newel. There are a series of radiator baffles with a design of interlocking circles and Greek key and six-panelled doors moulded architraves. The Crush Room has fluted Ionic columns and inlaid marble floor. The chairman's Office is panelled with coved cornice and has an C18 style fireplace and cupboard. The Council Chamber has a ribbed barrel-vaulted roof with anthemion and scrolled design and double Ionic pilasters. The walls are panelled and at each end are sliding oak doors to two Committee rooms. Both of these have fireplaces with eared architraves and Ionic columnsand the north western one has a dumb waiter. Both Members cloakrooms have original tiling, sanitary fittings and the gents has black marble urinals. The remainder of the building has a central staircase to the rear with cast iron balustrading and oak handrail. Although some partitions have been inserted many original fireplaces survive, either with eared architraves or bolection-mouldings, including one in the basement with Egyptian or Greek style tiles. Original cloakroom fittings, doors and strongroom to basement.