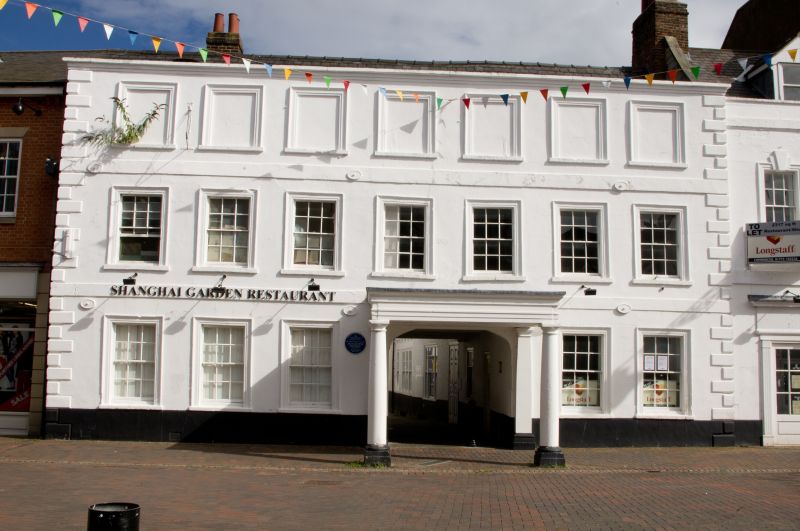 In the entry for :

The address, the description and the grade shall be amended to
read:

Hotel. c1500 core with facade of 2 builds: Mid C18 and late C18.
Timber-framed core; stuccoed facade; Welsh slate roofs. Facade
of 3 storeys and 7 bays plus 2 bays to right of 2 storeys and
attic but of similar overall height: Complex range of various
builds set around courtyard to rear. 7-bay part is late C18:
raised quoins, floor-bands, architraved windows with projecting
sills. Ground floor windows boarded-up at time of survey;
carriage entrance to bays 4 and 5 with basket arch covered by
Doric porch having incomplete entablature. 1st floor has 12-pane
sashes (some boarded-up). Blind windows to false 2nd-floor
windows set beneath a corniced parapet which conceals a steeply-
pitched roof. 2-bay part to right, mid C18: ground floor has tall
windows with architraves, pulvinated friezes and cornices; floor
band beneath 1st floor windows having 12-pane sashes in
architraves with double keystones; band beneath coped parapet.
Gabled dormer with 4-pane sash; large brick stack at junction
with lower 7-bay part. Interior: The front range contains 4 bays
of timber framing dating from the late 14th Century to the early
15th Century. This is contained within the 2 bays to the left of
the passageway, above the passage, and the further bay to the
right. The left end wall contains square framing with corner post
with curved braces, 2 intermediate posts, a first floor bressumer
tie beam and 2 intermediate rails. The ground floor room has 2
elaborately moulded cross beams, with apholiate carved timber
boss at the inter section. The tie beam which marks the end of
this bay is also moulded and carved with small decorative panels.
The room above is modern. The bay to the right has full height
square framing in the first floor cross wall with daub infill,
and above a crown post truss. This roof continues for a further
2 bays, both with crown post truss, the centre one with
additional braces in a scissor form. A few rafters survive with
fire damaged ends. The rear wing to this range contains some
later 16th to 17th Century framing with straight braces. Late
17th Century turned banister stair.