A Grade II* Listed Building in Newton on Trent, Lincolnshire 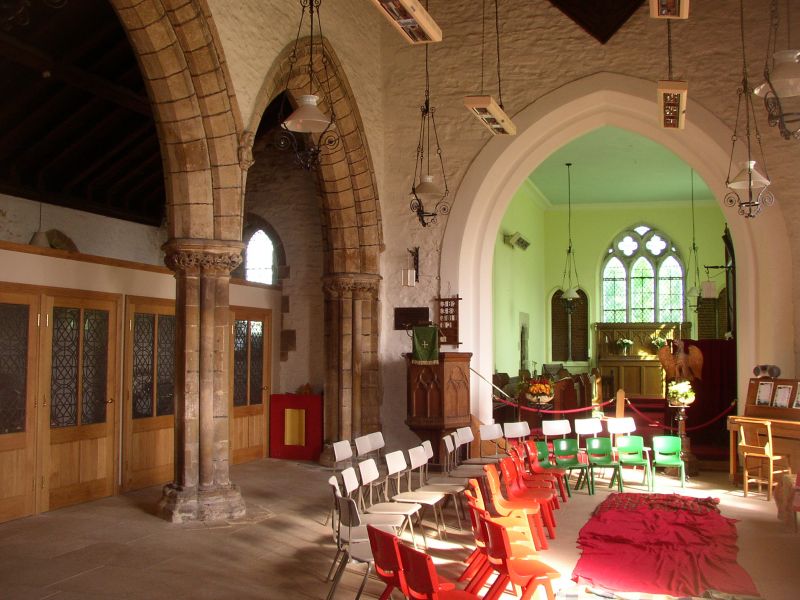 Parish church. 012, early C13, C13, C15, 1876 restoration.
Coursed blue lias rubble with ashlar quoins and dressings, some
red brick dressings, render, slate roofs. Nave, western tower,
chancel, north aisle and vestry. C12 tower of 4 stages with
plinth, 2 string courses and battlemented parapet. Early C13
west doorway with keeled and round angle shafts terminating in
stiff leaf capitals and moulded pointed head with outer half
round hood mould. Above is a single light with double chamfered
surround, moulded hood mould and human head label stops. The 2
upper stages have paired lights to each face, the lower being
pointed and chamfered, the upper with cusped C15 heads. The
north aisle is a rebuilding of the mid C19 with single lancets in
the west and east walls and 3 similar windows to the north. The
chancel is early C19 in rendered rubble, with a single paired
light to the north wall, and 2 similar windows to the south, and
a large triple light with quatrefoils to the east. On the north
side is a vestry in rock faced ashlar with paired windows. The
nave south wall contains 2 C19 2 light Y tracery windows set in
larger blocked openings with brick relieving arches. Between
them is a small recut round headed C12 light which is single
splayed on the inside. The south wall is of weathered lias
rubble with limestone alternating quoins. Cut by the westernmost
window is a sloping setting of stones, possibly part of a now
vanished south porch roof. Interior. 3 bay early C13 north nave
arcade with quatrefoil piers with keeled foils and slender round
shafts in the diagonals. Very fine stiff leaf capitals of
several varieties and double chamfered arches, hood moulds with
later figured label stops and only the 2 heads at the extremities
are original. C13 tower arch with octagonal responds and
capitals and double chamfered arch. Above is a blocked door.
The early C19 chancel arch is plastered, with 2 uninterrupted
chamfers. The north aisle has a moulded C19 sill band. In the
chancel are double pointed niches to either side of the altar
containing painted commandments and prayers. All fittings are
C19, apart from the font which is a recut C12 tub with slightly
tapering sides. Over the chancel arch is a painted hatchment.
On the south wall of the tower are 5 repositioned fragments of
C15 bench ends and a further hatchment on the opposite wall.