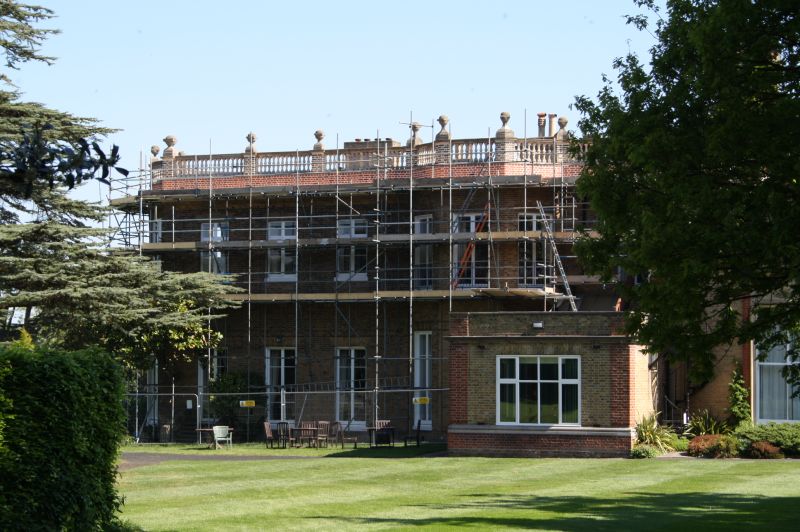 2.
The Antiquary, William Camden, had a house here from 1609 until his death
in 1623. The first Earl Camden, who was Lord Chancellor from 1766-1770 but
is better known as Lord Chief Justice (Sir Charles) Pratt, also had a house
here from 1760-1805. This house was largely rebuilt in C18 style, by
N W J Strode in 1860, though some portions of it survive, particlarly the
curved bay to the North West. The house was leased to the Emperor,
Napoleon III and the Empress Eugenie in September 1870. The Emperor died
here on 9 January 1873. The Empress continued to occupy the house until
after the Prince Imperial's death in 1879 but moved to Farnborough, Hants.,
in 1883 as soon as the house which she built for herself there was completed.
The house is built of yellow brick with red brick window dressings and
stringcourse. The main portion has 3 storeys and 7 windows. The outer
window bays are flanked by pilasters rising the whole height of the building
of yellow brick edged with red. The centre window bay projects with a
curved pediment and containing a cartouche. Its ground and first floors
project still further, the portions at the sides forming a pilaster effect,
with a balcony above the doorway supported on brackets and a clock above
the first floor surmounted by a panel of baroque sculpture. Balustraded
parapet with solid portions above the pilasters surmounted by vases.
French windows on ground and first floor. Sash windows on second floor.
Glazing bars intact. On each side of the main portion is a wing on ground
floor only with red brick quoins, a balustraded parapet with ball caps and
a large tripartite window. The centre portion of each is surmounted by a
carved panel and a curved pediment. Listed principally for historical
reasons. Good interiors include entrance hall, oval card room, drawing
room, dining room (said to be C18 French importation) and several other
smaller rooms on the ground floor. Service wing to north.