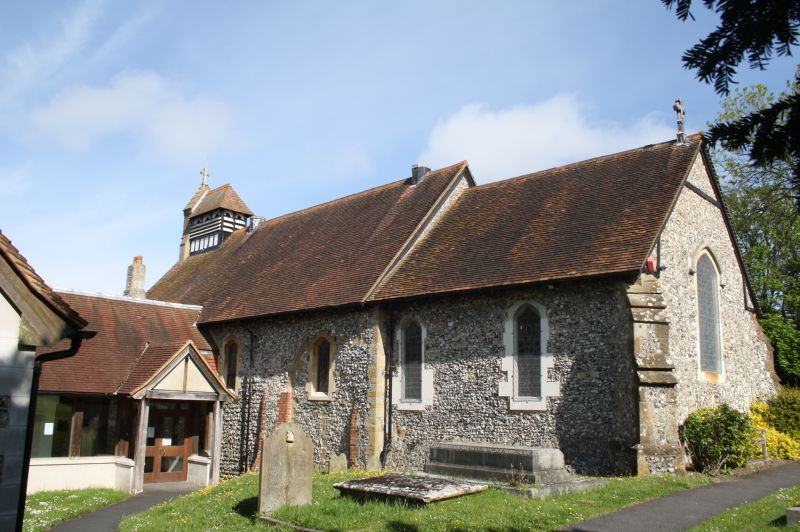 PLAN
Nave with N and S porches and W bellcote with continuous chancel; large L-shaped complex of modern parish rooms to SW joined to the nave. The remains of a former S tower were discovered in the mid C20.

EXTERIOR
Nave W window C19 with reticulated tracery. Above it a small stone bellcote with a timber louvered bell-chamber, running along the roof ridge. The nave roof has two small polygonal vents. Nave N wall has three single light windows with trefoiled cusping. Timber N porch on dwarf brick walls, dated 1883 The C13 N door has moulded orders and capitals. S nave wall has two single light windows with shouldered segmental heads, probably C18 in origin. The eastern window is set within blocking for the former SE tower arch. The ends of the former tower walls have brick quoining. The C13 S door is now within the vestibule to the parish rooms complex and was unblocked to provide access to the parish rooms from the nave. Late C20 parish rooms complex in keeping with the rest of the building. The chancel has two cusped lancets on either side, partly renewed. The chancel E wall was rebuilt in 1950 following WWII bomb damage, and the E window is a single, large light with a slightly pointed head, replacing an earlier window of 2 lights. The church rooms on the SW were added in 1992.

INTERIOR
The late C12 or early C13 chancel arch is pointed and has a single, chamfered order on chamfered imposts. The former S tower arch has an unchamfered order on an impost with a carved head of the C12. Timber W organ gallery of 1733, lengthened and rebuilt in 1880 when the nave was lengthened. Former vestry is now incorporated into the vestibule to the parish rooms.

PRINCIPAL FIXTURES
C13 trefoiled piscina in chancel. Chancel panelling with blind tracery panels, after 1883. C18 painting of Moses, formerly part of a pair with Aaron from an altarpiece. Royal arms in the style used after 1837, painted on leather and framed.

Stained Glass: Love by Morris and Co, 1909. Fragments of the matching Faith, Prayer and Hope, damaged during WWII are reset in the W window. Chancel windows 1952 by James Blackford.

HISTORY
There is evidence for Roman and Romano-British settlement at Keston, and apparently Romano-British graves were discovered under the chancel E wall during excavations in 1950. Keston is in Domesday Book, but the church itself is not, and the present structure is Norman in origin.