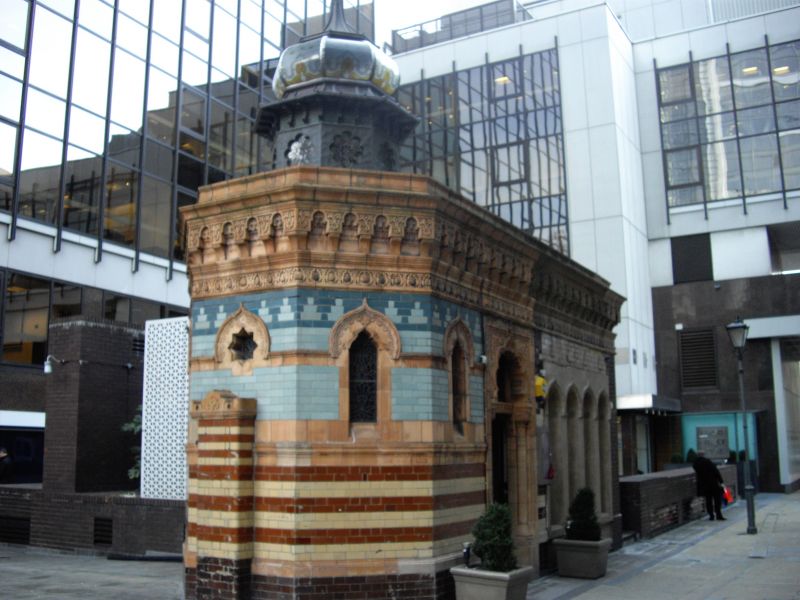 BISHOPSGATE CHURCHYARD EC2 (South Side)
No 8

(Formerly listed as the Gallipoli Restaurant)

Small rectangular building with polygonal apse. Flat roof. Single storey with two main rooms below ground level approached by stair in apse. Apse clad in faience tiles being black at ground level, alternating bands of cream and brown to sill level and pale blue with a darker patterned frieze above. Eastern window star-shaped; flanking windows (two each side) lancets with shaped heads; all set in terracotta with stained glass and linked by continuous rich distended ogee woodmoulds. Deep terracotta entablature in elaborately ornate Islamic style which continues around the building. Crowning the apse, a copper octagonal lantern with multifoil stained glass lights and projecting bracketed cornice surmounted by a coloured glass onion dome with metal star and crescent finial. Entrance on the north side having an elaborately ornate Islamic style terracotta doorcase with attached columns and multifoil arch. To the right, a late C20 three-light window.

Good and unusual Islamic style tiled interior, lobby lined with ornate interlocking tiles, the design for which was registered by Elphick; pink and white dado, green and white above. Tiles continue down stairwell leading to lobby with tile framed mirror and two main rooms both with ornate multi-coloured tiled pillars, beams and cornices. One room with framed panels of interlocking tiles with shallow niches having multifoil arches on chevron enriched colonettes. Other room has tiled archway and panels of hand-painted tiles.

The baths remained in use until the 1950s. When built, the site was extremely cramped (Broad Street House stood over much of the baths) leaving only sufficient room for the small building above ground. The ingenuity of the planning was praised in The Builder for 9 February 1892.