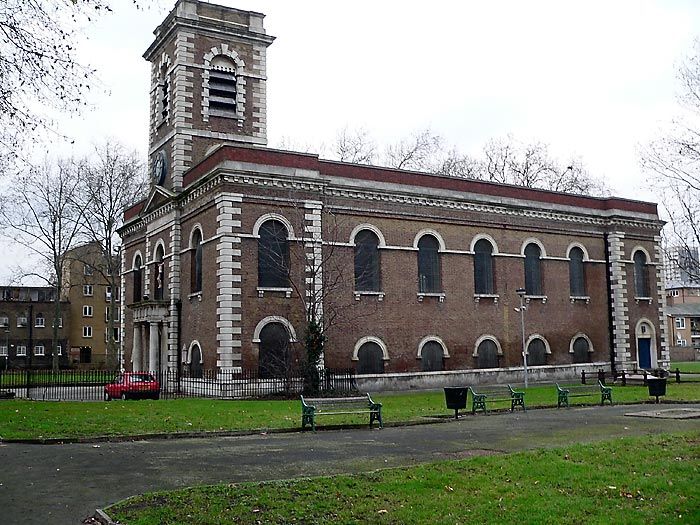 EXTERIOR: Classical style with tower to centre of west end, this rising above pedimented, slightly advanced central section. Central doorway with stone surround, and portico with Doric columns; panelled doors with fanlight and stone archivolt with keystone and impost blocks. Stone quoins emphasise the most easterly and westerly bays and the tower. The side elevations have quoins and slightly advanced bays return to north and south, also with a former gallery door. The side elevations then have a further five bays with dentil cornice, the upper windows under moulded rounded arches with continuous stone band at impost level; below are similar, shorter windows above the stone plinth; the parapet has been rebuilt. The eastern bay is again slightly advanced, and with quoins. The wide east end has a full-width parapet, rebuilt in a sympathetic style, and a rebuilt Venetian window with Ionic pilasters and niches in the smaller apertures, where formerly a taller arched opening (now blocked by the Lady Chapel). The roof was rebuilt and the interior completely remodelled in the 1950s.

INTERIOR: The entrance leads to a plain vestibule with a hung wooden war memorial, and then the plan is mostly open, now without aisles or side galleries. The post-war refurbishment includes an upper-level Lady Chapel at the east end, this supported by concrete columns and faced African hard-woods and elm veneered folding screen with panelling carrying the apostles by Peter Snow, this having the appearance of an elevated reredos. Behind this is the Lady Chapel, reached by a prominent stair to south, with its wall and balustrade bearing a bas relief depicting the war between Heaven and Hell and St. Michael and the angels doing battle with the devil; this by Kim James. The Chapel has wall paintings by Barry Robinson, and there are sand-blasted glass doors by Heather Child. The altar below has sculptured panels by Robert Dawson. There is a new gallery at the west end with metal balustrade and carrying the organ. The font is an elegant vesica-shaped design in marble by Anthony Lewis. Around the exterior walls are the Stations of the Cross in wood-kiln fired ceramic by Donald Potter; the walls are otherwise plain, and the glass clear. Roof is steel-framed trusses with woodwool slab covering.

HISTORY: The Church of St Matthew was built 1743-46 as the church of the newly created parish of Bethnal Green. Nicholas Hawksmoor had produced plans for St Matthew's for the 50 Churches Commission of 1711 but, like all but 12 of the planned new churches these were never realised. Over thirty years later, the church was finally built to the designs of George Dance senior, whose prestigious Mansion House commission had just been completed in 1742. The site was chosen to be near the dense population of weavers in this area.

After a fire in 1859, which destroyed the interior of the church, rebuilding (which included adding a top to the tower) was undertaken to designs by T.E. Knightley. The church suffered from enemy action in 1940, when bombing destroyed the interior and the roof, though the external walls survived the onslaught. A temporary church was established within the church's shell and was dedicated in 1954. By 1961 the old church had been rebuilt with Anthony Lewis of Michael Tapper & Lewis as architect. This was first of Lewis' three post-war church re-buildings in Bethnal Green.

SUMMARY OF IMPORTANCE: St Matthew's Bethnal Green is of outstanding special interest as a church built 1743-6 to the designs of George Dance, senior, following the unrealised ambitions of the 50 Churches Commission of 1711 to build a church in Bethnal Green to designs drawn up by Nicholas Hawksmoor. The exterior retains much of its classical grandeur from this significant period of church-building in the capital, and that is the primary reason for its high grade of listing. The original interior was lost in a mid-C19 fire, and subsequently rebuilt after WWII bomb damage to the designs of Michael Tapper & Lewis, with works by many different artists of the period. There is further interest in this bold post-war interior.