War memorial to the children of Upper North Street School 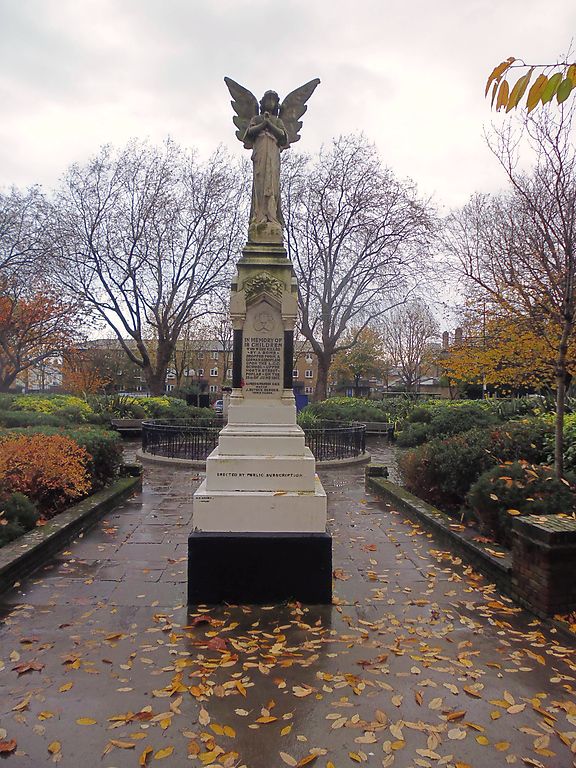 First World War memorial commemorating the deaths of 18 children in an air-raid on London on 13 June 1917.

The tall stone memorial stands in the northern part of Poplar Recreation Ground, in close proximity to a number of Grade II-listed buildings fronting the park, and the Grade II*-listed Church of St Mattias. It comprises an angel in mourning, wings outstretched with clasped hands, standing on a three-staged Gothic structure.

The upper stage takes the form of a hooded shrine. The blind arches of each face are supported by non-canonical Corinthian columns at each corner with black stone shafts and white stone capitals and bases. The arch of the front face is decorated with floral carvings in low relief, whilst the panel below has a roundel enclosing the seal of Poplar Borough Council. The principal dedicatory inscription reads IN MEMORY OF/ 18 CHILDREN/ WHO WERE KILLED/ BY A BOMB/ DROPPED FROM A/ GERMAN AEROPLANE/ UPON THE L.C.C./ SCHOOL UPPER/ NORTH STREET/ POPLAR ON THE/ 13TH OF JUNE 1917./ ALFRED H. WARREN O.B.E./ MAYOR/ J. BUTEUX SKEGGS,/ TOWN CLERK. The commemorated names are listed on the side faces, recording the name and age of each child.

The middle stage in a white stone comprises three steps supporting the shrine. An inscription on the middle step reads ERECTED BY PUBLIC SUBSCRIPTION with below A.R. ADAMS/ POPLAR. The bottom stage is a large black base.

German air-raids on Britain during the First World War began in early 1915, when Zeppelins were used to bomb coastal targets in the east of England. Airships continued to make such attacks as the war progressed, but in May 1917 the first raids using Gotha bombers began. These bombers were aircraft capable of long-distance flights, and were used to make day-light raids over south-east England.

On 13 June 1917 Kagohl 3, a squadron of the German Army High Command created specifically for bombing England, flew from Belgium to attack the City of London. Of the twenty aircraft in the squadron, 14 reached the target whilst three bombed Margate and Shoeburyness. The attack resulted in 162 civilian deaths and injury to a further 432 people. This was the first attack on London by a squadron of aircraft, following two earlier raids by lone aircraft in 1916 and 1917, and inflicted the single highest number of casualties of all the air-raids on the city.

Amongst the dead were 18 children from Upper North Street School, Poplar. A bomb dropped by a Gotha on its return from the City raid passed through the school roof and the upper stories, exploding in the classroom below where more than 60 Infants were being taught. Of the 18 children who died, 16 were aged five or six years. At least 37 other children were injured, some very seriously.

The children were buried at a funeral on 20 June, three in private interments and the rest in a mass grave in East London Cemetery. The burial service at the parish church, Poplar, led by the Bishop of London, was attended by many mourners. More than 600 wreaths were sent and a personal message from the King and Queen was read out. A fund was set up to send the bereaved mothers and surviving children for recuperation to Maidenhead, whilst a separate scheme to erect a memorial raised £1,455 9s 11d. This was used to support two beds in Poplar Hospital’s Children’s Ward and a bed at the Lord Mayor Treloar's Home for Crippled Children, Alton (Hampshire). The monument in the Recreation Ground, provided by AR Adams, a local firm of undertakers, was unveiled on 23 June 1919.

This memorial marking the tragedy was unveiled by Major General EB Ashmore MVO DSO CB. Ashmore, a career Army Officer, had learnt to fly as early as 1912 despite his age (he was 40 when awarded his Royal Aero Club Certificate). During the First World War he served with the Royal Flying Corps and the Royal Artillery. Following the daylight air-raids that had such tragic effect in 1917, the London Air Defence Area was created on 31 July that year and Ashmore was appointed commanding officer. Ashmore reorganised southern England’s air defences and the improvements forced the German air-force back to night-raiding.

The war memorial to the children of Upper North Street School, which stands in Poplar Recreation Ground, is listed at Grade II* for the following principal reasons:
* Historic interest: as an eloquent witness to the tragic impact of world events on this local community, and the sacrifice it has made in the First World War. The memorial marks the deaths of 18 children in the first successful German air-raid over London by Gotha aircraft, a raid which caused the single highest number of casualties of all the air-raids on the city;
* Architectural interest: a memorial drawing on traditional funerary sculpture, motifs, and materials which through its size and simple dedicatory inscriptions reflects the enormity of this loss with great eloquence;
* Historic association: the monument was unveiled by Major General Ashmore, who commanded the London Air Defence Area that was established in response to the daylight air raids of 1917 including that of 13 June which the memorial marks;
* Degree of survival: the memorial was set up only five days before the Treaty of Versailles was signed formally ending the state of war between the Allied Powers and Germany, and has been little if at all changed since;
* Group value: with a number of Grade II-listed buildings fronting the park, and the Grade II*-listed Church of St Mattias.