A Grade I Listed Building in Bethnal Green, London 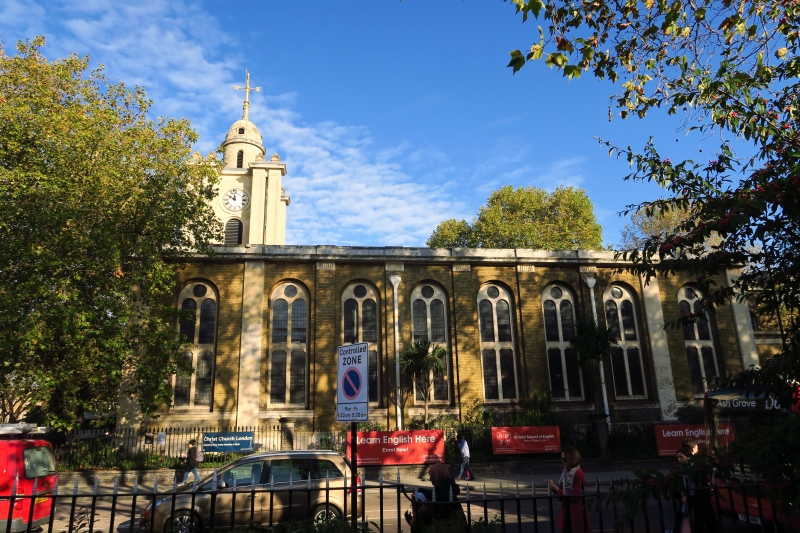 Parish church. 1824-25 by Sir John Soane. Restored 1871 by William Mundy after destruction of roof and interior by fire. Chancel altered and extended by G.F. Bodley 1888. Stock brick and artificial stone with stucco dressings; slate and leaded roofs.
PLAN: Nave and aisles with west tower and chancel with side chapels.
EXTERIOR: 3-bay west front articulated by giant pilasters at corners and paired giant pilasters in centre, all with fluted vestigial capitals. Centre bay with pedimented doorcase, the pediment on scrolled consoles with patterae. Double 14-panelled and fielded doors. Shallow rectangular recess above pediment. Between the paired pilasters are shallow recesses containing double 5-panelled and fielded doors. Outer bays with 2-light plate tracery windows of 1871, with transoms. Panelled parapet over centre from which develops the square west tower.
Tower with twin detached panelled pilasters at each corner, with fluting at top, and a continuous moulded cornice with acroteria over each pilaster. Within the recesses are one bell-opening with scalloped timber louvres below a clock face, repeated to each face. Circular drum with round-arched lancets to cardinal points. Moulded cornice below narrow dome with 4 reduced lucarnes. Spike finial carrying weathervane.
North and south aisles of 8 bays, separated by giant pilasters, those defining the east and west bays with stucco and fluted tops, the others just with stuccoed fluted tops.
2-bay chancel, the upper storey with 2 round-arched windows. Shallpow pedimented single-storey side chapels with one similar window to north and south and each with an east doorway (moulded architrave and double 4-panelled and fielded doors). East end of chancel with a large stuccoed plaque, but no openings.
INTERIOR: 3 bay western facade with central pedimented doorway and short central tower with cupola above. Tower and giant pilasters, stuccoed. Pilasters carried up to form piers linked to central tower. Facade to Roman Road has 7 windows. All windows round arched with simple flat stuccoed tracery.