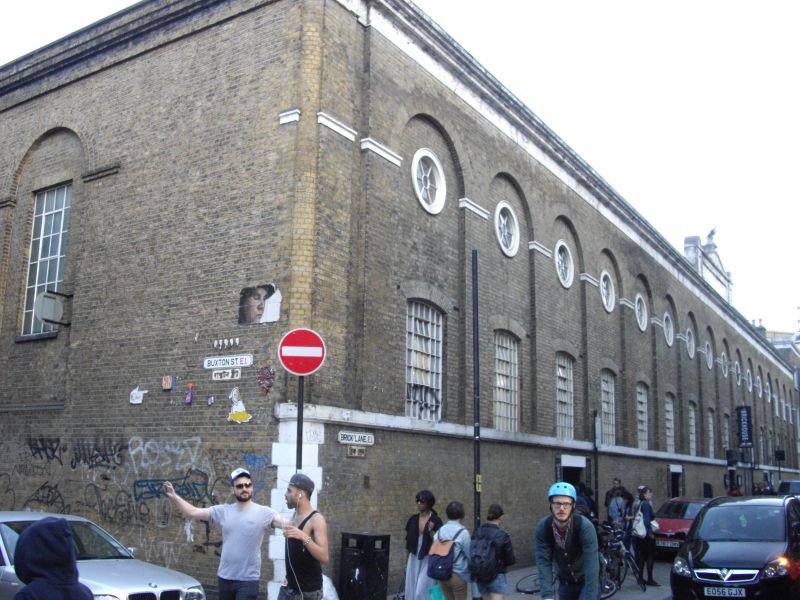 Former stable block to Truman's Brewery, subsequently adapted as a boiler house and now
fulfilling a variety of functions including offices and a music hall. 1837 by J Davison, AMICE,
with later additions and alterations. Stock brick, with a system of internal iron roof trusses
surviving internally. Rectangular composition to front, extended to rear when the horses gave
way to a boiler house and a chimney added in 1929-30.
Regular 16-bay, three-storey facade to Brick Lane, each bay having one round-arched metal
casement and one round window in arcade surround linked by ground-floor plinth and second
floor band at impost level. Heavy cornice and frieze leads eye to central aediculed pediment
with black eagle which gave the brewery its traditional name. Return elevation to Buxton
Street with metal casements in arcaded surrounds, some renewed brick heads. The interior
partially retains a fireproof iron floor construction, most complete at the southern end.
Sources: Survey of London, vol.XXVII, 1957
Civil Engineer and Architects' Journal, December 1837

The buildings of Black Eagle Brewery, on both sides of Brick Lane, form a group.