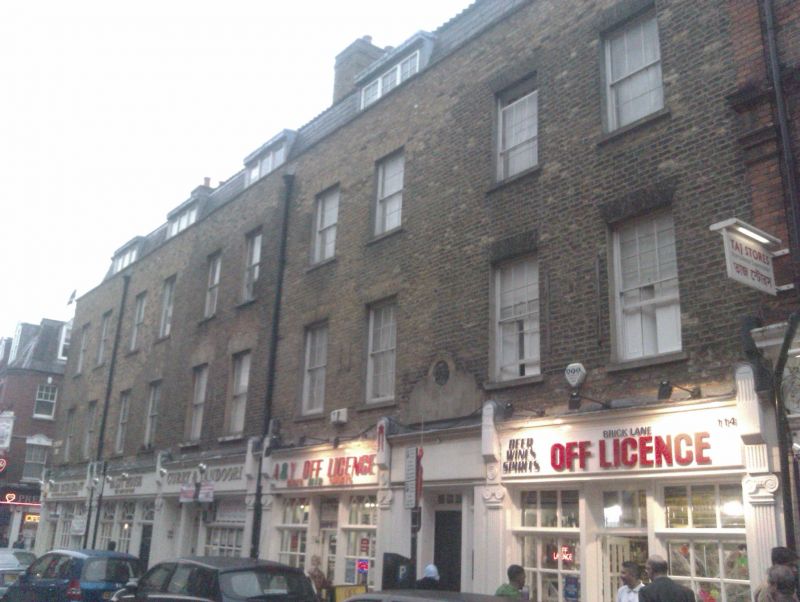 5 terraced houses. Early C18, refaced circa 1795. Yellow stock brick, Nos 116
and 118 with later patching. Slate mansard roofs with garret windows. 3
storeys, garrets and cellars. 2 windows each. No 122 with 4 window return to
Hanbury Street, all blind except one. Ground floors with C20 shopfronts except
No 120 with early C19 bowed wooden shopfront having pilasters supporting fascia
and cornice; windows and door boarded up. Passageway between Nos 114 and 116
with partly obscured Victorian circular plaque bearing the date 1797 over.
Gauged brick flat arches to recessed sashes (mostly), 2nd floor No 122 with
margin glazing. Parapets. Original lead rainwater heads. Interiors - No 114,
early C18 stair with Doric newels, moulded closed string, column on vase balus-
ters and moulded handrail. Panelling to stairwell. 1st floor back room with
early C18 panelling. Front room panelled c.1740 with unusual compound moulding
embellishing junction between timber panel and frame, dado rail designed as a
plinth cornice. Shutter boxes project into room (to compensate for recessed box
sashes combined with thin walls); boxes supported by unprecedented guttaed
scrolls with ramped down dado rail. Both rooms with full box cornices. Origi-
nal six-panel door and frame. No 120 with similar early C18 stair. Interiors
of Nos 116, 118 and 122 not inspected but possibly of interest. The plaque over
the entrance betweens Nos 114 and 116 probably refers to the foundation of the
Spitalfields Soup or Ladling Society which was founded in 1797 and operated from
premises reached via this entrance; the roof now forms part of No 112. The roof
and plaque are relics of early welfare provision in Spitalfields and testify to
the decline of the weaving industry during the late C18 in this area.