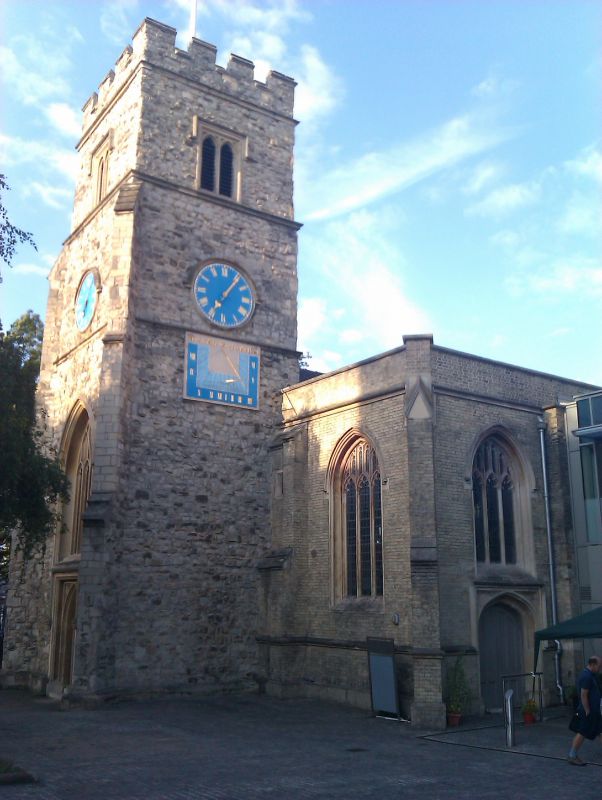 Church. Earliest remaining fabric dates from C15 with early-C16 and early C17 additions. Restored by Edward Lapidge 1836-7 and again in the 1980s by Ronald Sims following a fire in 1973. 2005 additions by Alan Pates.

PLAN: C15 west tower; nave (retaining elements of the C15 arcade); aisles (the south aisle with a gallery with vestry/sacristy and exhibition space below); Bishop West's chantry chapel, at the east end of the north aisle; chancel (now containing meeting rooms on two levels). The 2005 Brewer Building adjoining the south aisle, now forming the main entrance contains a café with community hall above and offices to the east.

EXTERIOR: the west tower is of three stages with embattled parapet, stair turret in the north-east corner, diagonal buttresses, and string courses. The upper stage has paired arched windows with louvers, set within a square hood mould. The middle stage has restored round clock faces in moulded surrounds on two elevations. The lower stage has an arched entrance with modern glazed doors and a deeply recessed window with rectilinear tracery above. There is a restored sundial on the tower's south elevation.

The aisles, surmounted by a straight parapet, are of five bays defined by buttresses, each bay containing a large tracery window with pointed arch and hood mould. The windows are continued to the west elevation either side of the tower. The windows of the south aisle, apart from that in the first bay, which has an arched doorway below, are enclosed by the Brewer Building with the window in the centre bay converted into an entrance into the main body of the church. The Brewer Building comprises a two-storey, steel-framed glass box with a full height lobby entrance to the west containing the main entrance and the cafe. The yellow brick facing to the first floor of the south elevation is pierced by large steel framed windows and extends a bay beyond the glazed west elevation. The east elevation of the chancel is partly obscured by the rear wall of the nursery (with its roof terrace and glazed vicar's office) and has narrow oblong windows, inserted in the 1980s restoration, replacing the gothic east window lost in the fire.

INTERIOR: the nave arcade has five bays with tall, moulded, four-centred arches supported on compound pillars with carved angel busts at the springing of the arches. On the south arcade the pillars abut the gallery installed in 2005 whilst the position of the original north gallery is commemorated by the retention of the C19 timber beams adjoining the four pillars of the north arcade. These beams support a steel corona over the sanctuary. The nave was paved with stone slabs in the 1980s and the walls left as unfaced brick. The daring 1980s textured unpainted plaster ceiling to the nave has a deep inverted pyramidal coffered design (used in reverse beneath the organ gallery), extending over the aisles as a zig-zag series of ridges. This ridged ceiling is continued in the former chancel, although here it is constructed of timber panels. The ground floor of the tower has a quadripartite vaulted ceiling with a central rosette from 1836. The chancel arch is glazed at its lower level with a timber screen hiding the mezzanine floor inserted in the 1980s over the meeting room in the former chancel.

The Bishop West chapel is of two bays and has a fine fan-vaulted ceiling (probably based on that in the north choir aisle at St George's Chapel, Windsor; West was Dean of Windsor between 1510 and 1515) with two bosses bearing the bishop's coat of arms. A pair of panelled, four-centred arches open into the chancel and opposing these are two north windows. A large, four-centred arch gives entry to the north aisle with a restored smaller arch and rose window above by Alan Younger (1933-2004).

Fittings include black metal hanging lamps and simple wooden sanctuary furniture designed by Ronald Sims. A Portland stone font from the 1640s has been reinstated on the south side of the nave. There are several notable C17 monuments. In the west tower: Richard Lusher (d. 1615), in marble with a broken segmental pediment bearing allegories and coat of arms supported by Corinthian columns, over a frame with strapwork and ribbon work flanked by obelisks; Catherine Palmer (d. 1619) in marble with the inscription framed by a strapwork cartouche and two Corinthian columns supporting a broken pediment surmounted by a coat of arms. On the north-west wall of the tower is a monument to Sir Thomas Dawes (d. 1655) consisting of a skull atop a plinth. This is the surviving element of a larger memorial which was not fully reinstated after the 1836-7 restoration. The Bishop West chapel has a brass and C15 and C16 ledger stones set into the floor, and C17 and C18 ledger stones, rediscovered after the fire, have been set around the altar. A collection of C18 and C19 lead and brass coffin plaques are mounted on the wall of the corridor behind the vestry. Stained glass is from the 1980s by Alan Younger. In the Bishop West chapel, the east window dates from 1845 by the Whitefriars Glass Company and the two north windows have attractive Pre-Raphaelite designs by Heaton, Butler and Bayne, dating from 1872.

SUBSIDIARY FEATURES: the boundary to Putney High Street has a low ragstone wall with stone capping and metal railings dating from 1885. The wall has three gateways with octagonal Bath stone piers topped with distinctive conical caps.

The origin of the church is uncertain but a church in Putney is first noted in 1291 and the Archbishop of Canterbury, Robert Winchelsea, held an ordination in the parish in 1302. The church of St Mary the Virgin was rebuilt in the second half of C15 including the addition of a tower and remodelling of the nave. Between 1515 and 1533 a chantry chapel was added by Nicholas West, Bishop of Ely (1461-1533), chaplain to Henry VII and Catherine of Aragon. Various additions and alterations were made to the church until 1836-7 when it was substantially rebuilt and enlarged by Edward Lapidge (1779-1860). This involved alterations to the tower, widening the nave, the addition of expanded aisles in yellow stock brick and the addition or replacement of windows in the Perpendicular Gothic style. In addition, the galleries in the aisles and west end of the church which had originally been installed in the early part of the C17 were replaced, a single-storey vestry added in the south-east corner and the Bishop West chapel moved from the south to the north aisle.

In 1973 the church was severely damaged by arson, which destroyed much of the roof, galleries and fittings. It was restored and reordered in 1980-2 by Ronald G Sims (1926-2007). As well as installing a new roof, Sims moved the altar and sanctuary to a central location on the north side of the nave, installed a glazed meeting room in the former chancel and added an organ loft in a gallery in front of the tower. The C19 pews were replaced with chairs. In 2005, an extension, the Brewer Building, a glazed café with hall space above designed by Alan Pates, was added to the south side of the church, replacing an existing church hall dating from 1959. A nursery was installed to the east side of the church and the south gallery, now with vestry/sacristy and exhibition space below, was reinstated.

The church was the initial location for The Putney Debates which took place between 28 October and 11 November 1647, and which represent an important symbolic milestone in radical constitutional history. Following the Parliamentarian victory in the First Civil War, sections of the New Model Army, particularly those radicals characterised as the Levellers, agitated for a new constitution for England to include universal manhood suffrage and the primacy of a House of Commons elected every two years. Their demands were set out in a political manifesto 'An Agreement of the People' and their representatives were invited to debate the views at the General Council of the Army chaired by Oliver Cromwell. At the Putney Debates, Cromwell and the 'Grandees' of the army including Cromwell's son-in law, Henry Ireton, keen to pursue a moderate agenda whilst in negotiation over the restoration of Charles I, opposed the demand of the radicals. The Levellers' case was summed up by a statement by Colonel Thomas Rainsborough, 'For really I think that the poorest he that is in England hath a life to live, as the greatest he; and therefore truly, Sir, I think it clear, that every Man that is to live under a Government ought first by his own Consent to put himself under that Government; and I do think that the poorest man in England is not at all bound in a strict sense to that Government that he hath not had a voice to put Himself under'. Following the King's escape from Hampton Court on 11 November, and eventual resumption of the civil wars, the Putney Debates were concluded. A revised and less radical manifesto was substituted for the 'Agreement' and the Levellers were subsequently forcibly suppressed by the army command after a series of 'mutinies' over the next two years.

The first three days of the Putney Debates were transcribed by the secretary, William Clarke, but were not published at the time, only coming to light in 1890 at the library of Worcester College, Oxford. Debate continues as to their contemporary impact but there is no doubt as to their importance in the history of radical political ideas. A permanent exhibition commemorating the debates was installed in the south aisle of the church in 2007.

* Architectural interest: for surviving medieval fabric including the C15 tower, elements of the nave arcades and early-C16 Bishop West chapel; interest of early-C19 restoration and high quality of the 1980s restoration and 2005 extension;
* Historical interest: as the original location of the Putney Debates at the end of the First English Civil War in 1647, a major landmark in the history of radical politics;
* Interior: the Bishop West chapel has a fine example of late Perpendicular fan vaulting. There are also notable C17 memorials and collections of C17 and C18 ledger stones and C19 lead and brass coffin plaques employed as decorative elements in the 1980s restoration;
* Group value: as a prominent Thames-side landmark grouping with other listed buildings including Putney Bridge and Fulham parish church of All Saints on the other side of the river.