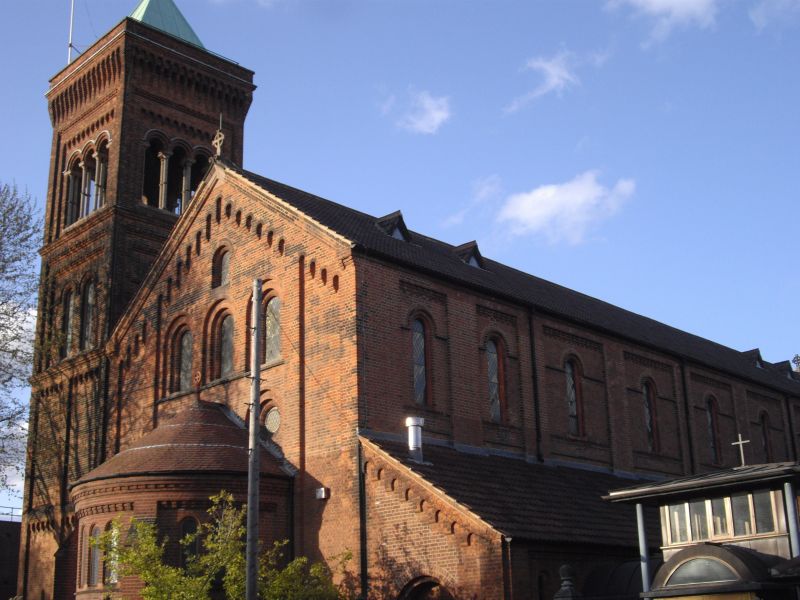 RAMSDEN ROAD SW12
1.
5033
Church of St Luke
TQ 2874 13/8
II*
2.
By F W Hunt 1883 in the manner of an Italian Romanesque basilica. The east wall
of the nave is partly blocked by the apsidal chancel and the west wall similarly
by the apsidal baptistery. The north-west entrance tower dominates the
asymmetrical composition. The whole is of red brick with sparing stone dressings,
tiled roofs and copper spire.
On the baptistery 3 panels recessed between lesenes are pierced by triplets of
lancets. Oversailing courses of alternate projecting headers decorate the upper
margins of the panels and form an eaves cornice below the conical slate roof.
The apse is similar but there are 5 panels and tripartite labels frame the lancets.
The nave bays are articulated with panels pierced by single lancets, the chancel
by a coupled lancet. The west end has a triplet of lancets, each in a triple-
stepped arch and a smaller lancet in the gable the whole framed by lesenes and
corbel tables.
In the tower the door has a triple-stepped arch with foliated tympanum framing a
Celtic cross. Lesenes and corbel table decorate the 2 lower stages, twin lancets
and oversailing courses the third stage, tripartite arcades of coupled colonnettes
the belfry. From within the richly machicolated parapet rises the square spire
with gilt cross.
The red brick interior has arcades with pointed arches springing from the stiffleaf
capitals of the stone piers.
The alabaster and marble pulpit (1890), chancel wall (1894) and lantern (1901) were
by 4 White, the tester, sedilia,stalls and bishop's throne by Harry Hems, the apse
mosaic and all glass by Powell. The metal electroliers (1903) are a striking
feature.
The south chapel was fitted by Martin Travers.